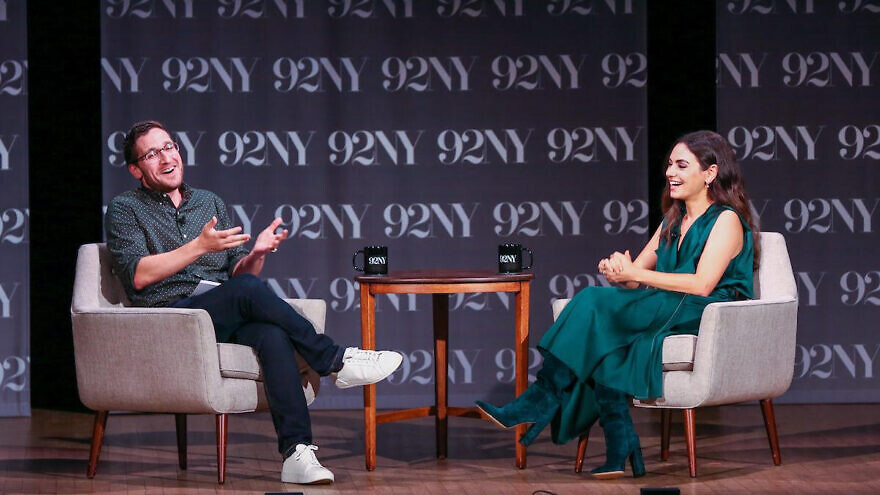 (October 4, 2022 / JNS) Jewish actress Mila Kunis has charmed millions of fans around the world, but did she charm her way into America?

After a screening of her new film “Luckiest Girl Alive” at the 92nd Street Y in Manhattan on Sept. 29, the star who rose to fame playing Jackie Burkhart on “That ’70s Show” told the crowd that, as a child, she strolled into the office of the woman who was to decide if her family would be allowed to go to the U.S. They’d been at the American embassy in Moscow for about 16 hours and she asked if she had any candy. The woman had something better.

“Long story short, she was like, ‘Welcome to America,’” Kunis recalled, saying she was about 7-years-old when her family received a religious refugee visa.

Interviewed by Josh Horowitz, who has covered film for MTV, she said her parents initially lied and told her they were moving across the street, but when they needed to take a train to the Moscow embassy, she realized it wasn’t true.

Kunis had her first on-screen kiss with Ashton Kutcher, who played Michael Kelso on “That ’70s Show.” The hit Fox program ended in 2006. Kunis and Kutcher got married in 2015 and have two children.

The couple donated funds and helped raise $35 million for Ukraine, where Kunis is originally from, and Kunis got choked up when she told the audience that her daughter, who is now 8, expressed pride in being half-Ukrainian when discussing the ongoing war in the country. Kunis said she returned to Ukraine about five years ago for a visit.

She famously starred with Natalie Portman in “Black Swan,” and said that film as well as “Forgetting Sarah Marshall” proved she could make it in movies. People had advised her to stick to television, but she didn’t listen.

Horowitz noted that Kutcher recently said his movie with Portman, “No Strings Attached,” was basically the same movie as “Friends With Benefits,” which starred Kunis and Justin Timberlake.

“We were better, but it’s no big deal,” Kunis said, drawing laughs.

With a screenplay by Jessica Knoll, whose best-selling book is the basis for the film, “Luckiest Girl Alive” stars Kunis as Ani Fanelli, who is in position to become a senior editor at The New York Times, though her husband wants to move to London. As the movie goes on, we see Ani struggle to deal with her trauma as a victim of sexual violence, and she is disturbed by rumors about whether or not she had a connection to a horrific high school attack that some did not survive. The film, which streams on Netflix starting Oct. 7, features one of Kunis’ strongest performances.

Kunis said the film’s voice-over is particularly important as the character relives her trauma. She called Knoll’s voice “incredibly specific” and said she chose to do the film because it is in part based on the writer’s real life.

As to whether she prefers comic or intense dramatic roles, Kunis said she has no preference.

“There’s an ego that comes with filmmaking,” Kunis said. “If anyone tells you otherwise, they’re lying. You want to entertain people and entertainment comes in a multitude of forms. … I love any form of escapism. … I don’t think you’re gonna walk out and be like, ‘Huh, what a popcorn movie for summer!’ But I think that you’ll walk out of it hopefully with some sort of feeling or emotion or desire to have a conversation.”