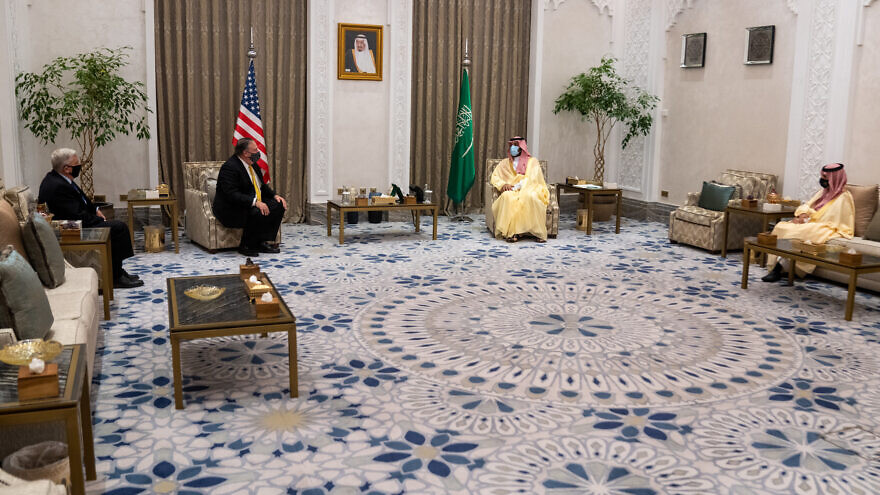 (November 25, 2020 / JNS) The private jet that took off from Israel on Sunday and banked south towards Saudi Arabia may have had some important passengers on board, but no one is talking about it. Israeli Prime Minister Benjamin Netanyahu and Mossad director Yossi Cohen reportedly met with Saudi Crown Prince Mohammed bin Salman while U.S. Secretary of State Mike Pompeo was visiting the kingdom. Netanyahu was reluctant to admit his presence at the meeting, saying, “I never talked about these kinds of things, and I will not start now. I’m committed to strengthening Israel.”

The visit by Netanyahu comes as Israel is ramping up ties with the United Arab Emirates and Bahrain. Last week, Bahrain’s foreign minister made his first official visit to Israel, and Netanyahu is reportedly going to visit the UAE and Bahrain soon. Why the sudden flurry of activity, and why did the trip to Saudi Arabia need to be so secretive?

Joshua Krasna, an expert on strategic and political developments in the Arab world at the Moshe Dayan Center, as well as a senior fellow in the Foreign Policy Research Institute, told JNS that while the common denominator is the issue of stopping Iran’s path to nuclear weapons, other important issues remain at play here.

“The issue here is mostly the United States,” he said. “Both Netanyahu and MBS were key—and high-profile allies of [U.S. President Donald] Trump—and made it clear until very late in the game when they, not very convincingly, tried to adopt an air of ‘neutrality’ that they preferred his re-election.”

According to Krasna, this was the reason MBS and Netanyahu met with Pompeo.

“They need to consult on how to jointly deal with an administration that will be less forgiving for Israel, and perhaps even hostile, for Saudi Arabia,” he said.

With Iran the main concern of both countries, Krasna said MBS and Netanyahu “may need to revive and re-tool the joint, active anti-JCPOA political and information campaign from 2015 in the U.S. against the possibility of an Iranian and U.S. willingness to return to the agreement.”

Krasna said Netanyahu “may have thought that he could rush the Saudi timeframe on formalizing relations, which doesn’t seem to have worked.”

Yoel Guzansky, a senior researcher at the Institute for National Security Studies, was slightly more cynical. He told JNS that Netanyahu is pressuring the Bahrainis and Emirates because he needs the photo op for any upcoming Israeli elections, of which there is currently speculation.

On Facebook, Guzansky posted that the meeting between the three leaders “did not occur in a vacuum.”

“For some time now, Riyadh has been preparing the ground in various ways for the possibility of normalizing its relations with Israel, and it is now considering possible prices and conditions, and the appropriate manner and timing,” he wrote.

With regard to Iran, Guzansky said the meeting “sends a message that the three countries are coordinated regarding the threats from Iran and the possibility of heightening the measures against it in what remains of the Trump presidency.”

According to Guzansky, Israel and the Gulf states fear that the United States under a Biden administration will work to reduce the sanctions pressure on Iran and even return to the 2015 nuclear deal without taking into account their concerns, “and therefore, they seek to be involved in any possible U.S.-Iran negotiations.”

In a recent meeting he had in the Gulf, Guzansky said senior officials there told him that “we need to be on the same page.”

By appointing former Obama officials to key positions, Biden has seemingly made it clear he plans to return, at least to some extent, to the policies of the that administration.

President-elect Joe Biden’s nominee for secretary of state, Antony Blinken, has previously said that the administration would likely keep sanctions on Iran in place. However, it’s no secret Biden has been critical of Trump leaving the deal and will likely seek ways to eventually re-enter or re-negotiate it.

Based on this, Guzansky believes MBS should take steps to prepare for a Biden administration and should wait before making any further gestures towards Israel with regard to normalization or even a surface partnership against Tehran.

“If I were MBS, he said, “I would wait a few months until the next administration enters the White House.”

“Israel wants to normalize with everyone,” he added. “We are not the question. The question is what price the Saudis will demand and what Biden will be willing to give. I am not sure Biden is willing to give as much as Trump did.”

He noted the Saudis “enjoyed an intimate relationship with the Trump administration,” but pointed out that with an incoming Biden administration, “it will be a totally different story now.”

Clearly, the meeting initially was secret but was purposely leaked to send a message.

Krasna pointed out that the outgoing administration, specifically Pompeo, may want to take action against Iran in the little time it has left.

“Perhaps the visit was aimed at a more specific and concrete goal of consulting on the advisability of such an action [or receiving updates],” he suggested. “In that case, the exposure of the meeting’s existence would make little sense.”

Krasna noted that there is also a political aspect at play with regard to the alleged meeting, saying Netanyahu “wanted to deflect public attention” from Defense Minister Benny Gantz’s announcement on Sunday that he is appointing a committee of inquiry into the submarine issue.

Netanyahu is currently under investigation in Israel over three cases of possible bribery and corruption. A fourth case, known as Case 3000, involves allegations of a potentially massive bribery scheme around Israel’s purchase of submarines from German shipbuilder Thyssenkrupp.

Krasna said that by keeping the meeting secret, the prime minister may have wanted to portray himself as “a diplomatic high-roller while again leaving his partners/rivals in the dark.”

If Netanyahu does make the trip to Bahrain next week, it “makes sense with the opening of diplomatic relations and also serves the political agenda,” said Krasna, “especially if he didn’t get quite what he wanted from Saudi Arabia.”