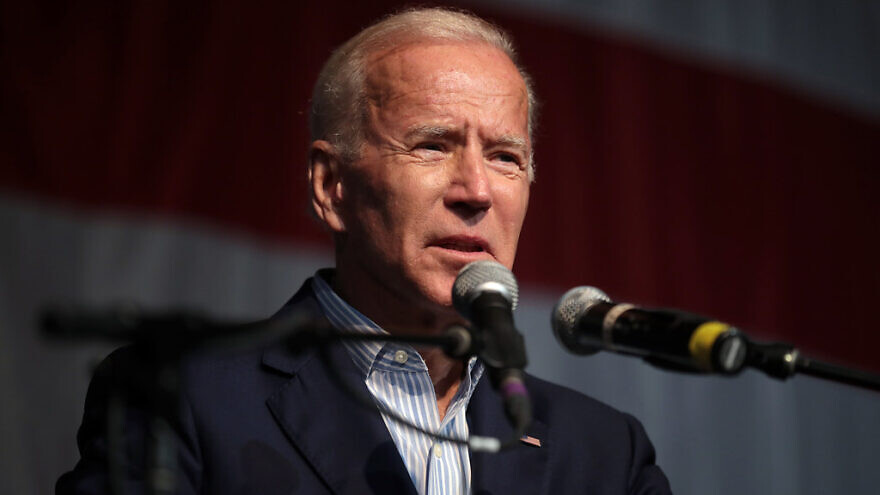 (June 17, 2020 / JNS) If elected president in November, former U.S. Vice President Joe Biden would have all U.S. sanctions on Iran stay in place, including the ones enacted under U.S. President Donald Trump, according to the presumptive Democratic nominee’s top foreign-policy adviser.

In a discussion during the American Jewish Committee (AJC) Virtual Global Forum on Wednesday with former Trump Deputy National Security Advisor K.T. McFarland, Tony Blinken, who was deputy secretary of state and deputy national security advisor under former U.S. President Barack Obama, said “Iran would have to come back into full compliance and unless until it did, obviously, all sanctions would remain in place.”

“And then, if we come back into compliance, we would use that as a platform with our partners and allies who would be on the same side with us again to negotiate a longer and stronger deal,” continued Blinken. “President Trump’s actions have had the unfortunate result, among others, of isolating the United States, not Iran. We need to flip that.”

Blinken’s remarks enhance Biden’s pledge that the United States would not re-enter the 2015 Iran nuclear deal until Tehran returns to compliance.

The United States withdrew from the nuclear deal in May 2018, reimposing sanctions lifted under it, along with enacting new penalties in what the Trump administration has called a “maximum pressure” campaign against Iran.

Blinken touted that Biden has “demonstrated in word and in deed an unshakable commitment to Israel’s security, including when he was vice president,” citing U.S. funding for the Iron Dome missile-defense system and the 10-year, $38 billion memorandum of understanding (MOU) between the United States and Israel agreed to in 2016.

Blinken reiterated Biden’s position that the former vice president would not condition U.S. assistance to Israel on the Jewish state expected to annex parts of the West Bank by July 1.

At the same time, Blinken criticized the Trump administration’s approach to Iran, including withdrawing from the nuclear deal and abruptly withdrawing U.S. forces from northern Syria in October in what critics called a betrayal of the Syrian Democratic Forces, as well as an opportunity for a power vacuum to be filled by Russia and forces loyal to Syria President Bashar Assad.

Blinken also censured the Jan. 3 U.S. strike that killed Iranian Maj. Gen. Qassem Soleimani at Baghdad International Airport, though he said “no one, of course, is shedding a tear over the demise” of Soleimani.

The former said that Trump has employed “anti-Semitic tropes” and encouraged elements of the far-right, citing the president’s reaction to the 2017 Unite the Right rally in Charlottesville, Va., which was marked by violence between far-right parties and protesters that led to the death of 32-year-old Heather Heyer after a 20-year-old man from Ohio rammed into a crowd of people with his car. Trump also now famously said that there were “very fine people on both sides” of the clashes.

Blinken reiterated Biden’s claim that Trump’s response to what transpired in Charlottesville inspired the former vice president to run for president.

“You’ll never have to wonder if Joe Biden is on the right side,” said Blinken. “He stood up to BDS on the left and to the far-right because he knows that anti-Semitism isn’t about where you sit on the political spectrum. It’s about right and wrong. He will do what’s right.”