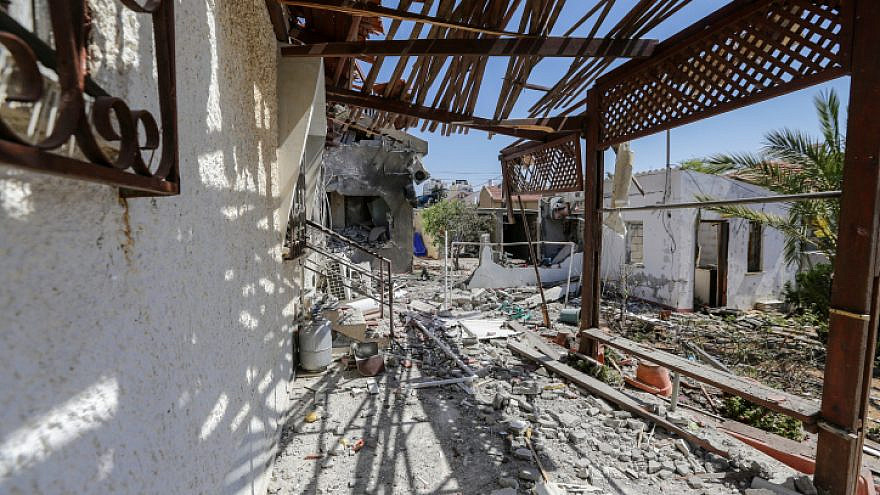 Damage to homes in the southern coastal Israeli city of Ashkelon, which were hit by rockets fired by Hamas in Gaza, May 12, 2021. Photo by Edi Israel/Flash90.
Republish this article
1061 WORDS
Spread the word.
Help JNS grow!
Share now:

(May 13, 2021 / JNS) On blog posts,  social media and statements to news outlets, Jewish groups from across the religious and political spectrums voiced concerns about the ongoing conflict in Israel and the Gaza Strip. As of Thursday, as many as 2,000 rockets had been fired by Hamas and Palestinian Islamic Jihad into Israel

While most Jewish groups support Israel’s right to self-defense and the efforts of the Israel Defense Forces amid the onslaught of rocket fire, some on the left decried its actions and laid the blame squarely on Jerusalem for instigating the violence.

“Rabbis in Israel, in the Rabbinical Assembly and the entire leadership of the Masorti (Conservative) Movement in Israel express their deep sorrow and anxiety in the face of the dangerous deterioration in the security situation,” said Rabbi Andy Sacks, director of Masorti’s Rabbinical Assembly in Israel. “We call on the public—from the bottom of our hearts—to join us in prayer. We pray for calmness of the spirit and for the restoration of peace.”

Orthodox groups also urged people to pray with the National Council of Young Israel, saying in a statement: “The pain and suffering that they inevitably feel is palpable, and the mental anguish caused by these abhorrent and interminable terrorist attacks is profound. We urge everyone to pray for a speedy conclusion to the incessant missile strikes on Israeli cities and encourage people to engage in Torah study in the merit of those who have tragically lost their lives or sustained injuries due to the rocket attacks.”

In a blog post, Rabbi Josh Weinberg, vice president for Israel and Zionism for the Union for Reform Judaism, expressed his solidarity with Israel. He said, “Israel does not want to enter Gaza, nor does it want to punish innocent Palestinians. It does, however, have an obligation to protect its citizens and must eradicate the sources of rocket fire from deep within the most densely populated area in the world.”

“No sovereign nation can tolerate such indiscriminate attacks on its civilian population.”

But, he continued, “ongoing incitement by both Palestinians and Israeli extremists is pushing the prospect of a two-state solution further and further out of reach.” He also noted concern about the “rapid escalation of violence within Israel’s own borders between Jewish and Palestinian citizens of Israel as a new and deeply troubling development.”

Rabbi Moshe Hauer, the executive vice president of the Orthodox Union, was one of several leaders of the organization to express their concern over the violence in Israel.

“We are deeply disturbed and saddened by this terrible violence as Eretz Yisrael remains under attack for yet another night, yet another day,” he said. “We pray for peace; we pray that Hashem give strength, wisdom and effectiveness to the chayalim, the soldiers of the IDF who defend the land, to do what needs to be done and to bring this to a quick end.”

Richard D. Heideman, president of the American Zionist Movement, issued a statement saying, “It is reprehensible that Israelis are once again forced to suffer from a constant barrage of terror missiles and incendiary terror devices. Precious lives have been lost and many others wounded as a result of countless rockets fired from Gaza by Hamas, Palestinian Islamic Jihad and other designated foreign terror organizations with the support of the Islamic Republic of Iran, the world’s worst state sponsor of terror.

“No sovereign nation can tolerate such indiscriminate attacks on its civilian population,” he continued. “The international diplomatic community must stand with Israel and her right to defend herself and her people from terror.”

“This continued assault underscores the need for the world to hold these purveyors of hate, violence and terror accountable.”

The Conference went further and blasted Hamas and its terror-sponsor Iran for waging war on Israel.

Iran and its terror proxies “seek to annihilate the Jewish state and the Jewish people, while sowing chaos across the Middle East in relentless pursuit of regional hegemony,” it said. “This continued assault underscores the need for the world to hold these purveyors of hate, violence and terror accountable.”

Criticizing the Jewish state, even the president

The left-leaning lobbying group J Street released a statement that said, in part: “We unequivocally condemn indiscriminate rocket attacks by Hamas and other militant groups and support Israel’s need to defend its citizens. We have also repeatedly seen that there is no ultimate military solution possible to this crisis, and that these escalations and intensive Israeli strikes cause devastation for the people of Gaza without ending the long-term threat of more rocket attacks.”

The group urged the Biden administration to “take urgent, proactive and decisive steps to de-escalate this crisis and to secure an urgent ceasefire. The U.S. government can and must be heavily involved in bringing a halt to this violence, and in helping to address its persistent root causes, including the ongoing occupation, and the eviction and dispossession of Palestinian families in East Jerusalem and the West Bank.”

At least one group went further, putting the blame squarely on Israel.

On Twitter, the Jewish Voice for Peace Action, which bills itself as a “multiracial, intergenerational movement of Jews and allies working towards justice and equality for Palestinians” repeatedly praised anti-Israel supporters like Reps. Rashida Tlaib (D-Mich.) and Ilhan Omar (D-Minn.), and pummeled the Jewish state. (The like-minded group Jewish Voice for Peace, a left-wing activist organization in the United States that focuses on the Israeli-Palestinian conflict, often focuses on anti-Israel campaigns on college campuses.)

It even criticized U.S. President Joe Biden, who said earlier on Wednesday that he had talked to Israeli Prime Minister Benjamin Netanyahu and hoped that the crisis would end soon.

“@POTUS, it’s hard to imagine how this going to be ‘closing down sooner than later’ when you didn’t even mention speaking with the Palestinians, you’re stonewalling action from the UN, and you’re encouraging the Israeli government to bomb an open-air prison,” the group tweeted.