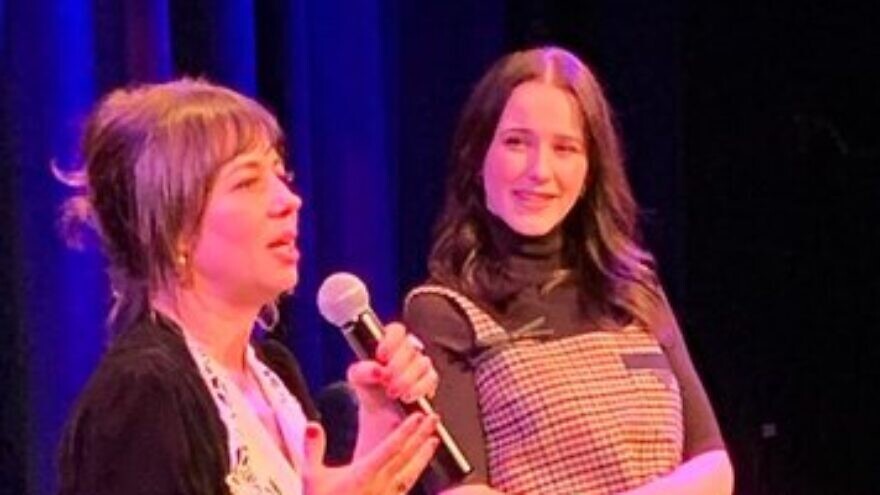 (November 28, 2022 / JNS) “Getting pregnant for the first time at forty-two can be a little dicey,” comedian Natasha Leggero writes in her hilarious, inspiring and at times heartbreaking new book, “The World Deserves My Children.”

On Nov. 17, at Manhattan’s Symphony Space, the comedian and actress discussed her book with Rachel Brosnahan, who stars as Midge Maisel in the Amazon hit “The Marvelous Mrs. Maisel.”

At one point Leggero, who converted to Judaism as an adult, teared up while explaining that she and her husband Moshe Kasher tried IVF, she had a miscarriage and of the eggs she froze, there was only one viable egg left. But it worked, and she gave birth to a daughter who is now 4 years old.

“I quite literally read sections of this book to my husband,” said Brosnahan, who does not yet have children but said she identified with many of the questions and concerns in the book because she is grappling with them as well.

Leggero writes that she loves throwing parties, and one thing she loves about being Jewish is that “Jews have a party where we drink wine, eat bread, and your husband blesses you EVERY FRIDAY NIGHT!”

The book is peppered with zingers such as, “If I ever want to do something luxurious like condition my hair or eat a sandwich, I have to schedule it during my daughter’s naps. Well, I have a nanny now. But I have to write this book to pay for her.”

She also writes that “only Christians and Hasidic Jews are getting married in their twenties….our mothers put their lives on hold to raise children, but the paradigm has shifted.”

Brosnahan said a passage of the book she found to be funny was when Leggero wrote that she found her husband washing the dishes and their daughter in the sink at the same time.

Leggero admitted during the program that she feared becoming a parent might change her.

“We don’t become parents to stay the same,” she said. “The main thing to take away is that women should be freezing their eggs by 38, if you could afford it.”

Leggero said she was never fearful and would go water-rafting and would on a whim get $900 worth of vaccine and go to Africa, but as a mother she is more reserved.

What does the author hope people will take away from the book?

“You don’t need to have kids with whatever loser you’re dating when you’re 23,” Leggero said.

She said her husband is good at cooking and likes to drive. In a chapter of the book where she interviews her husband, he said he views himself as the “Chief Fun Officer.”

Leggero told the crowd that she has to work on saying “no” to her daughter. “If she’s ever crying I’m like, ‘Do you want an ice cream sundae?’”

During the program’s Q&A portion, Leggero, who noted she will soon be on a 15-day tour, said she still has much to do in her career, while Brosnahan said she doesn’t believe any actors should rest on their laurels.

“I don’t know that you ever reach that point where ‘I’ve made it, let me just look down at everyone,’” she said. ‘It’s nice. It keeps you hungry, it keeps you ambitious.”

At the end of the event,  as if it were from a scene of “The Marvelous Mrs. Maisel,” a man and woman who appeared to be drunk strolled in late to the event and made incoherent jokes.

Leggero told the crowd it was her parents, which was a joke that garnered applause. The inebriated pair claimed they thought a different show at the same venue that they thought was an opening act for them and Legerro questioned why it would take more than an hour to figure that out.  At first, some thought it was part of an act, but it soon became clear that it was simply a couple of drunk fans. Nobody asked them if they have kids.