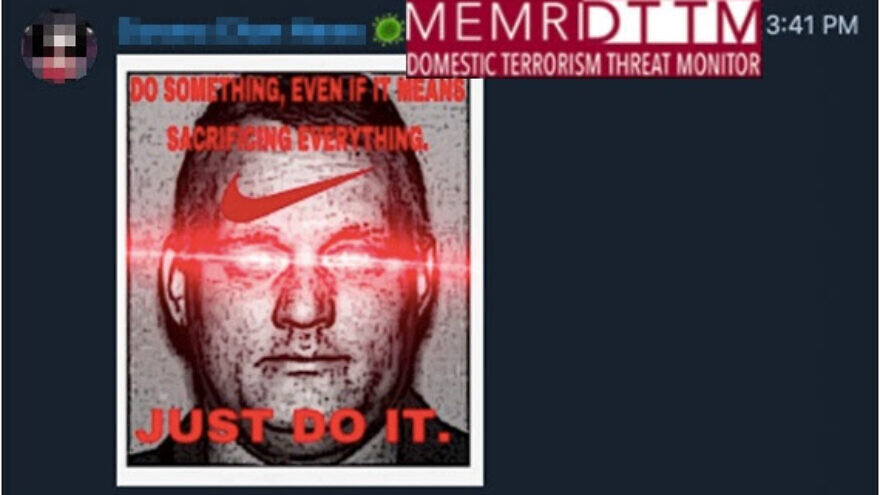 A Telegram channel that posts racist and anti-Semitic content shared a post showing Bowers with eyes glowing and the text, "Do something, even if it means sacrificing everything" with the Nike motto "Just Do It." Credit: MEMRI Domestic Terrorism Threat Monitor.
Spread the word.
Help JNS grow!
Share now:

(October 28, 2020 / JNS) Neo-Nazis are using the platform Telegram to celebrate the second anniversary of the 2018 attack on the Tree of Life Synagogue in Pittsburgh, Pennsylvania—in which 11 worshippers were killed and seven wounded—the Middle East Media Research Institute (MEMRI) reported on Tuesday.

Among the celebratory posts is a rap video titled “[redacted] ft. Robert Bowers—Spinning Dreidels,” referring to the accused perpetrator of the attack. The video includes a threat to Migration Policy Institute cofounder and Board of Trustees member Kathleen Newland.

“Kathleen Newland head of Migration Policy Institute, a Washington D.C.-based think tank, she’ll be drawing a blank without half her brain. … I’m shooting at these p****y kikes ’til I’m shooting blanks, I found your address in the white pages bitch,” it says.

According to MEMRI’s Domestic Terrorism Threat Monitor, one neo-Nazi Telegram channel posted: “Happy screw your optics day! Heil Saint Bowers.” (“Screw your optics, I’m going in” was Bower’s last post on Gab prior to the attack.)

Another channel posted an image of Bowers behind bars, with the text “POW KIA my head is bloody, but unbowed” and a swastika. 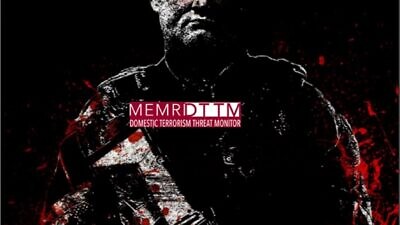 One neo-Nazi Telegram channel posted: “Happy screw your optics day! Heil Saint Bowers.” “Screw your optics, I’m going in” was Bower’s last post on Gab prior to the attack. A stylized graphic included in this post shows Bowers armed with a rifle. (MEMRI)
Republish this article in your newspaper or website