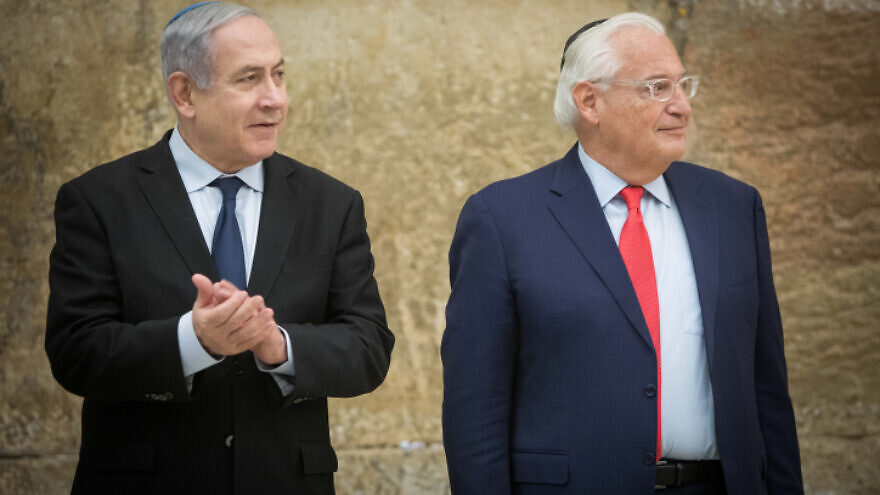 Israeli Prime Minister Benjamin Netanyahu and U.S. Ambassador to Israel David Friedman at the Western Wall in the Old City of Jerusalem on the first night of Hanukkah, on Dec. 22, 2019. Photo by Noam Revkin Fenton/Flash90.
Spread the word.
Help JNS grow!
Share now:

The agreement expands scientific and academic cooperation between the two countries to include projects in Judea and Samaria and the Golan Heights.

Israel formally annexed the Golan Heights in 1981, and the United States recognized its sovereignty there on March 25, 2019. Judea and Samaria remain disputed territories and were divided into non-contiguous zones (“Area A,” “Area B” and “Area C”) of varying Israeli or Palestinian administrative and security control under the 1993 Oslo Accords.

In a reversal of previous U.S. policy, U.S. Secretary of State Mike Pompeo announced in a press conference on Nov. 18, 2019, that Israeli communities in Judea and Samaria were not necessarily illegal under international law. Prior to the signing of the Abraham Accords on Sept. 15, Israel planned to extend its sovereignty to parts of Judea and Samaria under the aegis of the U.S. “Peace to Prosperity” plan.

Speaking at the signing ceremony, Netanyahu expressed his gratitude to Friedman, saying the envoy had “done it again.”

“We deeply appreciate all your efforts on behalf of the Israeli-American alliance to right past wrongs, to put things on the right course,” said Netanyahu.

The Israeli premier also thanked Science and Technology Minister Yizhar Shai, as well as his predecessor, current Regional Cooperation Minister Ofir Akunis, for their role in the agreement.

That the ceremony was taking place in Ariel was of “huge significance,” said Netanyahu, who called it a demonstration of U.S. commitment.

“When the U.S. recognized Jerusalem as Israel’s capital and moved the embassy here, the naysayers said that the American action would destroy the chances of peace,” said Netanyahu. “That’s a modest quote, believe me. There were even more extreme [ones].”

By rejecting the failed mantras of the past, the Trump administration had not only paved the way for the historic agreements with the United Arab Emirates, Bahrain and Sudan, but also a “realistic” solution to the Israeli-Palestinian conflict. It had also, he said, opened Judea and Samaria up to “academic, commercial and scientific engagement with the United States.”

“This is an important victory against all those who seek to delegitimize everything Israeli beyond the 1967 lines,” he said.

“I am confident that this new agreement will help accelerate more scientific research in the years to come. So in signing this agreement here in Ariel, we are not only doing so for the benefits of both the people of Israel and the people of the United States, but for benefit of the entire world.”