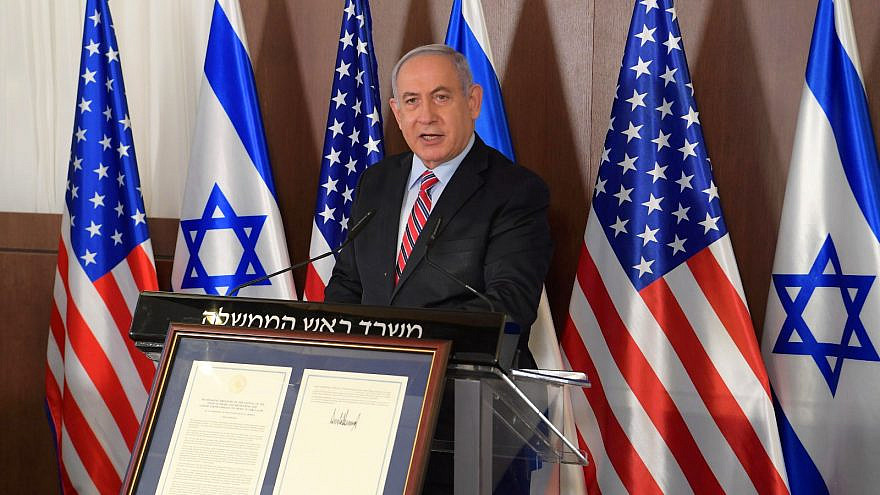 (December 7, 2020 / JNS) Israeli Prime Minister Benjamin Netanyahu on Sunday thanked U.S. President Donald Trump for his great support for the Jewish state, saying that his recognition of Jerusalem as Israel’s capital in 2017 would go down in history with President Harry S. Truman’s recognition of the State of Israel.

“The proclamation will now be prominently displayed on the wall of Israel’s Cabinet room here in Jerusalem. It will be displayed alongside President Harry S. Truman’s 1948 proclamation recognizing the newly established State of Israel. These two historic proclamations will never be forgotten,” he said.

The Israeli premier noted that as significant as that recognition was, it was but one of many historic decisions that Trump made during his presidency.

“He recognized Israel’s sovereignty over the Golan Heights. He recognized Israel’s legitimate rights in Judea and Samaria, proposed a realistic peace plan that acknowledges those rights and maintains Israel’s ability to defend itself. He forged the historic Abraham Accords, which ushered in a new period of peace that is dramatically changing the face of the Middle East before our very eyes,” said Netanyahu.

“He withdrew from the dangerous Iran nuclear deal, placed crippling sanctions on Iran and took out the world’s most dangerous terrorist, Qassem Soleimani. And, of course, he brought the U.S.-Israel alliance to unprecedented heights,” he added.

“For all this and more, thank you, President Trump.”