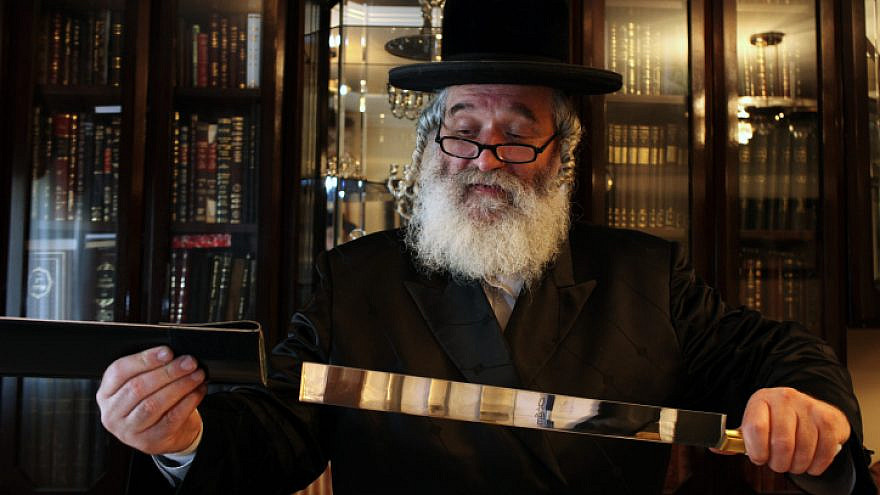 A view of a knife used for kosher slaughter by Rabbi Yitzchak Eliezer Yakav at his home in Jerusalem Jerusalem on June 12, 2011. Photo by Kobi Gideon/Flash90.
Spread the word.
Help JNS grow!
Share now:

(February 1, 2021 / Israel Hayom) Israeli Prime Minister Benjamin Netanyahu has written to a number of European leaders, asking that they allow ritual kosher slaughter to continue in their countries.

The letter went out to the leaders of Poland, Finland, Portugal, Spain, Italy, Germany, Hungary, Ireland, France, the office of the E.U. presidency and the president of the European Council. Some of the countries on this list have already begun passing laws to ban kosher slaughter on the grounds that it constitutes cruelty to animals.

Netanyahu reached out after Diaspora Affairs Minister Omer Yankelevich requested his help following an E.U. court ruling that upheld a Belgian ban on the Jewish practice.

Netanyahu expressed his concern with the court’s ruling.

“This decision threatens Jews’ freedom of religion across Europe. Jewish leaders in Europe and heads of Jewish institutions have expressed shock and this ruling and its harmful ramifications for the continuance of Jewish life in the European Union,” wrote Netanyahu.

Isaac Herzog, chairman of the Jewish Agency for Israel, also sent a message to European leaders, explaining that he explained that he wanted to “call their attention” to the sense of discomfort and rejection that was “spreading among a number of [Jewish] communities that feel that Jewish tradition and the fulfillment of the commandments are being challenged by certain parts of the European public and its lawmakers.”

“We are talking about a pillar of the Jewish religious commandments, and there is no room for compromise,” he wrote.