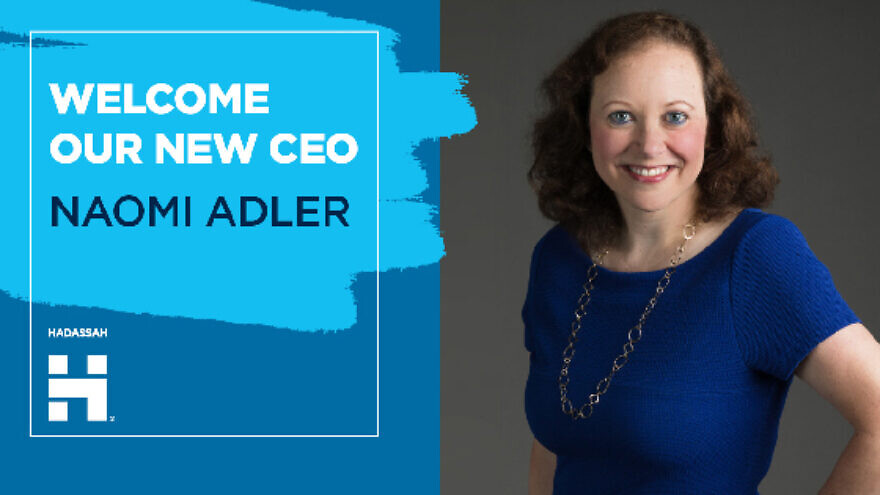 (October 1, 2021 / JNS) Naomi Adler’s connection with Hadassah began two decades before she was even born, when noted cantor Hugo Chaim Adler and his wife, Selma, stepped off the ship in New York—a ship that had taken them from their home in Germany via London.

Arriving in the United States, Hadassah was one of the core organizations that embraced Adler’s paternal grandparents. The year was 1939, just months before the Nazis began rounding up the rest of the Jews of their town of Mannheim.

But as a child, hearing the story of her family’s escape to freedom, Adler could not have dreamed that someday she would head up the very organization that helped her grandparents in their earliest days as refugees.

On Sept. 1, Adler began her work with Hadassah, the Women’s Zionist Organization of America, after former CEO Janice Weinman retired earlier this year. With nearly 300,000 members, donors and supporters, it is the country’s largest Jewish women’s organization. 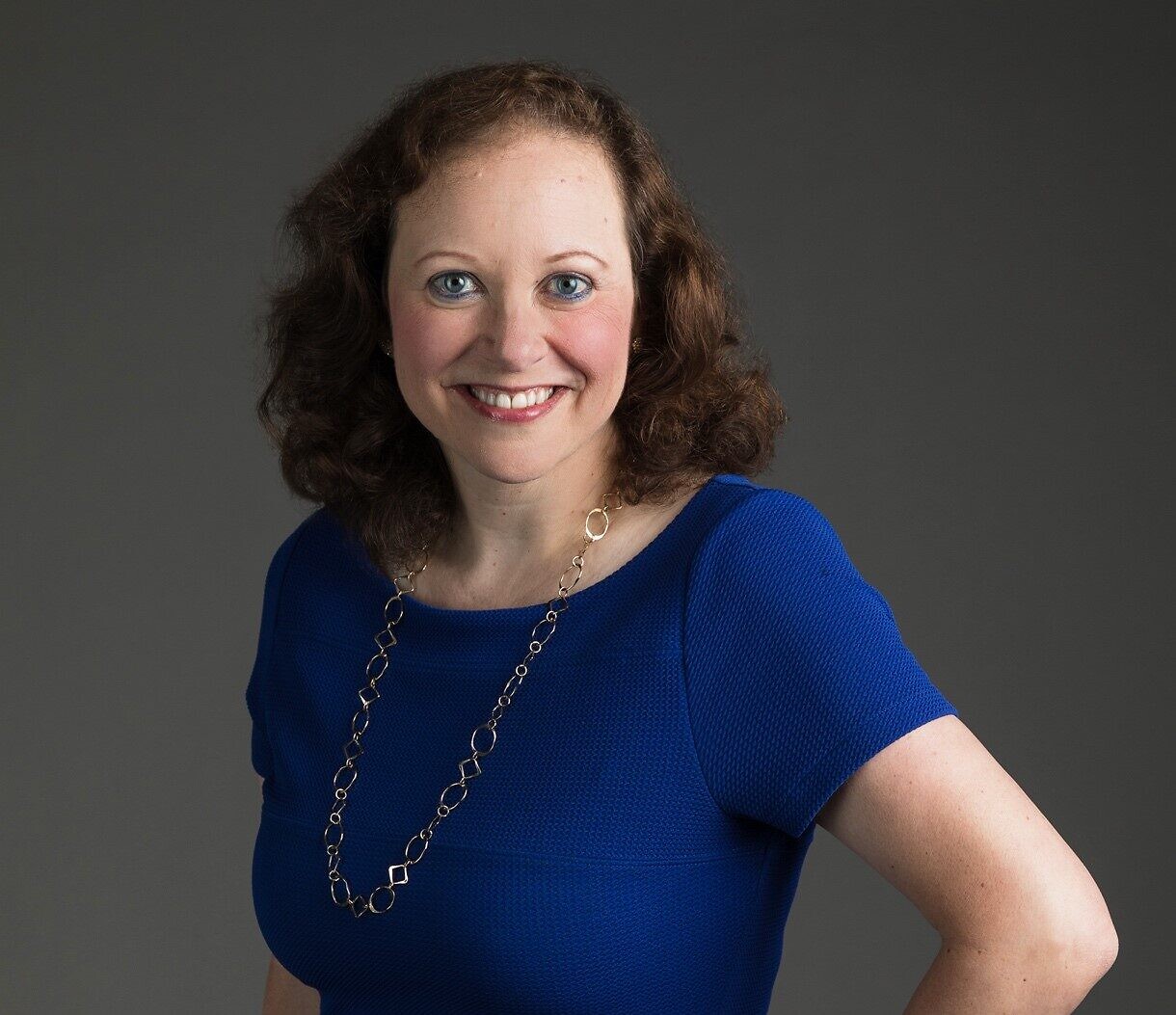 ‘The art and science of fundraising’

Adler, 55, comes by the role naturally—not just as a family legacy but as a logical progression of her own professional journey, her principles and her passions.

Born in 1966, Adler grew up in Rochester, N.Y., the daughter of two high-achieving parents—composer-conductor Samuel Adler and writer/poet/publisher Carol Adler, who took up the profession after finding the gates of Reform rabbinical school closed to her in the late 1950s.

After earning degrees from Mount Holyoke College and the University at Buffalo School of Law, Adler returned home to Rochester, where she served as assistant district attorney for Monroe County, specializing in fighting for the rights of victims of domestic and elder abuse. The next opportunities destined to grow Adler’s commitment to the underserved were running two New York United Ways for a total of 13 years—first the United Way of Rockland County, then the one in Westchester and Putnam. It was in these jobs that Adler kick-started initiatives to combat poverty and led recovery and planning efforts in the wake of 9/11 and several natural disasters.

“While growing up and in these United Ways, I saw how often it was the Jews who were the board members and the advocates for important causes for change,” says Adler. It was a sensibility she took with her into the Jewish Federation of Greater Philadelphia, where she would spend the next six years as president and CEO.

Adler has also testified about anti-Semitism, charity tax policy, health care and emergency services, including before the Congressional Ways and Means Committee, and was nationally recognized for her work during hurricanes Sandy, Irene and Lee.

Adler’s sensitivity to those in need and her ability to help put safety nets in place impressed Philadelphia Federation board member Rena Kopelman. “Hadassah is lucky to get her,” says Kopelman, who runs the Kopelman Foundation with her husband, Josh, and worked closely with Adler on the Federation’s strategic plan. “Besides being deeply connected with the Jewish world and especially women’s issues, she’s a skilled listener and relationship-builder committed to Israel and bridging the gaps between it and Diaspora Jewry.”

“Each position I’ve served in has taught me something crucial,” she says, “including how to lead in the midst of pressure and how to integrate and empower volunteers, who are such an integral part of organizational life.”

It was in her years of United Way leadership that Adler also began to enjoy fundraising, an aspect of nonprofit CEO work that many others find burdensome. “I love the art and science of fundraising, creating deep relationships with those who can make a philanthropic difference,” she says. “It takes time to get to know each person and what matters most to them, but finding the right project that makes them feel like they’re changing the world is the greatest mitzvah.” 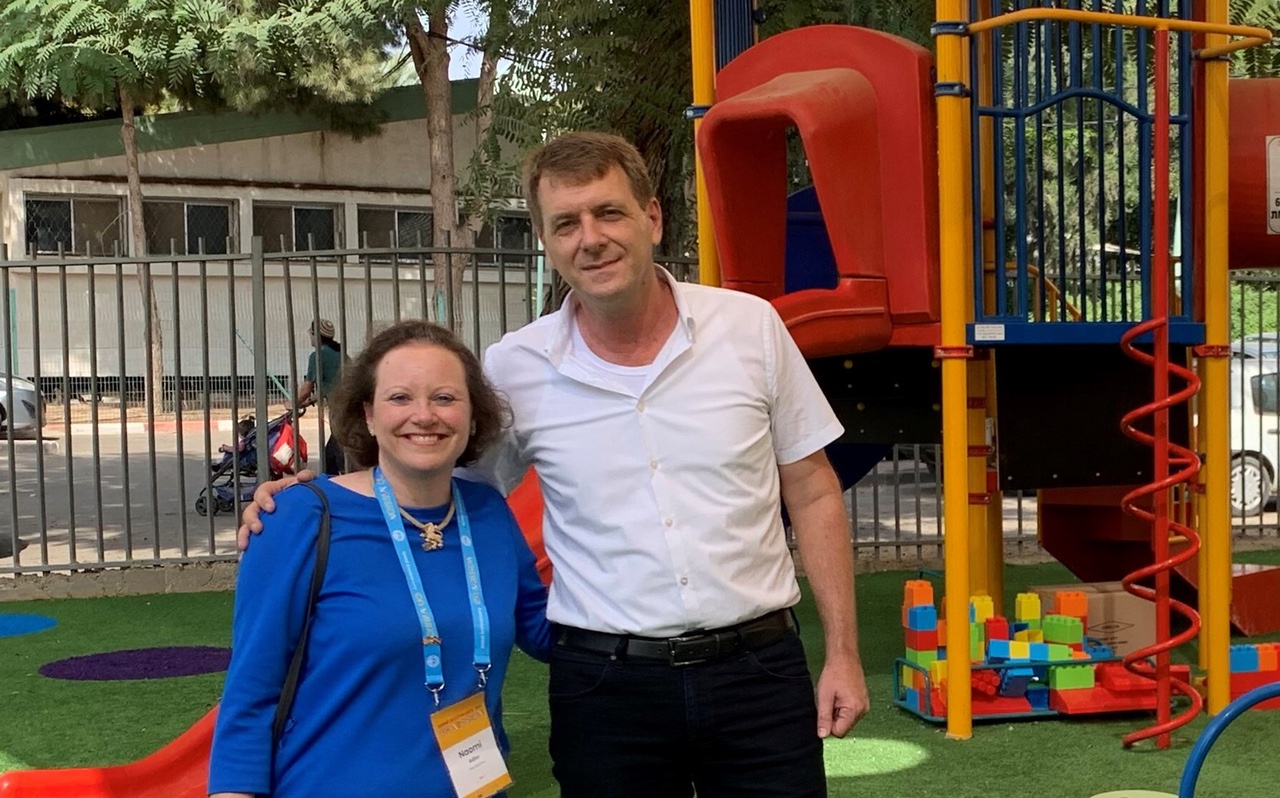 Naomi Adler and Tamir Idan, chairman of the Sdot Negev Regional Council, are standing in front of an accessible playground funded by the Jewish Federation of Greater Philadelphia. Credit: Courtesy.

‘Stronger because of it’

During the interview process, “we had so many well-qualified applicants,” says Hadassah president Rhoda Smolow. “But after the last round of interviews, we all looked at each other and said: ‘Naomi.’ ”

What qualities were they seeking in a CEO that they recognized as personified by Adler?

“We knew we needed someone who would engage not only our members but new women, too,” says Smolow. “From the beginning, we were impressed with Naomi’s warmth, her communication skills, her track record of innovation, strategic thinking and visionary philanthropy. We all felt it was a great shidduch.”

And taking on a big job like this one comes at a propitious time for Adler; with her three sons away at college, she and her husband, Rabbi Brian Beal, are freshly minted empty-nesters.

Adler is also taking the reigns of Hadassah at a pivotal time—13 years after it found itself one of the 37,000 investors, many of them Jewish institutions and organizations, bilked by Bernie Madoff’s infamous Ponzi scheme. With $50 billion in investor money lost, the scam is widely believed to be the largest scandal in Wall Street history. For Hadassah, it meant returning $45 million to other investors, just under half of the total the organization earned over the years. In the wake of the scandal, Hadassah also let go of about a quarter of its national staff and sold its longtime New York headquarters. (A postscript: Earlier this year, Madoff died in a medium-security prison at the age of 82 while serving a 150-year sentence.) 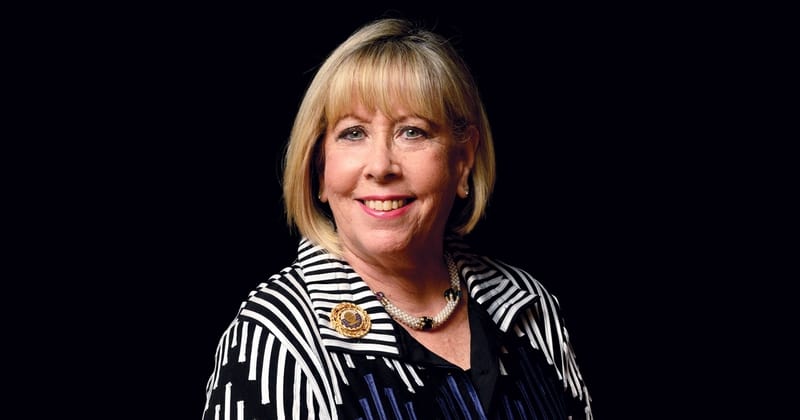 Has the organization bounced back? “Very much so,” says Adler. “Thankfully, in the last 13 years, many people who believe in Hadassah’s mission have stepped up and supported it.”

“Over the years, we’ve seen Hadassah become stronger because of it,” adds Smolow. “We got through that, and we’ll get through the COVID crisis, too. Naomi is the kind of visionary leader who will guide Hadassah to grow even stronger.”

‘Foot soldiers in the war against anti-Semitism’

While serving Philadelphia’s Federation, Adler visited Israel more than a dozen times and worked on joint programs with other Israeli nonprofits. “Looking at Hadassah’s programs there—beginning with the hospital and its many health-care outreach programs and internationally renowned research into breast cancer and genetic diseases, these help Israel shine,” she says. “This includes groundbreaking COVID-19 research and introducing innovative-type care now in use around the world.”

Like everything at the Hadassah Medical Center, these are provided to every patient who needs them, she adds. “They treat each person, no matter what their background, with respect and medical excellence. So every single day, what they do there makes peace as a true expression of tikkun olam, ‘repairing the world.’ The kind of work Hadassah does in Israel takes the politics out of Zionism.”

Other Israel priorities Adler will be helping oversee include the organization’s two youth villages; more than 300,000 youngsters from 80 countries have been housed and educated in the Jewish state over the last 87 years. Most recently, the children and teens have come from Russia and Ethiopia, as well from dysfunctional or very poor families.

One Israeli leader looking forward to working with Adler is Amira Ahronovitz, CEO and director general of the Jewish Agency for Israel. “As a member of our board of governors, Naomi impressed me as a true visionary leader, with a great place in her heart for both the Jewish people and Israel,” said Ahronovitz, who spoke by phone while en route to pick up her soldier son for the holidays. “What’s unique about Naomi is her ability to connect with those from different sectors of Jewish life as a strong leader with both a sensitive ear and a sensitive heart. In this new role, she will be a force to unite a variety of voices in harmony.”

Another Hadassah focus is fighting the scourge of anti-Semitism, currently on the rise around the globe, including in Europe, the United States and Canada.

“We are 300,000 strong, foot soldiers in the war against anti-Semitism,” says Smolow. One recent example: Hadassah’s lobby efforts against the NEA (teacher’s union) resolution containing anti-Israel language. “Naomi will strengthen our position even more with her plans for partnering with other solution-based Jewish organizations.” 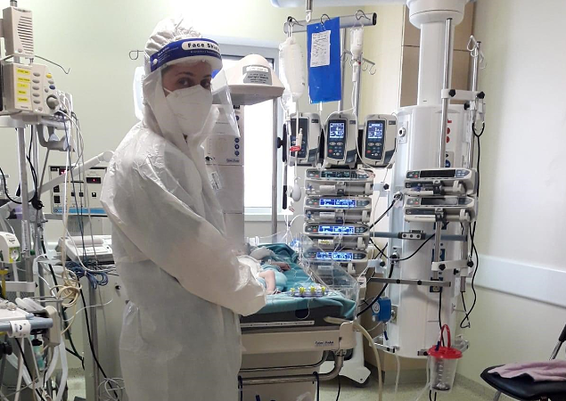 “The organization’s reputation and accomplishments speak for themselves,” says Adler. “And now, we also have the chance to deepen the Hadassah vision of the future.”

One way she expects to accomplish this is “to work with our volunteer leaders and members to invite in more women who have never been associated with Hadassah before, including men, who are also committed to sharing in and supporting Hadassah’s vision; the opportunity to make lives better for women and families; to create new opportunities for our youth; strengthen our bonds with Israel; and protect and defend the Jewish people from the forces rallying against us.”

“The most powerful tool we have to accomplish all this? It’s our amazing volunteer leaders and professional staff. It’s my hope that my role expands Hadassah’s footprint.”

Getting involved with Hadassah, she says, transcends both geography and politics. “I want people to understand we’re both a vehicle to advocate for the causes they care most deeply about and emerge as a leader and also that they can move from Dallas to Rochester and know Hadassah is there waiting for them, inviting them to be part of something important. And that no matter what their politics and beliefs, they will be accepted and cherished.”

A half-century after learning of the organization’s life-giving role in helping her own family adjust to their new life in America, Adler came upon an image that helped crystalize the Hadassah mission for her. “I was researching the organization before my first interview, and I saw a photo of women standing on the street holding Hadassah signs. They were young and old, and of different races,” she says. “But the looks on their faces spoke of positive movement and strength in unity, of being there together. For me, Hadassah—and Judaism itself—is about inculcating that commitment of standing strong together. I knew then that I wanted to be a part of that.”

“Naomi is someone who’s always dreaming and visualizing what the future can bring,” adds Philadelphia activist Kopelman. “I’m really looking forward to seeing where she will take the organization.” 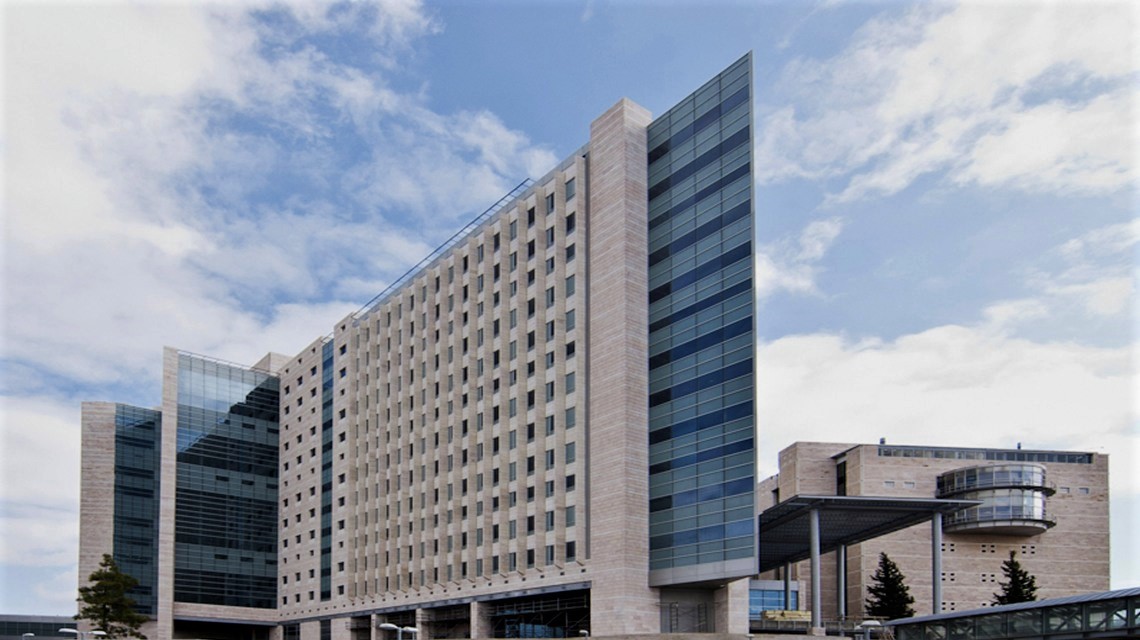 The Sarah Wetsman Davidson Tower at Hadassah Hospital in Jerusalem, one of many amenities the medical center has to offer. Credit: Hadassah International.
Republish this article in your newspaper or website