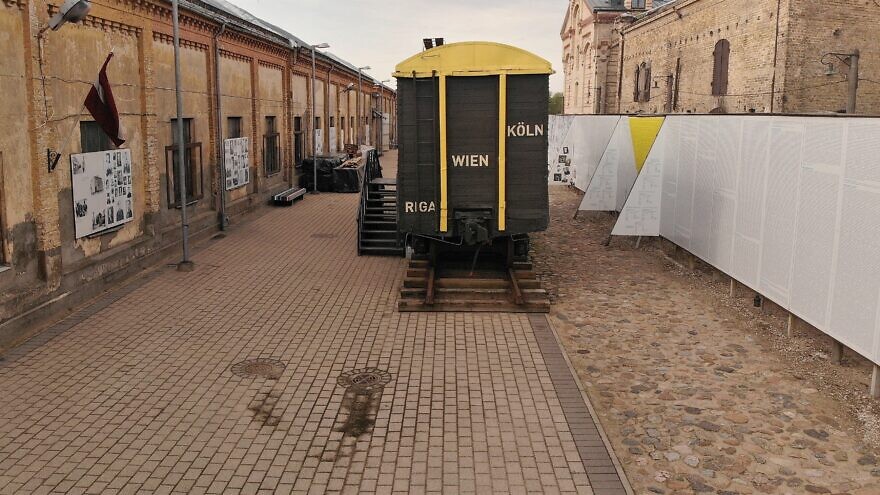 A railroad boxcar or cattle car used by the Nazis to transport Jews during the Holocaust is on view at the Riga Ghetto and Latvian Holocaust Museum. Credit: Shamir Association.
Spread the word.
Help JNS grow!
Share now:

(October 28, 2020 / JNS) The City Property Committee of the Riga City Council met on Tuesday to review the terms of a new land-lease agreement with the Riga Ghetto and Latvian Holocaust Museum. After several hours, the committee decided to revise its proposed rental agreement, which, according to museum officials, would have forced the 10-year-old museum to close.

According to the decision, the museum will remain on the property free of charge.

The previous proposal had stipulated a monthly rental fee of 10,000 euros. In addition, the new agreement requires that the area taken up by the museum be reduced by 300 square meters—a reduction from the 600 square meters originally requested by the neighboring businesses.

This will allow the museum to keep its main exhibition, Ghetto Street, as is. The memorial wall lists the names of nearly 75,000 Latvian Jews and 25,000 Jews from European countries who were brought to Riga to be murdered during the Holocaust.

The Shamir Association, which operates the museum, thanked the council for choosing to maintain the agreement. In doing so, the council is demonstrating its commitment to preserve and honor the memory of those who perished here during the Holocaust.

The decision regarding the transfer of property owned by the municipality in unremunerated use will take effect once it is approved at the Riga City Council meeting in early November.

The Riga Ghetto and Latvian Holocaust Museum is internationally recognized as one of the capital’s most important landmarks. It houses nine permanent exhibitions and an education center, and has welcomed nearly 200,000 visitors from around the world.