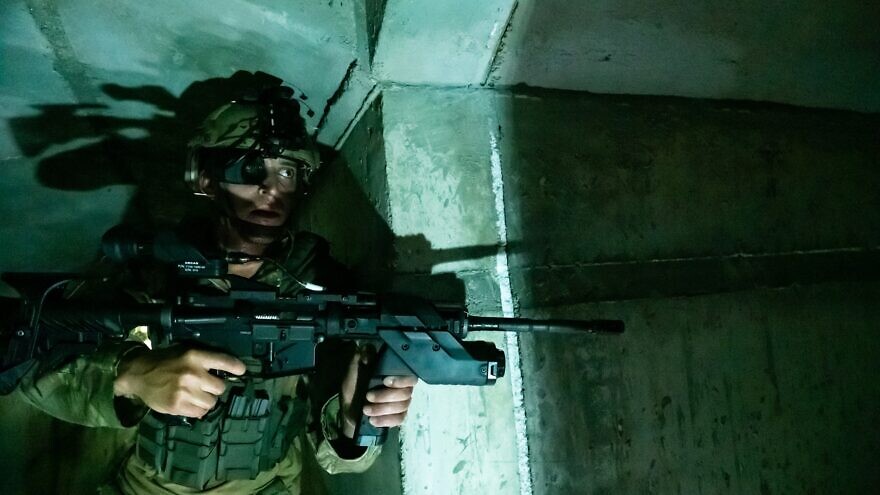 The system, called Assault Rifle Combat Application System (ACRAS), is “a step-change in the lethality, mission effectiveness and survivability of dismounted soldiers in both day and night,” said the company.

It provides infantry and special operation forces with combat capabilities not available to them before, such as measuring ranges to targets without a laser, automatic ballistic correction, detection of enemy fire sources, video motion detection and even the ability to shoot around the corner and from the hip.

The system presents data through the rifle’s sight or an optional digital eyepiece display.

It links up with a platoon’s command and control network for sending and receiving combat information, provides navigation assistance, conducts friend or foe identification, and tracks gun stoppages.

Elbit company representatives told JNS that the system works by integrating an AI-powered computer into the assault rifles’ forward grip, which then runs software and a range of applications. The miniaturized computer unit receives and processes data collected from the soldier’s field of view via the gun sight. It can also receive data from other ARCAS users on the team.

“Today, when you look at modern militaries, you mostly see big technological developments in aircraft, tanks and computing. Less so with the individual user,” said Arie Chernobrov, general manager at Elbit Systems ELSEC factory in Sderot.

“On the other side of the spectrum, the soldier has remained with a rifle and not much more. This, in an era when the entire world is equipped with cell phones that can navigate, communicate with video and offer endless applications to connect to the world from the palm of your hand,” he added. “We want to make this technology available for individual soldiers.”

Chernobrov added that the system is designed to improve three capabilities: survivability, situational awareness and lethality.

“We wrapped these capabilities into a single package and placed it onto a firearm. This is our organizing principle. Today, there are many militaries in the world that understand the need to improve modern individual soldier capability,” he stated.

‘The system will guide their aim’

Israel Grinwald, vice president of the business unit for infantry and special forces at Elbit’s ELSEC, noted that many countries are upgrading individual soldier capabilities, such as Britain, Switzerland, Norway, Spain, Singapore, Denmark and others.

“They all want something similar—a computer on the soldier’s firearm,” he said. “They want a connection to the command and control network. The problem has been that soldiers are not able to get to this data. They did not have a helmet displaying data. They could not create intelligence and move it to unit headquarters.”

It is this problem that inspired the creation of ARCAS, he said.

“ARCAS is based on AI,” he explained. “It provides the ability to hit targets harder and better—the ability to hide behind cover and fire. This can create surprises for the enemy. It provides situational awareness to know where I am and where my friends are. It can interface with any weapons.”

Soldiers can choose a variety of applications to display data to them, such as GPS, communications and target data. A unit commander can switch on a navigational application, and a machine gunner can use the motion detection application.

A battery pack and a camera are placed on each weapon along with the small computer, while soldiers can also receive an eyepiece.

Chernobrov added that the system’s AI capabilities mean that the computer provides aiming guidance and issues alerts when it detects movements, such as when someone moves across a window in a building.

“If a soldier wants to fire without being discovered, they can aim the gun around a corner and broadcast the image to their eyepiece without being exposed. The system will guide their aim,” he said.

ARCAS also notifies soldiers how many bullets are left in the magazine. A joystick is used to move the target cross across the screen, meaning that “an infantry soldier does not have to think about where to direct the rifle to hit a target 100 meters away. The ballistic correction feature will do that for him. The motion detector will alert him to the presence of an enemy,” explained Chernobrov.

Such technology is enabled through advanced image processing.

ARCAS can connect to military networks using encrypted Bluetooth or Wi-Fi. And if the battery runs out, soldiers simply continue fighting as they would normally, said Chernobrov.

“One of the central challenges was to make the system simple and light, and to avoid cognitive overload. This is for the infantry soldier that storms hilltops, not for pilots,” said Grinwald.

Other companies have begun developing applications for ARCAS as well.

Company representatives noted that Western and non-Western militaries have expressed interest in the system.