(February 17, 2022 / JNS) In a reversal of his earlier co-sponsorship of the bill, Rep. Jamaal Bowman (D-N.Y.) said that he had withdrawn his support for the bipartisan Israel Relations Normalization Act.

Bowman, the only member of “The Squad” in the U.S. House of Representatives who supported supplemental funding to replenish Iron Dome interceptor rockets and had signed on last year to the Israel Relations Normalization Act along with 329 of his colleagues, said in a letter to constituents on Tuesday that he has reconsidered his decision in light of a trip to Israel in November sponsored by the left-wing group J Street, where he met with Israeli and Palestinian leaders. In the letter, he also cited input from his constituents as part of the reason he changed his mind on the bill.

“Congressman Bowman takes the thoughts and suggestions of his constituents very seriously and values their engagement with the legislative process,” said spokesperson Marcus Frias. “He sent the letter to his constituents yesterday to inform them of his decision to withdraw his co-sponsorship and vote no on the legislation when it comes to the House floor.”

In his letter, Bowman said the separate agreements that were part of the incentive for countries to enter the Abraham Accords—such as the sale of F-35 fighter jets to the United Arab Emirates, the recognition of Western Sahara as part of Morocco and the isolation of Palestinians—were not conducive to peace in the region and were the reasons for his withdrawal of support for the bill.

Introduced by Rep. Brad Schneider (D-Ill.), the Israel Relations Normalization Act seeks to promote and expand the Abraham Accords, which were negotiated and agreed to under former President Donald Trump.

Bowman, who defeated the staunch Israel supporter Rep. Eliot Engel (D-N.Y.) in the 2020 primary for New York’s 16 Congressional District, which has a substantial Jewish population, was criticized recently by the Democratic Socialists of America (DSA) for his trip to Israel with J Street and support for the Iron Dome. The organization also criticized Bowman for not openly supporting the BDS movement against Israel.

Bowman’s district for the 2022 midterm elections has lost parts of its Jewish community following redistricting.

In December, the DSA’s National Political Committee considered whether or not to expel Bowman from the DSA, of which he is a member, but instead decided to not endorse his candidacy. 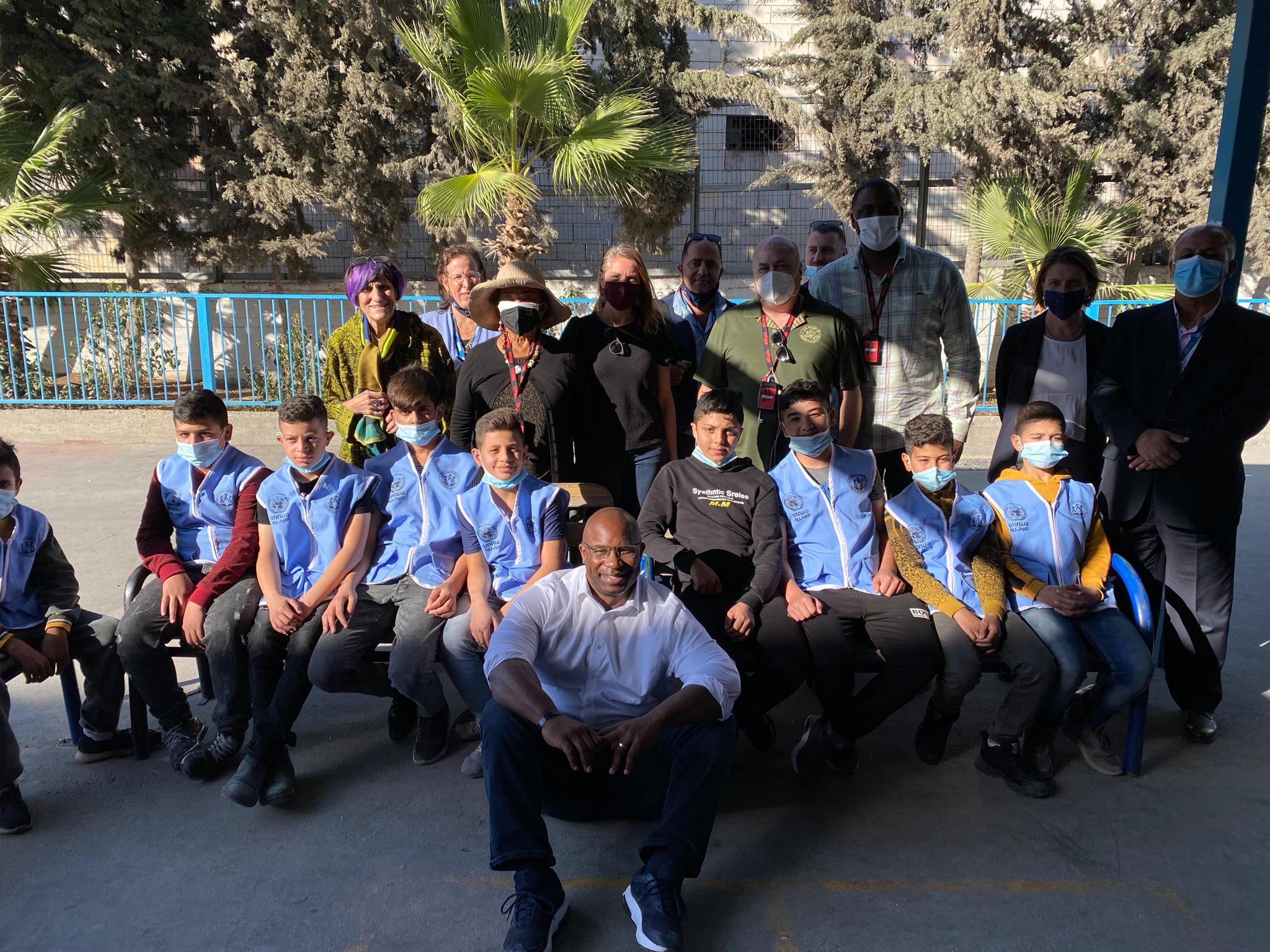 At center-front: Rep. Jamaal Bowman (D-N.Y.), along with other members of U.S. Congress, meet with Palestinian children in Hebron as part of a delegation organized by J Street, Nov. 10, 2021. Source: Jamaal Bowman/Twitter.

‘It’s not about principle’

According to former New York State Assemblyman Dov Hikind, a Democrat, Bowman may have also been threatened by a primary challenge from the left leading to his decision.

“It’s really about the politics for him personally with the [Democratic] Socialists of America not supporting him, being concerned about a race he would have from the left,” said Hikind. “That’s really what it’s about; it’s not about principle. I mean he could dress it up any way he wants, he can come up with the excuses.”

He continued, noting that the Abraham Accords “go further than things like the peace with Jordan or the peace with Egypt. There is a real relationship between these countries—people are visiting, economic relations. It’s really what peace should be all about. Two countries getting to know each other, developing relations on every single level. … So where is Bowman living on? The moon?”

Hikind called Bowman’s decision “pathetic” since Bowman could have voiced areas where he disagrees with parts of the bill while still backing it.

“The fact is that this is an amazing thing that happened that actually—Donald Trump and others, they should win the Nobel Prize the next time around,” said Hikind. “Whatever you think of anybody, this is a huge development, a huge positive thing, which by the way [U.S.] President [Joe] Biden recognizes.”

“You want to make it better? You want to make it more effective? OK, fine. But to say I’m withdrawing my support is so pathetic. It’s embarrassing that this is a member of Congress talking this way,” he added. “I would have much more respect for him if he just said, ‘Look, I need to do this for my political future.’ I would say, ‘OK.’ But to sell it to the public that it’s about principle is so dishonest.”

Pro-Israel organizations from across the country were critical of Bowman’s decision.

“Disturbing to see [Bowman] oppose peace deals. The Abraham Accords knocked down barriers between millions, fueling dialogue, trade and progress. There is nothing progressive about opposing this tectonic shift toward openness and peace. Stand for peace, not more division,” AIPAC tweeted on Wednesday.

Bowman’s record in Congress on Israel has been lukewarm. While originally supporting the bill and Iron Dome, he also co-sponsored Rep. Betty McCollum’s bill last year that puts conditions on aid to Israel and supported a resolution during the Israeli conflict with Hamas last May to block $735 million in arms sales to the Jewish state.

‘A genuine thirst for normal interaction’

“Whatever Congressman Bowman’s political calculation was in doing a 180, he actually just hurt the cause of peace and reconciliation and the cause of the Palestinians by further empowering terrorist Hamas and the Palestinian Authority, which continues its pay-to-slay Jews policy,” said Rabbi Abraham Cooper, associate dean and director of global social action at the Simon Wiesenthal Center, in a news release.

“For decades, leaders and pundits insisted that peace in the Middle East would not come unless and until the Israel-Palestinian conflict was settled,” he said. “But [our] decade-long outreach in the Gulf region debunked that myth years before the Abraham Accords were signed. We found that Emiratis and Bahrainis were eager to establish contacts and meaningful relationships—that there was a genuine thirst for normal interaction and for building a future that’s not based on violence and hate. We all see the fruits of true peace-seekers.”

Cooper asked whether Bowman was truly committed to the DSA’s platform of BDS, resisting normalization and eliminating all U.S. military aid to Israel. He recommended that the congressman call the neighboring congressional district’s Rep. Ritchie Torres (D-N.Y.) for guidance on “how to maintain progressive credentials and move forward as a positive force for peace.”

Despite the change of mind, Bowman was still endorsed for re-election on Wednesday by Jewish Sen. Chuck Schumer (D-N.Y.), who is also running to keep his seat.

“I am very pleased to endorse my friend and partner, Rep. Jamaal Bowman, for reelection in the 16th Congressional District in the Bronx, Westchester and Putnam. He is smart, hardworking, passionate and extremely effective,” said Schumer, according to News 12 The Bronx.

Jeff Mendelsohn, executive director of Pro-Israel America, tweeted that “by pulling his support for the Abraham Accords, Rep. Bowman makes clear that he isn’t interested in peace. He’s only interested in placating the anti-Israel Socialist party that’s supporting him.”

“The Abraham Accords have enhanced critical economic, security and intelligence ties between countries that just a few years ago didn’t even acknowledge Israel’s right to exist,” wrote Mendelsohn. “Recognizing Israel’s right to exist is the only path towards mutual peace and prosperity in the Middle East, and instead, Rep. Bowman is turning his back to the historic progress being made between Israel and Arab states.”