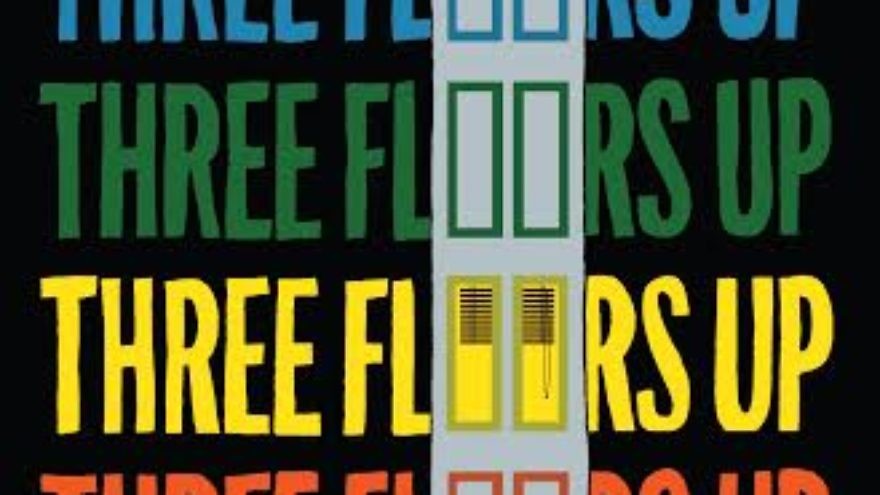 “A wonderful fact to reflect upon…when I enter a great city by night, that every one of those darkly clustered houses encloses its own secret,” Charles Dickens muses in the 19th-century classic, “A Tale of Two Cities.” The same contemplative voyeurism inspires Israeli author Eshkol Nevo’s popular novel, “Three Floors Up,” which becomes available in English this October.

Behind the cold, steel-reinforced doors that separate the living spaces in an Israeli apartment high-rise, three loosely connected, first-person confessional narratives unfold. Collectively, the novella-length chapters offer a compelling critique of Israeli society. But Nevo’s chief strength lies in his ability to fashion wonderfully relatable characters whose troubled voices, as well as mysterious and impulsive moods, render the work a page-turner.

Arnon is a retired army officer living with his wife Ayelet and daughter Ofri. Despite clear warnings that their neighbor, Herman, an elderly German man, is either showing signs of dementia or playing devious, perhaps pedophilia-inspired games with Ofri, Arnon carelessly leaves his daughter with Herman one afternoon to avoid being late to his spinning class. Ensuing events throw his entire marriage into crisis and lead him to confide in an old friend.

“Remember when the concrete blocks started raining down on us? And that moron couldn’t put the vehicle in reverse?” Arnon says, reflecting on his experience as a soldier during the Palestinian intifada, upon registering the magnitude of his compounding fear and self-loathing when he first received word that his daughter was missing. “Take that and multiply it by 10. By a hundred. A thousand. In Hebron, I was pretty calm. I had a feeling we’d get out in one piece.” The scene rattles readers in part because they fear for little Ofri, but also because Nevo has vividly depicted the post-traumatic stress that underlies the Israeli experience.

The improperly nicknamed “widow,” who Arnon and Ayelet observe while watching the street below, turns out to be Hani. Married and the mother of two, Hani has penned an emotional letter to her friend in America, detailing her dissatisfaction and growing resentment for her aloof, though financially successful husband. Her account takes an unexpected turn when her fugitive brother-in-law, Eviatar, appears at her door. Having embezzled a fortune, Eviatar seeks refuge from loan sharks and the police.

Hani resolves to help, if only to spark new passion in her life. “Without Enrique the Argentinian volunteer, there was a better than likely chance I would have gone into the army a virgin,” Hani says, prompted by Eviatar’s presence to reflect on previous sexual experiences, including relationships she had with a psychologist as well as an Orthodox man.

Nevo’s prose details Israelis’ unique exposure to different sects within their society, presenting a portal for English-language readers to discover the richness of Israeli culture and the way different groups and transient visitors can affect individual identities.

Devora, a retired judge, leaves a parting phone message for her late husband on the old answering machine she discovers while cleaning out his study. Mulling the unfortunate events that left her estranged from her son, Adar, while her husband was still alive, Devora describes a bizarre journey to Tel Aviv to participate in a protest. There, she encounters Avner Ashdot, a charming older man with a secretive past. Avner cleverly convinces Devora to join him on a revelatory trip south, where (SPOILER ALERT) she discovers she is in fact a grandmother.

Readers may find this sequence slightly too reliant on coincidence to advance the plot, and the character development somewhat predictable. But Nevo has noticeably switched gears, embracing a philosophical tangent as he contemplates the nature of fate as a means to connect the novel. Fittingly, Devora offers a resounding verdict justifying the majority of human behavior: “There is no such thing as a normal person. Or normal actions. There are only actions that a particular person, at a particular time must do.” This is the mark of an author who understands that essential character faults in fiction—as in life—are actually the source of human liberty, informing our ability to seize the day and abruptly change course.

Excessive details are at times disruptive. The gun that Arnon points at Herman’s head is an exaggerated prop and gesture, especially when Nevo neglects to render any legal consequences for such brash behavior. Likewise, the recurring congenital defect (six toes) that Devora observes on her daughter-in-law’s foot—and then again on her grandchild—is unnecessary, if not a stretch to imagine.

Yet none of these distractions will slow down the reader. On the contrary, Nevo’s talent for embedding telling character traits and cultural anecdotes through quick one-liners is perhaps his greatest asset. The prose sings in places, and “Three Floors Up” is difficult to put down.