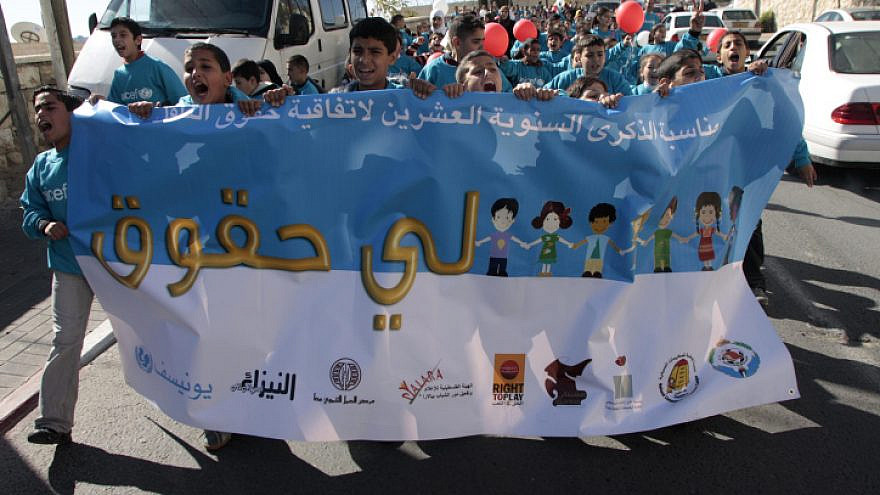 Palestinian children cheer during an event organized by UNICEF to celebrate the 20th anniversary of the Convention on the Rights of the Child, in eastern Jerusalem. 2009. Credit: Mohamar Awad/Flash90.
Republish this article
912 WORDS
Spread the word.
Help JNS grow!
Share now:

(February 18, 2021 / Israel Hayom) Palestinian and international NGOs, funded by European governments and working in tandem with the United Nations International Children’s Emergency Fund (UNICEF), have launched a campaign seeking to trigger U.N. sanctions against the Jewish state, according to a report published on Thursday by NGO Monitor.

According to the Israel-based watchdog group, UNICEF’s Gaza and West Bank branch has “built an extensive campaign, using false charges of abuse of Palestinian children in the effort to trigger sanctions against Israel.”

“A core goal is to have the IDF included on a list of child rights abusers, published annually by the U.N. Secretary-General as an annex to the report on Children and Armed Conflict,” the report states. It warns that such claims can then be used to lobby the International Criminal Court to prosecute Israelis.

In January 2018, NGO Monitor published “UNICEF and its NGO Working Group: Failing Children,” detailing joint NGO-U.N. efforts to demonize Israel and blacklist the IDF. The watchdog noted that several of the NGOs in this “working group” promote BDS, and a number of members are closely linked to the Popular Front for the Liberation of Palestine—designated as a terrorist organization by the United States, European Union, Canada and Israel.

Since then, these NGOs have continued their efforts under U.N. auspices and buoyed by substantial financial and project support from the European Union and European countries. The report states that UNICEF sought $3.35 million to fund its activities on the matter between 2018 and 2022. The funds were earmarked to engage “human rights mechanisms … to hold Israel accountable for its obligations under international law”—a reference to pushing for sanctions against Israel.

These activities include “documenting and reporting on grave violations of child rights; building capacity of the government and civil society on data collection, reporting, analysis and advocacy related to rights and violations; and increasing the number of national, civil society and other organizations actively monitoring, advocating and mobilizing on human rights violations,” according to the report.

Since 2018, the European Union has provided at least €3.2 million to projects that further the campaign, alongside at least $6.7 million from other European countries and U.N. frameworks, the report claims, adding that NGOs which receive this funding continue to accuse Israel of violations against Palestinian children, often inventing legal doctrines and standards in order to do so. NGO grantees also engage in advocacy and lobbying, targeting the U.S. Congress, U.N. bodies and other international actors, and a variety of European institutions. Many of the grants—from individual European countries such as the United Kingdom, Norway and Belgium—include explicit advocacy benchmarks.

NGO Monitor has produced detailed research reports documenting the baseless charges made in publications related to the so-called “children campaign.”

These groups often “base their allegations on invented standards, distortions of international law, unreliable sources collected by terror-linked and BDS-supporting actors, [and] they reflect a lack of familiarity with actual Israeli practice,” said the organization. “Moreover, NGOs routinely ignore the context of Palestinian incitement and the involvement of Palestinian minors in violence against Israelis, as well as the recruitment and use of children by Palestinian terrorist organizations.”

The report further notes that UNICEF “no longer publishes the names of the NGOs on its Working Group—reflecting a lack of transparency and accountability.” What is known however is that the Working Group does not include an official Israeli representative or Israeli experts on the needs of children. No Palestinian child experts are involved, either.

“These and other NGOs create a political echo chamber by writing their own reports alleging Israeli violations of child rights and often citing each other. These reports are anecdotal and do not appear to adhere to human rights fact-finding standards. They also rely on invented legal definitions in order to paint Israeli action in a harsher light,” said NGO Monitor.

The study urges the European Union and individual donor states to “immediately cease all funding to organizations with ties to the PFLP or that engage in BDS and other anti-Israel political activities,” and to “address any evidence-based concerns over Israeli policy through direct diplomacy with the Israeli government, not by funding political NGO grantees to lobby international bodies and foreign governments.”

The E.U. Delegation in Israel issued a statement saying, “The E.U. is neither aware of nor takes part in any campaign aiming at adding an Israeli or Palestinian entity to the annex of the U.N. annual report on children and armed conflict.

“Promotion and protection of the rights of the child is a priority of the E.U.’s human rights policy. The E.U. considers it of critical importance to address the issue of protection of children because children enjoy inalienable rights, as set out in the universally applicable U.N. Convention on the Rights of the Child, its Optional Protocols and other international and regional human rights instruments.”

The European Union, the statement continued, “Will continue to support civil society organizations which play an indispensable role in any democratic society, in fostering pluralism and democratic values as well as in promoting good governance, human rights and rule of law, both in the E.U. and across the world.”