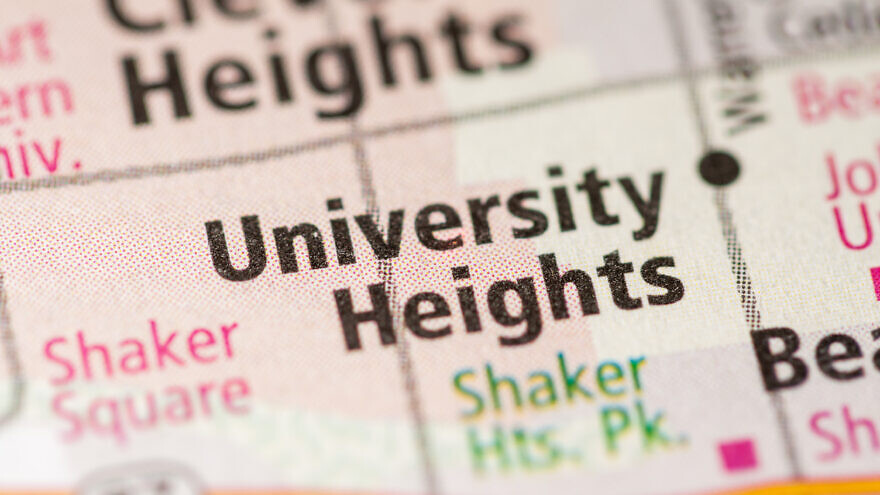 (October 7, 2021 / Cleveland Jewish News) Someone in a vehicle reportedly threw a beer bottle at a 13-year-old Fuchs Mizrachi School student in an Orthodox neighborhood in University Heights, Ohio, and screamed, “F******g Jews, you’re f*****g idiots, Jews,” and then drove away.

Naava Prero had just gotten off a public school bus at the corner of Milton and Groveland roads at about 5:30 p.m. on Tuesday when the reported incident took place.

As the bus pulled away, another vehicle pulled up to the girl, her mother, Rachel Prero, told the Cleveland Jewish News on Oct. 6. Naava was wearing a Fuchs Mizrachi school uniform, which is a short-sleeve blue polo shirt and pleated skirt. A woman, described as white, middle-aged and wearing a baseball cap, threw the bottle and yelled the profanities, said Prero.

Naava ran home too upset, according to the mother, to get details such as the license plate number of the vehicle, which was described as large and dark.

“She was very shaken up, and she’s OK because, you know, the bottle missed her,” said Prero. “But she told me that she really appreciated that I didn’t just say, ‘these things happen,’ but rather … let’s take action.”

She added that one of the first questions her daughter asked was how the person knew she was Jewish.

Prero said that she and her husband were both targeted verbally as Jews years ago and did not report it, and weighed whether to do so now.

“The perpetrators need to know we’re going to take a stand. We’re not just going to allow this to happen,” she said, adding that she felt strongly about protecting her child and that the physical component of the incident was of concern.

Prero said a neighbor with an exterior security camera might have captured footage of the vehicle, which then reportedly turned on Churchill Boulevard.

She said she then texted stopantisemitism.org, which blasted out the information in a tweet and on social media. She said the person who answered her at antisemitism.org encouraged her to make a police report in person.

University Heights (Cleveland) – ring camera has captured this photo from the attack.

Neighbors on Churchill are being asked to check any security footage they may have that captured the license plate at 4:56/4:57pm EDT on October 6th 2021.

University Heights police contacted Rachel Prero the morning of Oct. 6 and an officer stopped at her house to take a report.

“He did tell me there have been other incidents lately,” she said. “And I said, ‘I even know of incidents that weren’t even reported.’ ”

Prero said she asked police to publicize the incident “just to let people know … that they are investigating these reports so that people won’t feel so brazen to be able to … throw glass bottles at kids.”

Police released a news release about the incident to the Cleveland Jewish News on Oct. 6.

“Officers are actively and vigorously investigating this reported crime, and are attempting to locate any further witnesses or video evidence that could assist in the process,” the release stated. “Collaboration is also occurring with various levels of regional law enforcement, with civilian resources and with the community.”

The statement also said: “The University Heights Police Department condemns anti-Semitism and acts of ethnic intimidation. We will remain diligent in our zero-tolerance efforts to prevent, investigate, and apprehend those who commit such cowardly and hateful acts.”

James Pasch, regional director of the Anti-Defamation League, told the newspaper that he learned of the incident through a third party.

“We have reached out to local law enforcement to offer to assist in any way possible,” said Pasch on Wednesday, adding that he had not yet contacted the Prero family.

“It is an act in a string of incidents that lead to growing concern,” he said. “I can’t stress the need enough that if individuals see something that doesn’t seem right to please report it. Report it to local law enforcement, report it to our ADL office, report it to the Jewish Federation of Cleveland. We are all here to work on behalf of the community.”

Anyone with information regarding the incident is asked to call the University Heights police detective bureau at 216-932-8799.