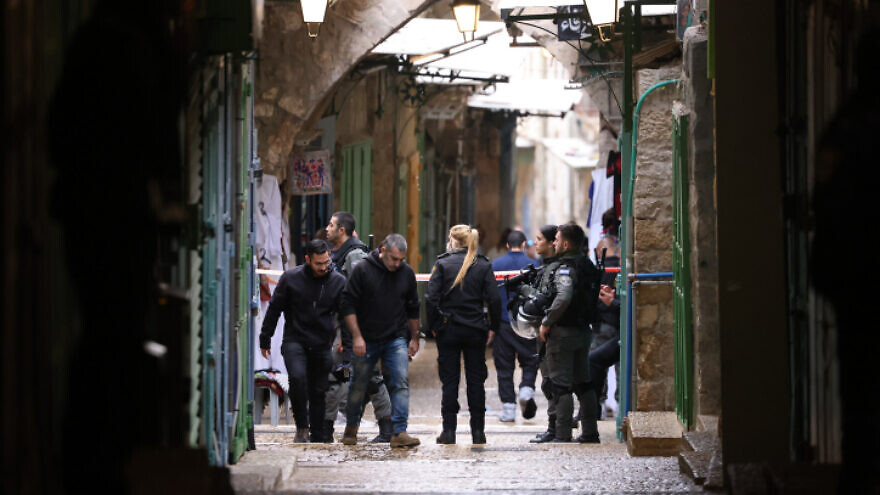 (November 21, 2021 / JNS) One person was killed and four wounded in a terrorist attack in Jerusalem’s Old City on Sunday morning, according to Israeli media reports. The assailant was killed by police officers on the scene.

According to police, at about 9 a.m., a man later identified as  Fadi Abu Shkhaydam opened fire near the Temple Mount’s Chain Gate with a submachine gun, wounding three passersby. Border Police responding to the attack shot and killed the assailant, two of them suffering light wounds in the brief gun battle. According to Kan news, the terrorist was also carrying a knife.

According to Israeli media reports, Abu Shkhaydam, a resident of Shuafat, is a known member of Hamas.

The Jerusalem District Police commander was conducting a situation assessment at the scene on Sunday morning, and large police forces were operating in the area. The Old City and Temple Mount were closed to visitors, according to Channel 12. Police have ruled out the possibility that the shooter had accomplices, according to the report.

Magen David Adom’s Jerusalem dispatch center received an initial report on the shooting at 9:01 a.m., according to the emergency service. First responders provided medical treatment at the scene before evacuating the victims to Jerusalem’s Hadassah Ein Kerem Hospital. One of the victims died approximately an hour after the incident, reported Channel 12.

On Nov. 17, two Border Police officers were wounded in another terror attack in the Old City. The officers were patrolling near the Ateret Cohanim yeshivah at approximately 6 p.m. when they were attacked by a man wielding a knife, police reported. The assailant was neutralized by the officers and a civilian security guard at the scene.

Correction: This article initially stated that three people had been wounded in the attack.