(July 15, 2021 / Jerusalem Center for Public Affairs) U.S. Secretary of State Antony Blinken met in Ramallah with PLO leader Mahmoud Abbas on May 25 as part of a series of measures intended to “engage with and provide support for the Palestinian people.” Blinken announced the intention of the U.S. administration to reopen the former U.S. Consulate-General in Jerusalem.

The former consulate had served as a quasi-diplomatic mission to the Palestinian leadership and served Palestinian residents of eastern Jerusalem, the West Bank areas of Judea and Samaria, and the Gaza Strip. The consulate was merged in 2019 with the new U.S. embassy, which opened in Jerusalem following the U.S. recognition of Jerusalem as Israel’s capital.

The Secretary of State’s declared intention to reopen the former consulate-general raises complex legal and political questions that require due consideration.

The U.S. consular mission in Jerusalem was originally established with the encouragement of American Christian Zionists in 1844 when Jerusalem was still part of the Ottoman Empire. Its function was to provide “humanitarian and legal assistance to Americans in the Holy Land and to protect minorities against discriminatory Ottoman practices.” The American consulate afforded consular services to Christian missionaries and Jews in the Holy Land. 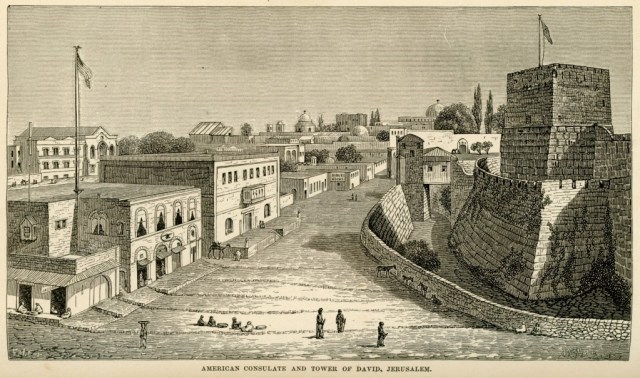 An illustration of the American consulate on the left, inside Jaffa Gate in Jerusalem’s Old City. (Circa 1857)

With the impending termination of the British mandate over Palestine in 1947, the U.S. Truman administration supported a “Partition Plan” recommended by the U.N. General Assembly in its Nov. 29, 1947 resolution 181(III), titled “Future Government of Palestine,” as a means of internationalizing Jerusalem. The plan recommended the establishment of two states, an Arab and Jewish state, with a separate international status for Jerusalem.

While this recommendation was accepted by Israel, whose statehood was declared in May 1948, Israel’s neighboring Arab states rejected it and proceeded to invade Israel in what became known as Israel’s War of Independence.

During the course of this war, east and west Jerusalem came under the control of Jordanian and Israeli forces, respectively. Israel subsequently declared Jerusalem to be Israel’s “eternal and only capital,” and moved its seat of government there from Tel Aviv in 1950.

While the United States and other countries formally recognized Israel as a sovereign state, they refrained from recognizing Israel’s sovereignty over any part of Jerusalem, pursuant to their policy of supporting the idea of internationalizing the city. They chose to locate their embassies in Tel Aviv, and some states chose to maintain their historic Jerusalem consulates as separate consular missions to deal with residents of Jerusalem and Palestinians.

In this context, the U.S. Jerusalem consulate remained completely independent of the U.S. Israel embassy, reporting directly to the U.S. State Department as if it was representative to another political entity. 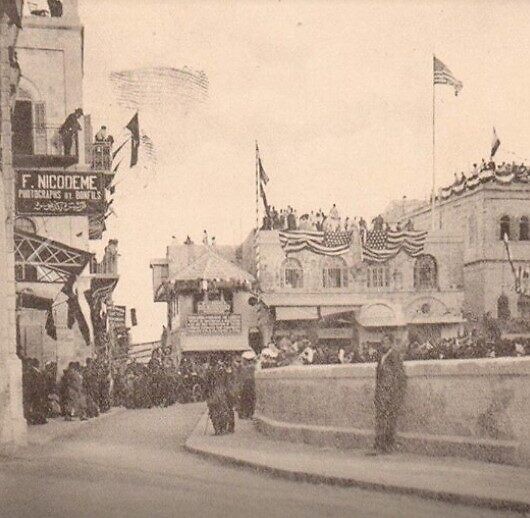 The U.S. Consulate staff in the Old City of Jerusalem decorates the building prior to the visit of German Kaiser Wilhelm in 1898.

With Israel’s reunification of Jerusalem and extension of Israel’s laws to eastern Jerusalem following the 1967 Six-Day War, the United States, in several U.N. declarations and other statements, maintained its refusal to recognize Israel’s sovereignty over any part of Jerusalem—east or west—preferring to await a negotiated solution to the issue of Jerusalem.

This position remained consistent for various U.S. administrations during the course of peace process negotiations between Israel and its neighbors, including the Palestinians, both following the 1978 Camp David Accords and the 1993-5 Oslo Accords.

In the 1993-9 Oslo Accords and their related documents, Israel and the PLO, with the active support of the Clinton administration, agreed that the issue of Jerusalem would be part of the negotiation on the permanent status of the territories.

U.S. consular and political relationship with the Palestinian Authority

In light of the creation by the Accords of the Palestinian Authority as an autonomous administration with powers and responsibilities in parts of the territories, and despite the fact that the Oslo Accords did not provide for any Palestinian functions in Jerusalem, the independent and separate U.S. consulate in Jerusalem developed a new role of overseeing U.S. relations with this Palestinian political entity as well as with Palestinian residents of eastern Jerusalem, the West Bank areas of Judea and Samaria, and the Gaza Strip.

The U.S. Jerusalem consulate thereby became the de facto representative of the United States vis-à-vis the P.A. and Palestinian residents of eastern Jerusalem and the territories, and its staff became a central channel of communication with Palestinian officials.

Given the solid historical relationship between Israel and the United States, the principled and long-maintained official U.S. policy of non-recognition of Israel’s sovereignty and legal status over any part of Jerusalem, and the ongoing and active functioning of the consulate as the de-facto U.S. representation to the Palestinians, Israel was, to all intents and purposes, stopped from demanding any formal or legal change in the situation.

To the contrary, Israel had no choice but to permit this situation to continue. Israel’s foreign ministry even granted the consulate and its staff, on a de facto and pragmatic basis, symbolic consular privileges and immunities.

However, this legal and factual situation of non-recognition ended with the formal U.S. declaration by President Trump recognizing Jerusalem as the capital of Israel and the relocation of the U.S. Embassy from Tel Aviv to Jerusalem.

In his Dec. 6, 2017, official declaration, President Donald Trump proclaimed Jerusalem to be the capital of Israel and instructed the State Department to relocate the U.S. embassy from Tel Aviv to Jerusalem.

In so doing, he recognized that the specific boundaries of Israeli sovereignty in Jerusalem are subject to final status negotiations between the parties. Trump declared:

“This decision is not intended, in any way, to reflect a departure from our strong commitment to facilitate a lasting peace agreement. We want an agreement that is a great deal for the Israelis and a great deal for the Palestinians. We are not taking a position on any final status issues, including the specific boundaries of the Israeli sovereignty in Jerusalem, or the resolution of contested borders. Those questions are up to the parties involved.”

With the opening of the new embassy in Jerusalem on May 14, 2018, the functions of the old consulate vis-à-vis Palestinian residents of Jerusalem and the area were combined within the newly located U.S. Embassy in Jerusalem under a new “Palestinian Affairs Unit” formed under the larger umbrella of U.S. relations to Israel.

Implications of U.S. recognition of Israel’s sovereignty in Jerusalem

Formal American recognition of Israel’s sovereignty in Jerusalem established a new bilateral legal situation that replaced the former policy of non-recognition, whereby the United States acknowledged the application of Israel law in Jerusalem.

As such, a mutually accepted consular relationship between Israel and the United States is based on the 1963 Vienna Convention of Consular Relations to which both Israel and the United States are parties. Article 4 determines that consular posts, or any other offices forming part of a consular post, may only be established in the territory of the receiving state with that state’s consent. Similarly, articles 7 and 8 of the convention require that the exercise of consular functions vis-à-vis or on behalf of another state requires specific approval.

Clearly, reopening the former consulate in Jerusalem, the jurisdiction of which would be intended to cover relations with the Palestinian leadership, Palestinian governmental bodies, and Palestinian residents of the territories, none of which are subject to Israel’s sovereignty, would be politically and legally problematic in light of the new situation since 2017 of formal acceptance by the United States of Israel’s sovereignty in Jerusalem and the application of Israeli law in the city.

A document entitled “The U.S.-Palestinian Reset and the Path Forward,” prepared for the incoming Biden administration under the direction of Deputy Assistant Secretary of State for Near Eastern Affairs Hady Amr and published by The National newspaper of the United Arab Emirates on March 17 sets out proposals for a new approach to relations with the Palestinians. It raises the “idea of reopening a U.S. mission in the Palestinian territories to signal a commitment to the two-state solution.”

Such a proposition by Amr to open a U.S. mission in the territories would indeed appear to be compatible with the provisions of the 1995 Israel-PLO Interim Agreement, witnessed and endorsed by President Bill Clinton together with other world leaders (commonly termed “Oslo 2”).

Article IX, paragraph 5(c) of the agreement provides for the establishment of “representative offices” by foreign states in the area under the authority of the P.A., as a means of furthering economic, cultural, and implementation and other agreements, for the benefit of the Palestinian Authority.

The opening by the United States of such a representative office in Ramallah, or anywhere else in the territories under Palestinian governance, would be in accordance with the agreed peace process documentation agreed to by Israel and the Palestinians and supported by the United States, and would not require Israel’s consent, inasmuch as Israeli law is not applied in those areas.

For an American view of opening an American diplomatic office in Jerusalem or the West Bank territories, see “Reopening US consulate for Palestinians in J’lem ‘violates Israeli, US law’ ” by former U.S. Ambassador to Israel David Friedman.

Alan Baker is director of the Institute for Contemporary Affairs at the Jerusalem Center and the head of the Global Law Forum. He participated in the negotiation and drafting of the Oslo Accords with the Palestinians, as well as agreements and peace treaties with Egypt, Jordan and Lebanon. He served as legal adviser and deputy director-general of Israel’s Foreign Ministry and as Israel’s ambassador to Canada.