Being signatories as witnesses to the 1991-93 Oslo Accords between Israel and the PLO, together with the United States, Russia, Norway and Egypt, the European Union took upon itself a responsibility to encourage the parties to observe the obligations and commitments contained in the Accords and ensure that they would be duly honored by the parties.

By the same logic, one would expect that those witnesses, all highly involved and active stakeholders in the Middle East peace process, would meticulously ensure that they themselves honored the agreements and refrained from any action that could undermine or frustrate them. That they would seek to assist the parties to fulfill their respective commitments pursuant to the Accords, and not encourage one of the parties to violate those commitments.

This is the obvious responsibility of a witness to such a vital international instrument. Otherwise, why would the European Union or any of the other witnesses have signed the Accords?

Regrettably, however, the European Union is assisting the Palestinian leadership to violate the Oslo Accords by encouraging and financing unauthorized development projects and building in that part of Judea and Samaria under the control and jurisdiction of Israel.

The governance of Area C

In the 1993-95 Oslo II Accords, the PLO and Israel agreed to divide the governance of the territories pending the outcome of negotiations on their permanent status. They agreed that the parts of the territory heavily populated by Palestinians—denominated as Areas A and B—would be under the jurisdiction and control of a “Palestinian Authority” established by the parties for that purpose. They also agreed that the remaining parts of the territory, containing Israeli population centers and military installations—denominated as Area C—would be under the exclusive military and civilian control and jurisdiction of Israel. 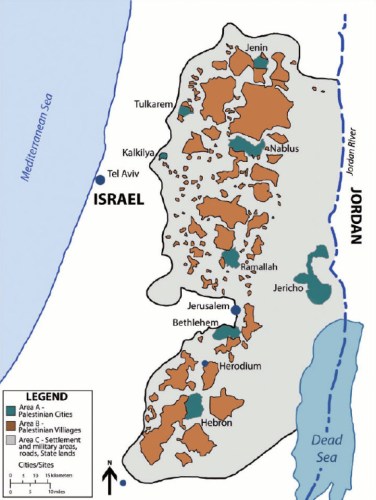 The Oslo Accords Map of the West Bank, 1995 (Area C is in gray). Source: Center for Israel Education.

They agreed that in their respective areas of control and jurisdiction, each party would legislate and govern according to its own procedures, laws, regulations and orders, including the areas of planning, zoning, and construction.1

Accordingly, E.U. projects dedicated to the development, agricultural and other forms of assistance intended to contribute to “Area C and Palestinian state-building,” and the 2021 Oxfam initiative financed and sponsored by the European Union—“Promotion of Inclusive Agricultural Growth to Ensure Improved Living Standards and Resilience of Vulnerable Communities in Area C of the West Bank”2 —can only be pursued with the agreement of and in coordination with the Israeli Civil Administration, which, pending any further agreement between the parties, is the agreed-upon governing authority in Area C.

By the same token, E.U. initiatives for roads, water and infrastructure, municipal, educational and medical projects in the area must be coordinated with Israel.

In light of the responsibilities of the European Union as a witness to the Oslo Accords, any official directive by the European Union to mobilize and activate “national and international stakeholders through ad-hoc influencing actions on land rights to challenge the Israeli planning and permit regime in Area C” (emphasis added) clearly and openly seeks to undermine and violate the agreed-upon responsibilities and jurisdiction by Israel in Area C.3

If the European Union entertains genuine concerns about Israel’s planning and permit policies in the area, or about the manner in which Israel governs the area, including Israel’s policies with regard to building Israeli communities, it has the prerogative, as a witness to the Accords, to raise such concerns with Israel and to express its views. However, deliberately encouraging the Palestinians to defy and undermine Israel’s authority in Area C runs counter to the spirit and letter of the Accords and violates the European Union’s status as a witness.

Official E.U. policy, as first set out in policy papers dated April 2013 issued by the E.U. Directorate-General for External Policies4, determines that “Area C is part of the occupied Palestinian territory and part of any viable future Palestinian state. All EU activity in the West Bank is fully in line with international law.”5

Here again, the European Union is at variance with its obligations as a witness to the Oslo Accords.

By determining that the territory, or any part thereof, is “occupied Palestinian territory,” the European Union is prejudging the outcome of the agreed negotiation process between Israel and the PLO set out in the Accords on the issue of the territory’s permanent status. The final disposition of the territories, including whether there will be one, two, or three states, or a federation or confederation, will be determined only through negotiation between Israel and the Palestinians.

Since the Palestinian leadership is committed to negotiating this issue, any unilateral E.U. determination regarding the status of the territory is premature and ill-advised. Such determinations indicate that the European Union has taken a partisan position on an open negotiating issue in violation of its moral commitment as a witness to the Accords.

The oft-repeated E.U. mantra regarding the “illegality” of Israeli settlements in the West Bank under international law represents a further example of Europe’s misrepresentation of the legal situation and undermining of the Oslo Accords.

The regime governing the division of governance of the territories pending the outcome of permanent-status talks, as agreed between Israel and the PLO in the 1993-5 Oslo Accords, replaced any previous legal regime acknowledged by the European or others, based on the 1949 Fourth Geneva Convention.

In the same context of the Oslo Accords, the issue of settlements was agreed upon as a permanent status negotiating issue between the Palestinians and Israel.

By repeatedly criticizing and misrepresenting Israel’s policy, the European Union is taking a partisan position on an agreed negotiating issue between the parties.

While the European Union has the prerogative to criticize and express political opinions as to Israel’s policies, its status as a witness to the Oslo Accords obligates it to maintain a bipartisan position on issues that are on the negotiating table between the parties.

The European Union cannot maintain the status of “witness” to the Oslo Accords while at the same time systematically undermining the Accords and encouraging the Palestinians to violate them.

The European Union is acting with unclean hands and must determine whether it is in a position to continue to be a stakeholder in the Middle East peace negotiations or whether it has become a partisan element undermining the negotiation process.

If such is the case, it is incumbent upon the European Union to withdraw itself from the status of witness to the Accords.

Rather than encourage the Palestinians to violate the Accords, the European Union might prefer to encourage them to return to the negotiating table.

Ambassador Alan Baker is director of the Institute for Contemporary Affairs at the Jerusalem Center and the head of the Global Law Forum. He participated in the negotiation and drafting of the Oslo Accords with the Palestinians, as well as agreements and peace treaties with Egypt, Jordan and Lebanon. He served as legal adviser and deputy director-general of Israel’s Ministry of Foreign Affairs and as Israel’s ambassador to Canada.