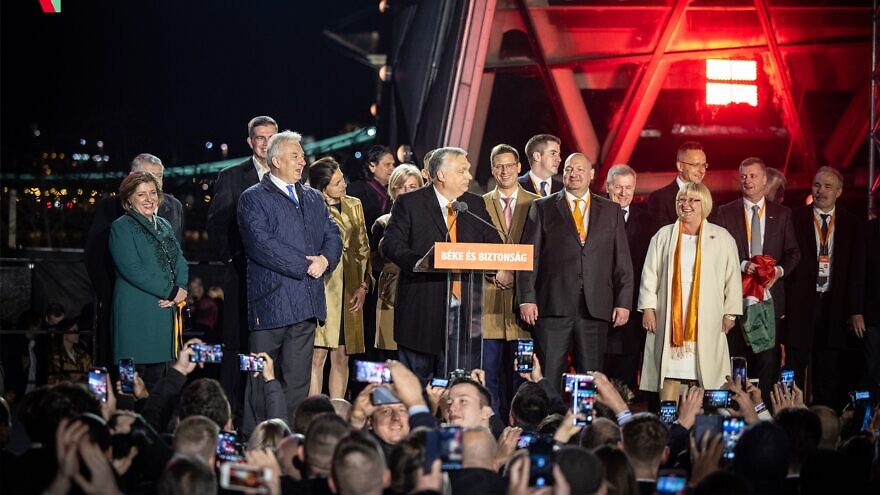 (April 4, 2022 / JNS) In an unusual Hungarian election, whereby ideologically disparate opposition parties united to attempt to prevent Prime Minister Viktor Orbán from serving his fourth consecutive term (and fifth total), the Hungarian people gave him the mandate to continue to lead the nation at a time of increasing scrutiny over its approach on the Russia-Ukraine war. Orbán and his Fidesz party won the vote by around 20 points, even gaining two parliamentary seats.

Overshadowed by the war in bordering Ukraine, the elections served as a referendum for Orbán’s national-conservative approach. While the 58-year-old has been a polarizing figure in Europe for, in part, defying E.U. mandates to accept Muslim migrants at the height of the immigration crisis in 2015, the election confirms that he reflects a generally patriotic and traditional Christian Hungarian populace.

The Jewish community has been divided over Orbán largely across religious-political lines. Organizations affiliated with the Chabad-Lubavitch movement generally taking a friendlier stance towards the self-professed pro-Israel, pro-Jewish leader, while Jewish liberals, unofficially represented by the Federation of Hungarian Jewish Communities, generally side with his would-be ousters. An estimated 100,000 Jews live in Hungary, mostly centered in and around Budapest.

Still, this election featured some gray areas that made it difficult for even a left-of-center electorate, Jews particularly, to whole-heartedly embrace an anti-Orbán coalition. The six-party “United for Hungary” included the right-wing Jobbik party, whose leaders have made anti-Semitic statements in the Hungarian parliament in the past, including a call to draw up a list of Hungarian Jews who could pose a threat to national security.

Jobbik has rebranded itself as moderate and claimed to have purged its ranks of extremists; however, some of its openly racist members simply split away to form “Our Homeland,” which, to Jewish dismay, just won seven seats.

‘The collateral damage was done’

Rabbi Shlomó Köves, the chief rabbi of the Orthodox EMIH–Association of Hungarian Jewish Communities, has been a vocal opponent of Jobbik’s legitimization. Its past bona fide anti-Semitic statements, he said, are much more worrying than the liberals’ complaints of Orbán minimizing Hungary’s role in the Holocaust in an attempt to inspire national pride.

“If I look at Hungary today, and only from a Jewish perspective, I see that [it] is one of the safest places for Jews in Europe,” he said.

The rabbi recalled how he had been afraid to wear a kippah in Budapest as a teenager, saying that Jews no longer need to fear doing so, unlike in other European capitals. “If you look at the number of anti-Semitic assaults, Hungary has one of the lowest in Europe wherever there is a large Jewish community. I see that Hungarian politics in government have shifted to be very favorable towards Israel.”

While he sees an upward trend of conservative Jewish voters, particularly among the younger generation, the current state of Jewish security in Hungary was not enough to sway old-time liberal Jews. The late Jewish Hungarian philosopher and Holocaust survivor Ágnes Heller stated in Hungarian media that cooperation with Jobbik would be justified to defeat Orbán, shocking even some left-of-center Jews.

“She was explaining how it was one of these collateral damages that you have to take to fight Orbán’s regime,” said Köves. “The problem is that the collateral damage was done now though the fight itself was not even successful.”

“Anti-Semitism is party-neutral,” said Tomáş Wagner, a Jewish journalist from Budapest. “There are only parties where it is important to openly show anti-Semitism. This is a small party called ‘Our Homeland.’ The other parties officially stand up for the Jews, but nonetheless, many of them are anti-Semitic. In my opinion, the majority of Jews in Hungary are more left-wing, especially the older ones.”

Some parallels to Israeli politics

Hungary’s election has some parallels to Israel’s political constellation, particularly between the reigns of Orbán and Benjamin Netanyahu. Both Orbán and Netanyahu were been long-serving prime ministers with a recess in-between their first two tenures. Fidesz is most closely aligned with Israel’s Likud (to the extent that party leaders abide by its national-conservative principles). Their aspiring ousters created a coalition of parties from left to right, headed by conservative leaders—with Israel’s ad hoc coalition succeeding.

The two iconic leaders met in Israel in 2017. As part of the Hungarian delegation to Israel, Köves remarked how perceptions of Orbán in Israel were split along political lines, just as they are in Europe: the left slammed Orbán as a “fascist” while the right hailed him as the leader of pro-Israel sentiment in the E.U.

In their most recent elections, the prime ministers’ personas, length of tenure and perceived corruption, rather than specific policies, were the main targets of attack.

“The topics of opposition were not mainly on the content side; instead, they focused on Fidesz and Orbán’s alleged corruption, anti-E.U. policies, and on complaints that he is damaging Hungary’s international reputation, instead of building it up,” said Martin Böhm, a researcher on Jewish issues at the conservative Mathis Corvinus Collegium Foundation.

Böhm said that Orbán’s “Hungary First” stance on immigration has largely become consensus, leaving Orbán’s relationship with Putin as the opposition’s most hopeful, last-ditch argument. Social-media sites were awash with pictures of Orbán and Putin’s handshake in 2017 and “pro-Putin” epithets. While Hungary has accepted around half a million Ukrainian refugees and supports NATO’s role in countering Russia, it has opposed an E.U.-wide energy embargo as well as a potentially confrontational weapons transport via Hungary, sparking anger from its European neighbors, including Ukrainian President Volodymyr Zelensky.

Orbán said that suddenly cutting-off Russian energy, of which it has long been dependent, would have disastrous effects on Hungary’s economy.

“I think people feel the way Orbán said,” noted Köves. “To help the refugees but not to be dragged into the war. And also, they want to have heating in their houses, which would not be possible without energy from Russia.”