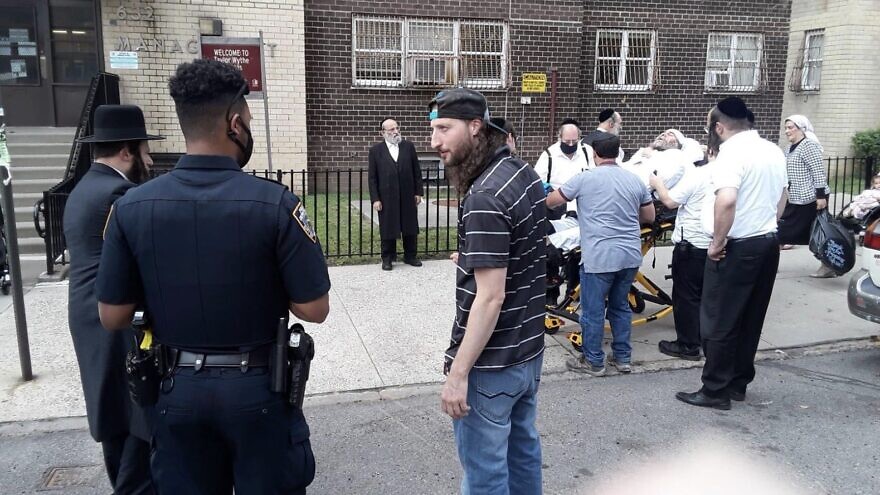 This Jewish man was attacked in the lobby of his Brooklyn building in what appears to have been an antisemitic hate crime, Aug. 21, 2020. Source: Dov Hikind/Twitter.
Spread the word.
Help JNS grow!
Share now:

(January 1, 2023 / JNS) A detailed report on antisemitic crimes in New York City is creating uncomfortable questions for elected officials and community leaders and bringing into stark relief a common misconception about the perpetrators of Jew-hatred.

Americans Against Antisemitism, through its Hate Crimes Accountability Project, pored over limited data on hate crimes against Jews from April 2018 through August of this year, adding in key details. The results show that of 194 documented assaults, the perpetrators’ group identities were known 99 times. According to the report’s data, 64% of those assaults were committed by black persons, 17% by Muslims or Arabs, 11% by Hispanics and 3% by white persons.

The data contradicts consistent refrains from city leaders about white supremacists being responsible for hate crimes against the Jewish population.

“Why doesn’t anybody want to talk about the real facts on the ground? Because it’s not politically correct,” Dov Hikind, a former New York State Assemblyman and founder of Americans Against Antisemitism, told JNS.

The issue is well-known for those following the problem closely, as video surveillance of attacks consistently shows minority perpetrators.

“How do you solve a problem if you don’t deal with the problem? If you don’t face up to the reality of where the hate is coming from, and then start asking the questions?” said Hikind. “That’s why we’re spinning our wheels, going in circles and things are getting worse and worse.”

An antisemitic hate crime every 16 hours

The figures are escalating, with the New York Police Department reporting 45 antisemitic hate crimes in the city last month, for an average of one every 16 hours. That’s a 125% increase over the same period last year. Every month except April and May this year has seen an increase over the same month in 2021.

Anti-Jewish attacks made up 60% of all hate crimes in the city in November, far more than against any other minority group.

Visibly identifiable Jews are suffering through the brunt of the assaults, according to the report released last week. Of those attacks over the last four-plus years, 52% of victims were Chasidic and 42% were non-Chasidic Orthodox, with just 4% secular, 2% modern Orthodox, 0.5% Reform and 0.5% being Israeli Jews.

Perhaps the toughest statistic in the report to swallow is that of the 194 documented assaults, the Hate Crimes Accountability Project found just two cases where a perpetrator was sentenced to prison. Most faced no consequences at all.

“Can anybody tell me why the police department and why the city administration have not done something so simple as what was done many years ago? And that is to put police officers into these neighborhoods that look Chasidish, including women police officers,” said Hikind. “What a simple thing to do to try to bring down those numbers, to try to get the perpetrators before they assault people.”

Hikind expressed anger at elected officials who talk about antisemitism but are doing little to reduce it.

“You know, [New York] Mayor [Eric) Adams just went to Athens, Greece, for an antisemitism conference. Can anybody tell me what the hell he came back with? He went to a conference to get new ideas on how to fight antisemitism. Has anyone heard anything about the ideas he came up with?” said Hikind.

Adams was the highest-profile attendee at the Mayors Summit Against Antisemitism conference. The Combat Antisemitism Movement, which helped to organize the event, asked participating mayors to appoint an envoy to address antisemitism in their cities and to adopt the International Holocaust Remembrance Alliance (IHRA) Working Definition of Antisemitism. Neither has been done yet in New York City.

Adams has called for tougher sentences for racially motivated attackers in New York and has pushed for Congress to consider the introduction of laws to compel social media companies to curb online hate, but he does not appear to have implemented any new policies within his purview.