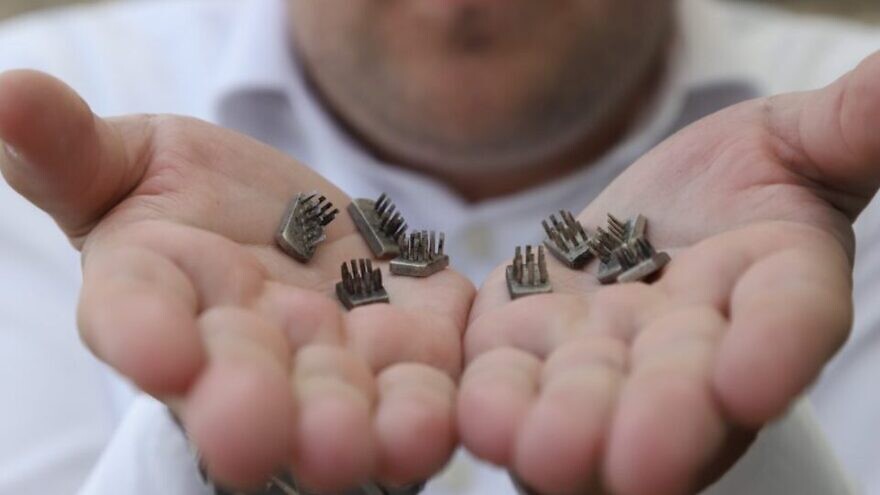 (November 18, 2021 / Israel Hayom) The anonymous owner of a tattoo kit said to have been used on prisoners in the Auschwitz death camp informed an Israeli court on Thursday that he plans to donate it to the Haifa Holocaust Museum instead of selling it.

Bidding had reached $3,400 when the auction of the eight tattoo stamps was halted by the court pending a hearing, after news of the planned sale caused an outcry. The auction house had estimated that the stamps would sell for $30,000 to $40,000. The Center of Organizations of Holocaust Survivors filed a lawsuit against the auction house and the owner in an attempt to prevent the sale of the dies altogether.

During the first hearing on Tuesday, the head of the auction house, Meir Tzolman, asked for the name of the seller to remain anonymous due to the sensitive nature of the matter. The court informed the seller’s lawyers that he had eight days to make a decision with regard to the conflict over the items, and he ultimately decided to donate them.

In a letter to the court, the seller explained that as someone who worked in the field of Holocaust history and purchased items to keep its memory alive, he had not expected the auction to cause such a storm.

The letter also stressed that the owner’s intent all along had been to sell the kits to “an individual who would then donate it to a Holocaust commemorative organization.”

The owner pointed out that “while he has no legal obligation to give away the items, he is willing to do so in light of the fact that at the end of the day, his only goal is to act for the commemoration of the Holocaust.”

He plans to donate the dies to the Yad Ezer L’Haver organization, that runs the Haifa Holocaust Museum and works with survivors.

While the decision brings the saga to an end, not everyone was satisfied with the outcome—The Center of Organizations of Holocaust Survivors wanted the items to be transferred to the Yad Vashem Holocaust Museum.

The seller has made his decision known to the court, which must now make a ruling.