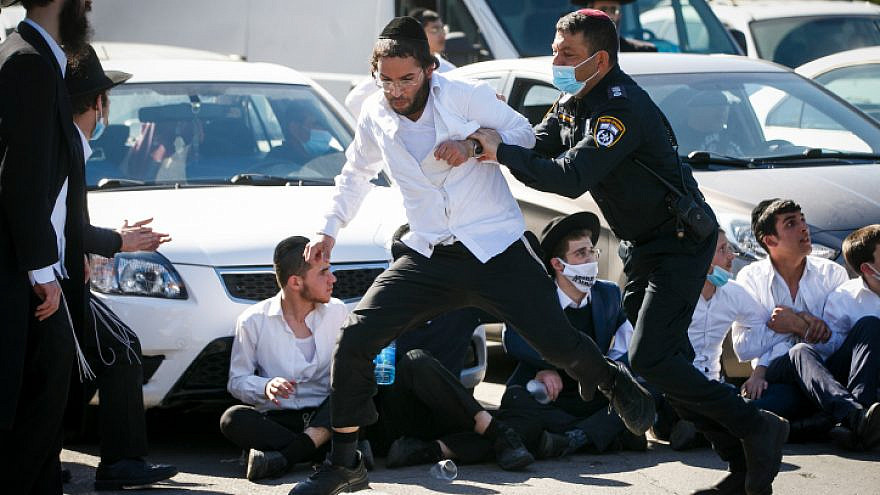 Religious students in Ashdod clash with police as they protest after authorities closed a yeshivah, on Jan. 24, 2021. Photo by Flash90.
Spread the word.
Help JNS grow!
Share now:

In Jerusalem’s Mea Shearim neighborhood, police were met by protesters when they came to shut down a yeshivah operating in defiance of a nation-wide COVID-19 shutdown.

In video footage from Israel’s public broadcaster KAN, protesters can be seen calling the police “Nazis” and throwing stones and other debris at officers.

Dramatic footage was also released from Ashdod where police arrived at an elementary school also operating in violation of the regulations.

At the school, police can be seen throwing a child to the ground.

Israel is in the midst of its third national coronavirus lockdown, which was extended last week until Jan. 31. Non-essential businesses have been shut down, as has the country’s education system, including the haredi schools. This has sparked ongoing resistance from some in the ultra-Orthodox community, despite most in the sector following leading rabbis’ calls for Health Ministry directives to be followed.

Sunday’s violence follows clashes Thursday night between police and haredi extremists which resulted in three officers being lightly injured and at least six people being arrested.

Asher also said, “There’s no hiding the sense that the police are working under pressure from the media, and instead of using sound judgment, [they are] being dragged into street fights that don’t achieve [the goal] of minimizing public gatherings, but rather the complete opposite, and that’s a shame.”

Israeli President Reuven Rivlin responded to the rising tensions regarding the enforcement of the lockdown during a meeting on Sunday at the President’s Residence with incoming Israel Police Commissioner Yaakov Shabtai.

“These are difficult days, when our police are called to perform extremely complex duties,” said Rivlin. “This is the time to ask all our police officers to be patient, tolerant and compassionate. There will be no tolerance for violence from anyone, no part of Israeli society. The right of protest is critical and immutable, but it must not be violated with violence.”

The president continued, “The police must carry out the government’s decisions and enforce them while at the same time understanding that the public is very sensitive and that decisive action is required on one hand, and tolerance and patience on the other. These are not easy times; public spirit is high, and the police are in the middle.”