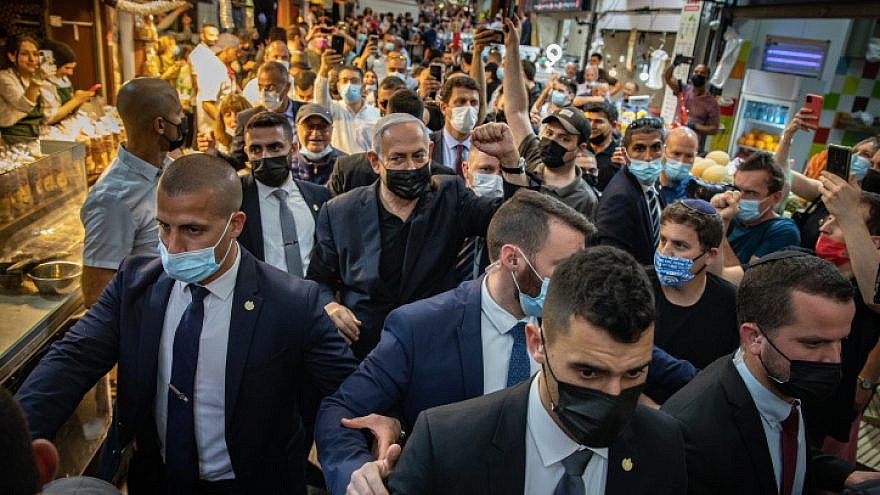 On the other hand, two Oct. 6 polls, by Ma’ariv and Channel 14, found the opposition leader cobbling together 61 and 62 seats, respectively, enough to form a government.

Two elements that may work in Netanyahu’s favor are a deteriorating security situation and the maritime border deal with Lebanon. The latter, JNS is told, was an attempt by current Prime Minister Yair Lapid to present a diplomatic achievement ahead of the election, but it may have backfired.

“The security situation is definitely part of it. When it is unsafe and not secure, Israelis tend to vote more to the right. This is the permanent issue here in Israel,” Mordechai Kedar of Bar-Ilan University and the Begin-Sadat Center for Strategic Studies (BESA) told JNS.

The Channel 11 poll found only 32 percent of respondents approved of the government’s handling of the terror wave.

“A new issue might play into the hands of Netanyahu, and that is the agreement on marking the maritime border between Israel and Lebanon,” Kedar said.

U.S.-mediated negotiations between Israel and Lebanon to reach an agreed-upon maritime border over gas-rich waters, which they both claimed lie in their exclusive economic zones, began under the Obama administration about 10 years ago. Then-Secretary of State Mike Pompeo revived them in 2020.

Lapid has touted the breakthrough as a diplomatic triumph. “This is a great achievement for the State of Israel, for Israel’s security and for Israel’s economy,” Lapid said on Wednesday as the Security Cabinet approved the principles of the agreement with Lebanon.

Netanyahu has come out against the deal, arguing it’s illegal and benefits Hezbollah by handing it “a gas field worth billions of dollars.” He promised that, if elected, his government won’t honor it.

The maritime deal has become a major campaign issue.

Those who oppose the deal, such as former U.S. Ambassador to Israel under the Trump administration David Friedman, say that Lebanon received 100 percent of its demands and Israel zero. David Schenker, former assistant secretary of state for Near East affairs, who was involved in restarting the negotiations in 2020, repeated this claim in The Wall Street Journal on Wednesday: “The contours of the proposed deal are stunning…As per the new agreement, Lebanon will attain virtually 100% of its initial negotiating position.”

Kedar also opposes the agreement. One reason he gives is that a caretaker government shouldn’t be striking such a far-reaching deal: “This is an interim government…[Lapid] is making decisions, which Israel will be stuck with forever.”

Kedar said that Lapid was motivated by a desire to attain a diplomatic triumph ahead of the election, only he made a mistake in the timing, having announced the deal too early. “If you want to impress people, you have to do it two or three days before the elections, before they understand the fraud. But he did it a month before the elections, enough time for the details to be exposed.

“When the Israelis see the whole agreement, very possibly there will be a whiplash against Lapid and he might lose much of his support. It’s not that people will vote for [Netanyahu] now. They will just stay home rather than going to vote for Lapid. But whoever stays at home actually votes for the other side. That’s how it works,” Kedar said.

It appears that skepticism about the accord has grown. An Oct. 11 poll by Channel 11 found a slight plurality, 35% to 34% opposing the agreement, a reversal from early October when a plurality, 43% to 41%, approved of it. The later survey also found a large proportion of respondents, 31%, unsure about it, up from 16%.

Michael Milstein, head of the Palestinian Studies Forum at the Moshe Dayan Center at Tel Aviv University, said polls show Lapid failed to get a hoped-for boost from the agreement.

“Most polls show seemingly equal results with a tiny advantage to Netanyahu’s camp. Seems the agreement with Lebanon has no dramatic effect since 30-40% of Israelis consider it as a negative step and not as an achievement,” Milstein told JNS.

He has argued that it’s the breakup of the Joint List, an Arab electoral alliance, which will have the most impact this election, with polls showing the Balad Party, now running independently, failing to win the 3.25 percent of votes required to enter the Knesset, which would mean votes for Balad would be discarded and which could throw two more mandates to the Netanyahu camp in Israel’s proportional representation system.

“Seems that the current elections will be dependent this time dramatically on the Arab vote. Most polls show low motivation to vote (around 40 percent and even less), which means that one of the lists, even Hadash-Ta’al [the remaining part of the Joint List], can find itself out of the Knesset and Arab citizens will have much less influence on decision-making,” Milstein said.

The Mako/Knesset Channel poll on Wednesday backs up this view with the latest numbers, showing Ra’am (the United Arab List) and Hadash-Ta’al both losing support and nearing the electoral threshold.

“If the voting percentage in the Arab sector will be low, and considering the fact that Balad also continues to move further away from [entering] the Knesset, weakening from 1.3 percent to only 0.7 percent, a situation may arise in which no Arab party will participate in the next Knesset,” according to Mako’s website.