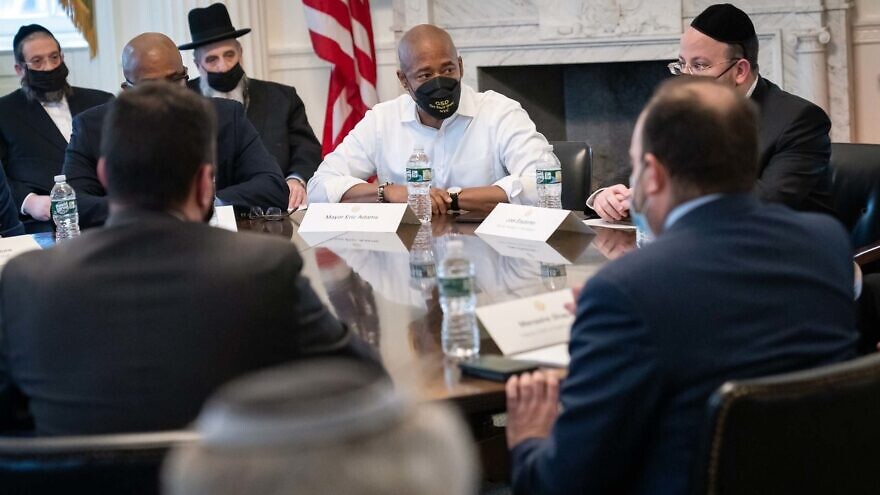 (September 22, 2022 / JNS) As the Jewish community prepares to usher in a new year, the Orthodox Union and the Secure Community Network are launching a new portal for OU members to report anti-Semitic incidents.

“There is an obvious need for increased vigilance and a more comprehensive strategic response to the growing wave of anti-Semitic acts and other acts of hate,” said Rabbi Moshe Hauer, executive vice president of the Orthodox Union. “SCN has been a trusted partner of the OU and has played a leadership role in Jewish communal security since its inception. The current initiatives that we have undertaken in partnership are tailored for the specific security needs of our synagogues and community.”

According to Michael Masters, national director and CEO of SCN, “Many members of the Orthodox community feel particularly vulnerable because they are often dressed conspicuously and gather in communal settings. That same sense of solidarity and community also puts the Orthodox community in a unique position to recognize and report suspicious or threatening activity.”

However, according to some experts, Orthodox Jews are often less likely to report the incidents—which can range from verbal threats to physical assaults or worse.

“It has become harder to motivate Orthodox community members to report incidents of anti-Semitism through the classic channels, as the events have become more commonplace and serious consequences to the perpetrators are extremely rare,” Hauer said.

That is particularly true in New York, where anti-Semitic incidents have continued to rise and yet few if any perpetrators are being held accountable. In July 2022 alone, the New York City Police Department recorded 15 hate crimes against Jews, a 114% increase from 2021.

For that reason, the OU and SCN are rolling out the “Hated? State It.” campaign and web portal, where members of the Orthodox community can report incidents of anti-Semitic hate.

“Our hope is that asking people to report through the OU, a trusted and well-known organization in the Orthodox segment of the Jewish community, will produce a greater readiness for victims to report,” said Hauer. “The reports in the first instance will go to SCN who already have systems in place and have the expertise to respond immediately. SCN will share the reports with the OU for analysis and use in advocacy.”

As Masters explained, “There is a vast under-reporting problem in this country for all communities.” Yet with the presence of joint security programs such as the ones that SCN runs with local Jewish federations, The Jewish Federations of North America and now the OU, “there is an increase in reporting … and sense of empowerment,” he said.

Masters said the timing could not be more appropriate given that historically, anti-Semitic incidents, particularly email and cyber threats, rise around the High Holidays.

Thus far in 2002, he said, SCN has already “recorded more incidents into our duty desk year to date than in all of 2021.”

Encouraging people to report incidents is not the only new initiative the two groups are undertaking to protect members of the Orthodox community. They are also rolling out an emergency notification system that has been rabbinically approved for use on Shabbat and holidays, when Orthodox Jews do not use phones and electricity.

Similar to a beeper, the device will notify a designated synagogue member when there is a critical security issue. Synagogue leadership and security volunteers can then take appropriate measures to notify and protect their congregation.

“Shul security has unfortunately become a high priority issue and is a regular subject of discussion and consultation,” said Hauer. “I can tell you from my own previous experience as a congregational rabbi. Twenty-five years ago, the average shul did not spend much time or money on security; the last one out of the building had to make sure the front door was securely closed.

“Today, in a large proportion of synagogues, the security committee is the largest and most active such body, and security expenditures—guards and building safety upgrades—are significant budget items,” he continued.

Both Masters and Hauer will also be sharing their ideas, experiences and concerns with the federal government, as they were both recently named to the Department of Homeland Security’s Faith-Based Security Advisory Council.

The 25-member council includes representatives from Christian, Hindu, Muslim and Sikh communities, as well as law enforcement. Other Jewish members appointed to the council are Rabbi Jonah Dov Pesner, director of the Religious Action Center for Reform Judaism and senior vice president of the Union for Reform Judaism; and Rabbi Julie Schonfeld, CEO emerita of the Rabbinical Assembly, the association for Conservative rabbis.