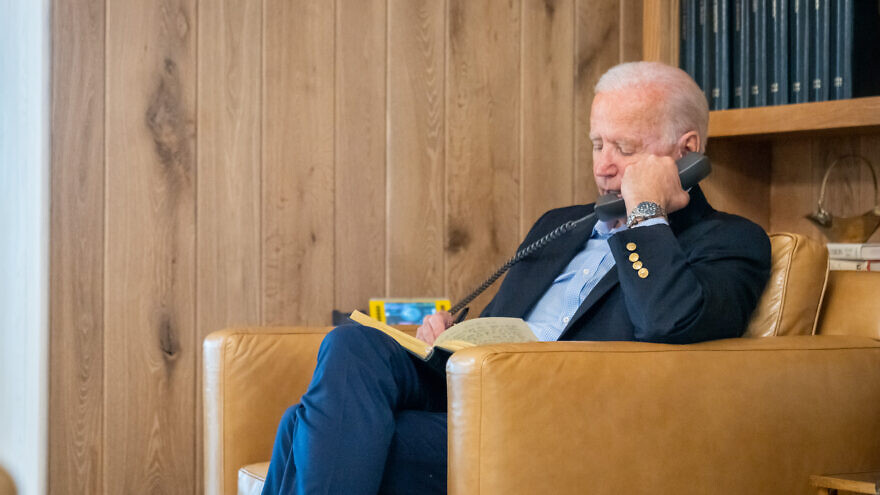 Biden started by expressing his sympathies with those affected by Hurricane Ian’s destructive path through Florida.

“I know it’s especially hard for so many Jewish families in Florida, who just finished celebrating the New Year and are now in this solemn part of the High Holidays,” said Biden. “I was just with Congresswoman Debbie Wasserman Schultz and [Congressman] Ted Deutsch (two Jewish U.S. representatives from Florida) at the reception and they’re working with me doing everything we can to help search and rescue missions, recovery and rebuilding efforts, which is going to go on for a significant amount of time, I’m afraid. And whatever it takes, we’re going to stay there until we get it done.”

He told those on the call a story about the first lady taping a note on his mirror during a particularly troubling time about eight years ago. The note contained a quote that said, “Faith sees best in the dark.”

“And that’s what all of you do every day as you look through and create light [in] your congregations all across America. So consequential. So, the main thing I want to say to you is this: Thank you. Thank you, thank you,” said Biden. “You provide strength and hope every single day of the year, and especially during this season of introspection, renewal and repentance. And it matters.”

While Biden strung together a few well-worn stories about his relationship with Israel and his meetings with various Israeli leaders, he referenced his most recent trip to the Holy Land this summer, when he met with two Holocaust survivors who emigrated to America after the war.

“They returned to that sacred ground to speak with young people, so the young would never forget. So they’d understand. The Jewish people know better than any that silence is complicit. We cannot remain silent. As president, I will not remain silent,” said Biden.

He spoke of his administration’s work with Congress to secure record funding for security for nonprofits, including synagogues and religious organizations. “No one in America should ever fear of going to a religious service or school, or walking down the street wearing a symbol of their faith,” said Biden.

He closed by beseeching those on the call to take matters into their own hands in order to affect change, noting that “the promise of tomorrow is embedded in thousands of years of Jewish history and the story of America as well.”

Deborah Lipstadt, the U.S. Special Envoy to Monitor and Combat Anti-Semitism, also joined the call for a brief question and answer session with select rabbis. She said that while domestic anti-Semitism doesn’t fall under her purview, she recently met with Deputy Attorney General Kristen Clarke, whose responsibility it is to monitor and respond to hate crimes. She said she’s also been in touch with the Department of Education on the issue.

Lipstadt, who graduated from the City University of New York system, where anti-Semitism is on the rise, took the occasion on Friday to “encourage students on campus to look to the various Jewish student organizations for help, for support, and to recognize that nothing was solved by silence.”

Friday’s call was hosted by Shelley Greenspan, the White House liaison to the American Jewish community.