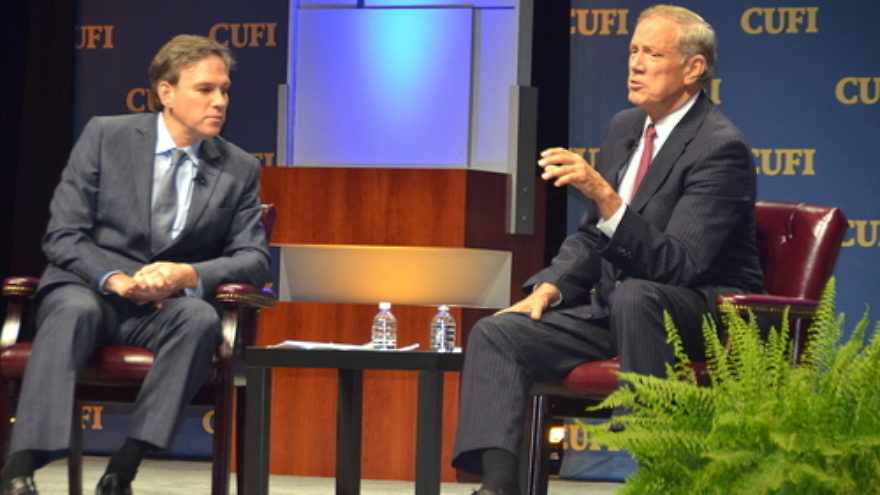 (July 14, 2015 / JNS) Six American presidential candidates made their pitch on Israel and the Middle East to thousands of prospective Christian Zionist voters on Monday at the Christians United for Israel (CUFI) Washington Summit.

The candidates’ forum comes as CUFI is launching its new Action Fund, a 501(c)(4) organization (the status for tax-exempt groups dedicated to social welfare) that will have more leeway on political activities than the existing CUFI 501(c)(3) group.

“Obviously we were limited in what we could do in overt politics [as a 501(c)(3) group], but we always said to our supporters and members that when they’re looking at a candidate for federal office or state office, it’s imperative that that this issue (Israel) be a priority with other things that they care about. With the (c)(4) we’ll have the ability to be more assertive about that,” Gary Bauer, head of the CUFI Action Fund and former U.S. under secretary of education under President Ronald Reagan, told a small group of reporters.

Below is a rundown of the issues covered by the candidates in their interviews with Stephens.

When the candidates spoke on the issue of Iran, nuclear talks between the Islamic Republic and world powers were expected to imminently reach a final agreement, but had not yet done so. On Tuesday, a nuclear deal was finalized.

Huckabee told reporters that Secretary of State John Kerry should “walk out of that [negotiating] room, get on the first flight he can to Jerusalem, stand shoulder to shoulder with [Israeli Prime Minister] Benjamin Netanyahu, and say, ‘We decided we picked the wrong dance partner, and we’re going to now stand with Israel, not with the Iranians, and we’re going to put the sanctions back on the Iranians as we’ve never seen them before, because obviously they have no intention of behaving like civil people.’”

Graham said the “worst possible outcome” for the United States and Israel “is to provide radical Islam with the capability they don’t have today.” In his estimation, the U.S. president should tell Iran, “Even if you’re an evil regime, I’m a practical guy.” As president, Graham said he would call the Iranians evil, but still talk to them, letting them know that they can have a peaceful nuclear program but not enrichment capability for a nuclear bomb. He would also assert to them that in the event of a war, they would lose. Iran is “crazy,” but not “stupid,” said Graham.

Cruz called the nuclear deal “an R&D program for the Iranian nuclear program” that Obama has pursued because he “wants a domestic political legacy, and the terms of the deal don’t really seem to matter.” Due to sanctions relief and other economic benefits for Iran, coupled with Iran’s penchant for sponsoring terrorism, the deal would transform the U.S. government itself into one of the leading financiers of terror against America, Cruz said.

Santorum warned that banking on Iranian fear of the prospect of mutually assured destruction is “a very dangerous strategy” because the Islamic Republic doesn’t necessarily mind being attacked.

“They are radical theocrats. We cannot contain them. If they get a nuclear weapon, I have no doubt that they will use it,” he said.

Bush said Obama has strayed from his initial stated objective for nuclear talks of never allowing Iran to build nuclear capacity. He said America is unwisely depending on dictators like Iran’s leaders to “realize the errors of their ways” and comply with a deal.

CUFI’s Bauer, himself a candidate in the 2000 U.S. presidential race, told reporters that whoever wins the 2016 election is “going to have a job that will be almost unimaginable if this treaty goes forward, because how do you put a nuclear Iran back in the bottle?”

Santorum called the Israeli-Palestinian conflict an “internal security situation” for the two sides. He said outright that he is “not for a two-state solution” and “may be the only person in the [presidential] field” who takes that stance.

But the other candidates weren’t exactly warm on the prospect of Palestinian statehood, either. Cruz said the U.S. or any foreign nation should not “try to impose a specific solution on the dispute between Israel and the Palestinians.” He said the U.S. “should do what it can” to facilitate Israeli-Palestinian talks, but not show “arrogance” such as Obama’s assertion that the pre-1967 lines should be a basis for negotiations.

Huckabee said there is “no such thing as a two-state solution if that means one of the states wants to kill the other one.”

“There will never be a two-state solution where Hamas is part of the process,” said Graham, referencing the now-collapsed Palestinian unity government between the Gaza-based terror group and Palestinian Authority (PA) President Mahmoud Abbas’s Fatah party. The Palestinians, Graham said, “have to reconcile themselves as to who they want to be.”

Bush said a Palestinian state can be beneficial for the U.S. “under the right conditions,” but that “clearly we are not even close” to those conditions. The U.S. should encourage a two-state solution in which Israel has safe and secure borders, is recognized as a Jewish state, and has a partner that can deliver on its promises.

Asked about Israeli construction beyond the 1967 lines, Pataki said the U.S. should “work with the Israeli government towards an intelligent approach” to Judea and Samaria and the disputed Palestinian territories. America “cannot expect Israel to go back to the insecure, indefensible” pre-1967 boundaries, he said.

Bush said Israel’s current policy on settlement construction is “acceptable,” but that the U.S. should “keep an eye on” Israeli construction in “greenfield spaces” (undeveloped areas), as opposed to developed areas, where the Jewish state should be free to build. Any U.S.-Israel dialogue on the settlements issue “should be done quietly rather than in the headlines of the newspapers in both countries,” added Bush.

Cruz called the Obama administration’s policy on Israel “heartbreaking.” He said that six and a half years ago, if one was told the president and vice president would skip a speech by Netanyahu to Congress and not meet with the prime minister at all when he visited Washington, “you wouldn’t have believed that.” Yet “that is what we’ve seen,” he said, referring to the controversy surrounding Netanyahu’s Congress speech in March.

Regarding claims that Obama is a friend of Israel, Huckabee said that “every Israeli on the street would tell you that’s just nonsense, that’s fantasy talk.” Huckabee also praised U.S. military funding for Israel, contrasting it from American aid to other nations from the perspective that the Israelis “have never asked our soldiers to spill American blood on Israeli soil.”

Pataki said that given the Obama administration’s approach to Israel, “Thank God they rely on themselves first and not others who may not be there in their time of need.” He noted that as governor, he specifically opened New York State’s Israeli trade office in Jerusalem rather than Tel Aviv, and said the U.S. should move its Israeli embassy to Jerusalem as well.

Bush said the U.S.-Israel relationship is a “source of stability” from a security perspective. Asked if he would describe Obama as a “pro-Israel president,” he said, “No, I wouldn’t.” He said the current administration’s leaking of sensitive information on Israel to the media is not something that would be seen “in a mature, strong relationship.”

Regarding the Islamic State terror group’s conquering of large sections of Iraq and Syria, Santorum stressed that the jihadist organization thrives on the public’s perception that it is successful.

“It’s a public relations war that the president is fighting, and we’re losing,” he said.

Asked if more boots on the ground are needed to defeat Islamic State in Iraq and Syria, Cruz said, “Absolutely, and the problem starts on the front end, with a commander-in-chief who hasn’t set a clear objective of destroying ISIS.” Cruz said that rather than sporadic airstrikes, which he called “photo op foreign policy,” the U.S. needs to employ “overwhelming air power” and should be “vigorously arming the Kurds” in order to defeat Islamic State.

“Most tragically, neither the U.S. nor the Europeans have been vocal enough in the atrocities committed against Christians,” he said.

Bush said Americans “have a responsibility as part of our heritage, as part of our foreign policy, to support those who are being persecuted—not just Christians, but other religious minorities.”

“You’re talking about losing vital parts of the history of mankind,” he said.