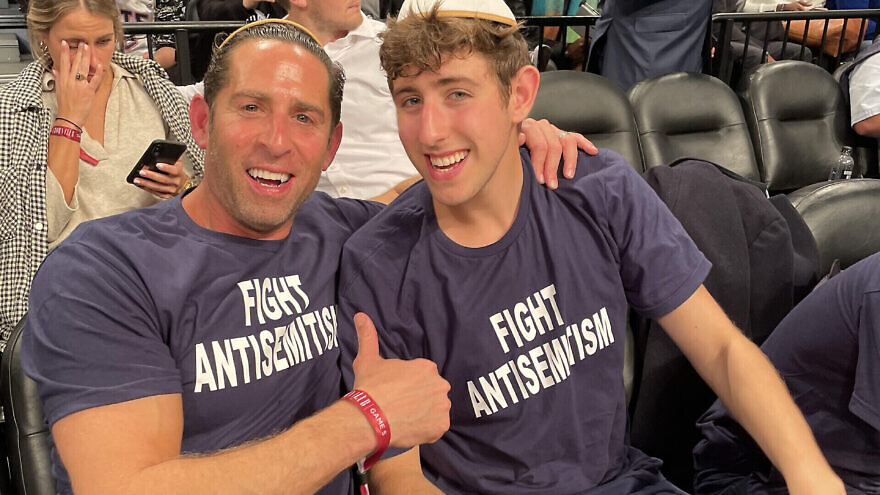 The team decided to keep Irving in street clothes for a minimum of five games, citing his failure to clearly and unequivocally disavow anti-Semitism when presented with an opportunity to do so during a Nov. 3 media session.

The Irving drama began on Oct. 27, when the former NBA champion publicized a film on Twitter titled “Hebrews to Negroes: Wake Up Black America.” The film, based on a book of the same name, includes Holocaust denial and quotes attributed to Adolf Hitler and Henry Ford and claims that Jews worship Satan and controlled the Atlantic slave trade and currently control the media.

Irving subsequently deleted the tweet and apologized on Instagram for promoting the film, saying, “To All Jewish families and Communities that are hurt and affected from my post, I am deeply sorry to have caused you pain, and I apologize.” The post didn’t go far enough to get him out of hot water with his employer.

This past Saturday night, The Athletic sports news website reported that the Nets have informed Irving of “six action items” he needs to take care of before he can suit up again:

At the same time, the Anti-Defamation League and the Nets are pressuring company leaders at Amazon to take action in regard to the film, as the anti-Semitic documentary is offered on the platform. The ADL called on Amazon to either remove the film or add explanatory context.

However, the Tel Aviv-based International Legal Forum, a global network of lawyers committed to educating about and combating anti-Semitism and racial hatred, sent a letter to Amazon Executive Chairman Jeff Bezos and President and CEO Andy Jassy demanding nothing short of “the immediate removal of this film and book from distribution.”

The ILF noted that “Hebrews to Negroes: Wake up Black America” is replete with outrageous anti-Semitic tropes and Holocaust denial & distortion. It does not have even the pretext of truth or educational value, but is seeping with racial hatred, malicious falsehoods and dangerous incitement.”

Arsen Ostrovsky, CEO at the ILF, told JNS, “So far, Amazon has not responded. But if they are serious about being a responsible voice in the community and rooting out hateful conduct from their platform, they must take immediate action and remove this film and book immediately.

“Amazon says they have a strict policy prohibiting ‘hateful conduct.’ Instead they are profiteering from Holocaust distortion and Jew-hatred,” he said.

“It is inexcusable that, with anti-Semitism and violence against Jews exploding across the United States, Amazon would provide a platform to such a hate-filled film, only pouring more fuel on the fire. This is not a matter of free speech, but rather promoting hate speech and incitement to violence,” he continued.

The ILF is sending similar letters and reaching out to other major distributors which continue to carry the film such as Apple, Spotify and Barnes & Noble, likewise calling on them to stop offering it. “We want to make sure that this abhorrent and anti-Semitic film does not see the light of day,” Ostrovsky said.

Mike Dube, the chief development officer at Sharing Seats, a nonprofit organization that provides sick and poor children and/or families event tickets that might otherwise go unused, is employing a different strategy to raise awareness of the growing anti-Semitism in the U.S. while also trying to get Irving’s attention.

At the Oct. 31, Nets-Pacers game in Brooklyn, before Irving’s suspension, Dube and a group of friends sat courtside wearing T-shirts with “FIGHT ANTISEMITISM” written across the chest. Dube told JNS that Irving certainly got the memo, as he came over to the group and said, “Good to see you, I appreciate you guys.” The initiative garnered worldwide media attention.

Reflecting on the whole Irving saga, Dube said, “After all the events that have transpired in the last week, I would love nothing more than to sit down man-to-man with Kyrie Irving and discuss the similarities between our communities and how we can work to support each other rather than tear each other down.

“This is a time for love, not hate,” Dube added. “The future of all our children is at risk. We need to be more educated on other cultures, and most importantly learn more respect and tolerance for those that believe something different than us.”