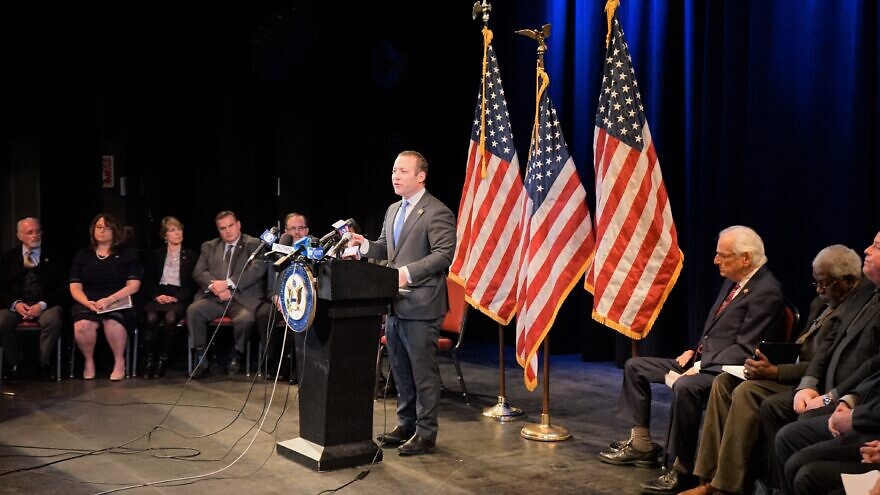 (May 27, 2021 / JNS) Four pro-Israel members Jewish members of Congress criticized anti-Semitic statements by their colleagues from both sides of the aisle on Wednesday in a letter thanking U.S. President Joe Biden for taking the rise in anti-Semitism seriously and urging him to take further steps.

“We believe we need a united, all-of-government effort to combat rising anti-Semitism in this country,” the letter writers said, citing an increased number of violent anti-Semitic acts that have occurred across the country. The letter came on the report that the Anti-Defamation League found more than 17,000 tweets in one week with some variation of the phrase “Hitler was right.”

The spate of anti-Jewish violence in North America and worldwide came during and after the hostilities launched by Hamas in the Gaza Strip against Israel earlier this month.

“In Times Square, a group yelling anti-Semitic slurs viciously beat, kicked, and pepper-sprayed an unsuspecting Jewish man. In Los Angeles, a caravan of pro-Palestinian protestors descended on a restaurant in West Hollywood, demanding to know ‘who’s Jewish?’ before unleashing a violent attack on diners while yelling anti-Semitic slurs,” the letter stated. “In Bal Harbour, a Jewish family visiting from New Jersey was harassed by four men in an SUV shouting, ‘Free Palestine, f*** you Jew, die Jew.’ In Tucson, Arizona, an individual threw a rock through a glass window, vandalizing Congregation Chaverim. Jews across the United States are facing an extraordinarily tense environment of fear and insecurity.”

The letter’s authors said that there should be no excuse for harassing and targeting Jews, blaming them on a conflict in the Middle East and holding them responsible for Israel’s actions or policies.

“Given that Jews in Europe and around the world have faced a similar increase in threats in recent weeks coinciding with the conflict, we also urge you to swiftly nominate an experienced and qualified United States ambassador-at-large to Monitor and Combat Anti-Semitism,” the letter stated.

The letter also took issue with what the signers called anti-Semitic rhetoric from certain members of Congress, pointing to recent statements from Georgia Republican Rep. Marjorie Taylor Greene (R-Ga.) comparing the wearing of face mask as a result of the coronavirus pandemic to the wearing of yellow stars forced only on Jews in Nazi Germany during the Holocaust. Other accusations from progressive members of Congress accuse Israel of being an apartheid state.

“These statements are anti-Semitic at their core and contribute to a climate that is hostile to many Jews. We must never forget that less than eighty years ago, within the lifetime of our parents and grandparents, 6 million people were murdered by the Nazis in the Holocaust because they were Jews. Israel has long provided the Jewish people with a homeland in which they can be safe after facing centuries of persecution,” said the letter.

“Sadly, we have learned from our history that when this type of violence and inflammatory rhetoric goes unaddressed, it can fuel increasing hatred and violence, and lead to unspeakable acts against Jews,” it continued. “That is why we need a united, bipartisan, national-level commitment to confront and address the threat of antisemitism head-on. Anti-Semitism is wrong, and it deserves to be unequivocally condemned by all.”

In related news, a consortium of Jewish organizations designated May 27 as a “Day of Action Against Anti-Semitism” in response to the ongoing attacks and threats happening to Jews worldwide.