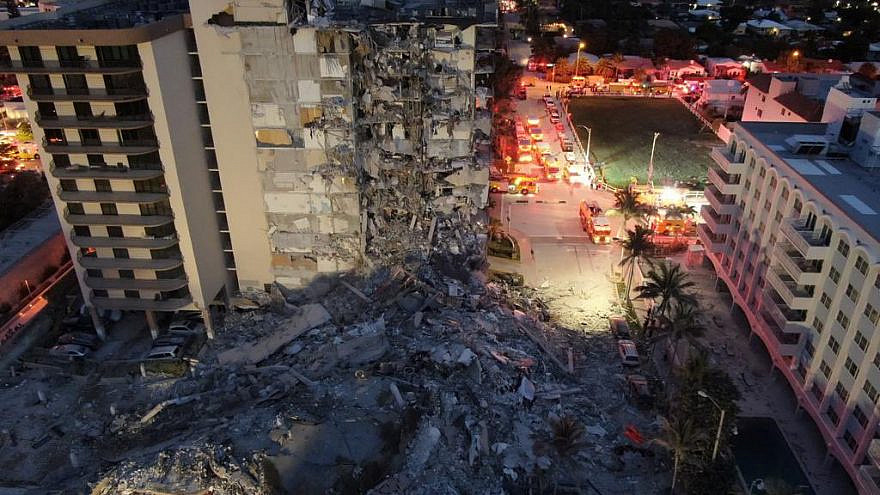 (June 24, 2022 / JNS) Friday marked the one-year anniversary of the collapse of the Champlain Towers South in Surfside, Fla., in which nearly 100 people died, many of them Jews.

Posting on social media, Hatzalah of South Florida recounted that on June 24, 2021, at 1:25 a.m., they received a call for a “medical emergency at 87th & Collins,” where they remained working and searching for 21 days.

Family members of those who perished visited the site early on Friday morning to remember, grieve and be together.

In the hours and the days that followed the collapse of the 12-story residential building, rescuers dug through the rubble in the hopes of finding survivors. At the urging of the distraught families, a search-and-rescue unit from the Israeli Defense Forces Home Front Command was flown in to help in what became a massive recovery effort.

Speaking in a webinar titled “Remembering Surfside: Reflections on the one-year anniversary of the Surfside tragedy,” Rabbi Sholom Lipskar of The Shul of Bal Harbour—just steps away from the Champlain Towers—recalled the “tragic calamity that shook our community and changed it for what I believe is always.”

“The shock of the event was of such a nature that it touched the core of everyone’s being,” he said. “The entire community and everyone here turned into a kind, giving, gentle, accommodating and loving person; all we did was extend kindness, all we did was give them whatever was possible.”

“Now, a year later, is this going to be an event like any other in history? [Where] you get charged, you get shocked and then slowly the motivation goes down and you go back to normal?” the rabbi asked, imploring people to remember the many acts of kindness and sensitivity that emerged in those days.

“Let us rethink our inspiration recommit ourselves to this kindness and ask yourself to do one thing more or one thing better in the world of kindness,” he said, “ … then this commemoration will have proper meaning.”

The webinar was sponsored by Chai Lifeline, a crisis support service that ran a 24-hotline for those impacted by the building’s collapse.

In his remarks, the CEO of the organization, Rabbi Simcha Scholar said “this devastating, difficult situation still hurts. We think about the orphans, the widows, the widowers and a community that suffered so greatly.”

Noting the Jewish teaching that all of Israel is responsible for each other, said Scholar, people need to feel as if they are together with those who lost so much on that day: “This is our challenge, and this is our goal.”