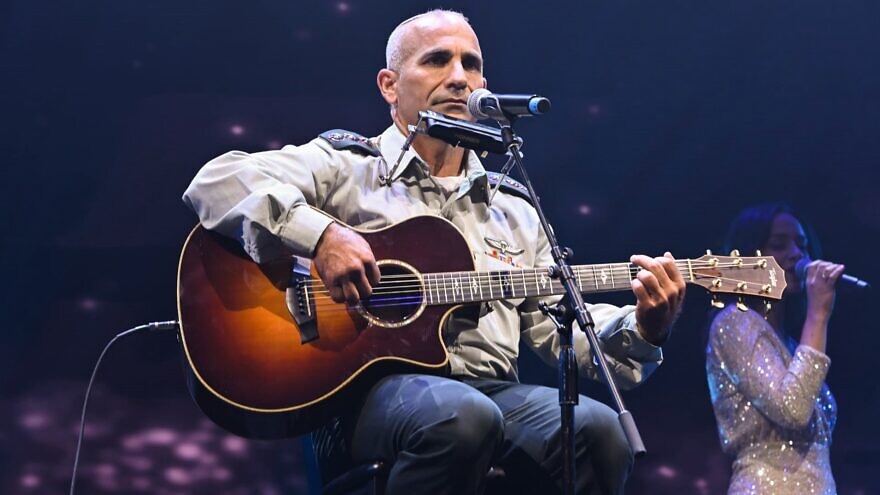 Israeli Col. Golan Vach, who led the IDF’s National Rescue Unit mission in the wake of a condominium collapse in Surfside, Fla., this summer, performed “Hallelujah” in tribute to the 98 victims, as part of the Israeli-American Council’s 2021 National Summit, Dec. 9, 2021. Credit: IAC.
Spread the word.
Help JNS grow!
Share now:

(December 10, 2021 / JNS) The Israeli commander of a search-and-rescue team that came help in the wake of a condominium collapse in Surfside, Fla., this past summer stunned an audience on Thursday night by performing “Hallelujah” in tribute to the tragedy’s 98 victims and their loved ones.

Ahead of the surprise performance, Miami-Dade County Chief Public Safety Officer J.D. Patterson presented Vach with an official proclamation as “a form of gratitude and praise” that June 27 will be “Miami-Dade Israel Friendship Day” in honor of the unit’s efforts at the condo collapse site.

Before performing, Vach, who is the grandson of Holocaust survivors, noted that his team’s work in the Miami area marked the first time ever that the United States allowed a foreign army to operate on its soil in a humanitarian assistance mission. He then dedicated the song to the Surfside victims, families and loved ones.

“We who were with you in the difficult moments continue hugging you and carrying you in our thoughts and prayers every day,” he said.

Over the last 12 years, Vach and his team’s specialists have worked alongside emergency organizations dealing with natural disasters in Haiti, the Philippines, Nepal, Mexico, Brazil, Albania, Honduras and the United States.

See the full performance here (starting at 1:00:12) or click here for part of the performance.