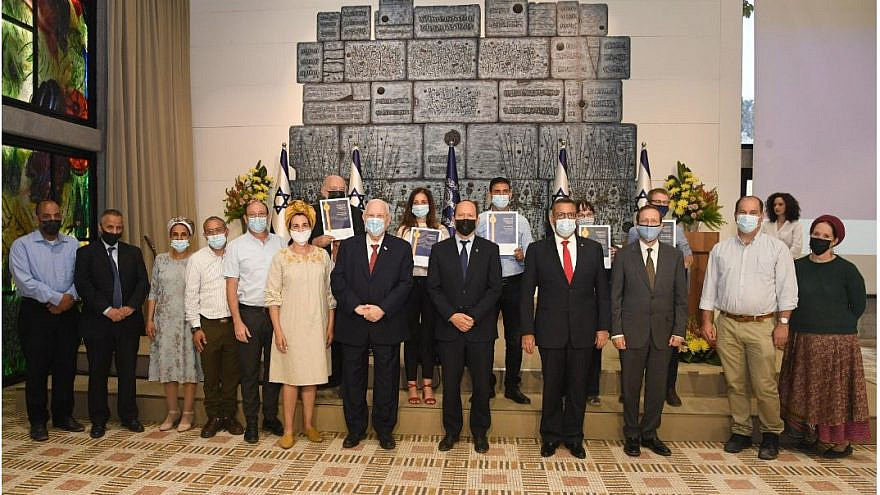 (May 4, 2021 / JNS) Israeli President Reuven Rivlin hosted the seventh Jerusalem Unity Prize ceremony at his official residence in the capital on Monday.

The event, which is a joint initiative of the Jerusalem Municipality, Gesher and the families of Eyal Yifrah, Gilad Shaer and Naftali Frenkel—the teenagers abducted and killed in 2014 by Hamas terrorists—was held in cooperation with Israel’s Social Equality Ministry.

This year’s winners were the Shorashim inclusive school in Natur, in the Golan Heights; the Desert Stars school for Bedouin leadership in the Negev; the Almogim school in Kiryat Yam; the Be’liba Choma-A Wall at its Heart program; and Jewish educator Avraham Infeld.

Rivlin opened his remarks by addressing the murdered boys’ parents, who launched the prize in 2015 in their sons’ memory.

“In the hardest times, when we were all anxiously awaiting news of the fate of the boys, you were a source of strength and consolation for us. The self-restraint you showed gave us confidence and belief,” he said.

“Unfortunately, when we found out their fate, and when the worst of all possible news came, our hearts were broken. The whole people was shrouded in grief and even then, you found the strength to reach out a hand of support and comfort,” he added, going on to talk about last week’s Lag B’Omer tragedy, in which 45 people were killed and another 150 injured.

“Just a few days ago, we saw that the unity and partnership of Israeli society are not a one-off,” he stated, lauding the public’s “tremendous effort” to aid the families of the victims.

“At the moment of truth, we are one human fabric,” he said, going on to refer to the current political situation.

“After four elections in two years, and in the midst of a most severe political crisis, the question of unity and partnership is an existential one right now … perhaps, one of the most existential that we face as a society,” he added.

Addressing the Jerusalem Unity Prize-winners, he concluded: “You are on the front line. Each one of you is working in their unique field to strengthen the links and to create a larger common denominator for us all.”