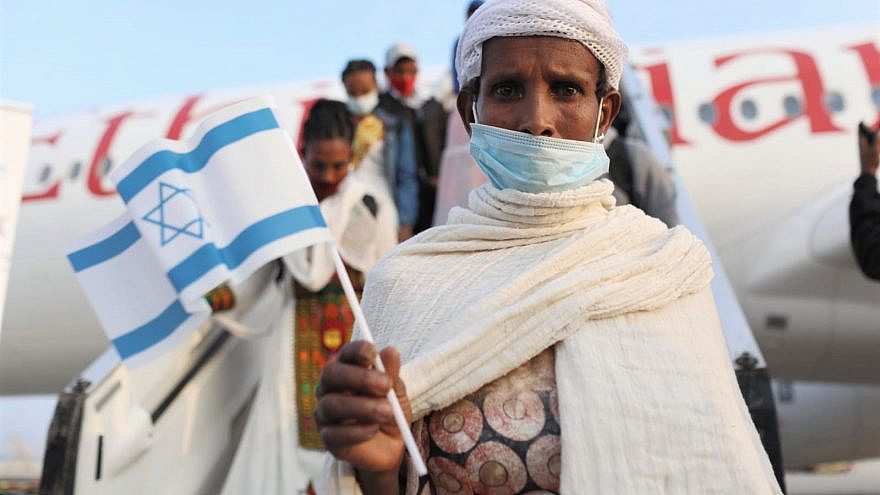 (December 25, 2020 / JNS) A plane carrying 219 new immigrants from Ethiopia to Israel landed at Ben-Gurion International Airport on Tuesday. Their arrival was overseen by the Ministry of Aliyah and Integration, the Jewish Agency of Israel, and the International Fellowship of Christians and Jews (IFCJ).

It marks the second flight of “Operation Tzur Israel” (“Rock of Israel”).

The group was welcomed by Pnina Tamano-Shata, Minister of Aliyah and Integration; Yael Eckstein, president and CEO of the Fellowship; and Amira Ahronoviz, director general of the Jewish Agency for Israel.

Tamano-Shata said that “through the end of January, and in accordance with the government decision I approved last October, a plane carrying hundreds of Ethiopian immigrants will land in Israel almost every week until the 2,000 people who have waited many years to arrive are reunited with their families.”

She was referring to Government Resolution 429, which provides a framework to bring 2,000 Ethiopian Jews to Israel by the end of the year. The Dec. 22 flight—the second to arrive under the operation—brought in 219 immigrants, including 136 adults, 70 children and 13 babies.

Eckstein said her organization will make “every effort to assist them and the entire Ethiopian community.”

“This is the closing of a particularly moving circle,” said Ahronoviz. “After years of not seeing one another, entire families are being reunited. Since the establishment of the state, the Jewish Agency has brought 95,000 immigrants from Ethiopia and helped absorb them into Israel. I wish to thank our partners in Israel and around the world for their joint participation to end their suffering after many long years of waiting.”

The new arrivals will go into quarantine, as is the procedure for incoming passengers during the coronavirus pandemic. They will then be reunited with family members. As part of the absorption process, they will receive support and guidance in all aspects of Israeli life, including learning Hebrew and preparation for employment and education.

The flights were made possible by the Jewish Agency; the Jewish Federations of North America and Keren Hayesod; and the support of international donors and foundations.