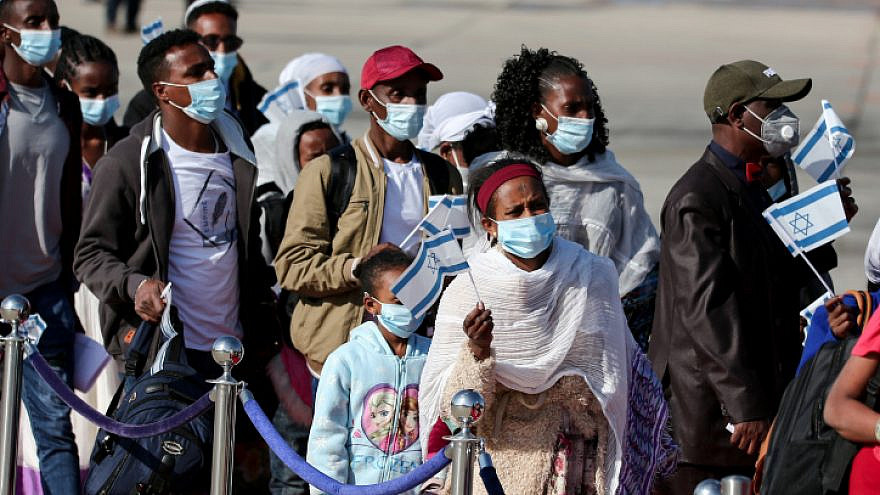 (December 3, 2020 / JNS) Israeli Prime Minister Benjamin Netanyahu on Thursday greeted at Ben-Gurion International Airport the first group of Ethiopian immigrants to arrive in the country within the framework of “Operation Tzur Israel” (“Rock of Israel”).

The 316 immigrants are among approximately 2,000 who are slated to make aliyah by the end of January as part of the operation, approved in October 2019, to reunite them with their families in Israel, according to the Prime Minister’s Office.

“I do not remember, for many years, when I have been moved so much at a sight of such refined Zionism that expresses all of its significance,” Netanyahu said at the ceremony in a tent on the tarmac. “My wife Sara and I stood here with tears in our eyes … when we saw the immigrants, our Jewish brothers and sisters from Ethiopia, leave the plane with baskets—like we remember, like I remember from my childhood—they alight and touch the ground, the land of Israel,” he added.

“The mother kisses the ground and carries an infant named Jerusalem, and another infant is named Esther. Esther and Jerusalem are coming to Jerusalem; this is the essence of the Jewish story. This is the essence of the Zionist story,” he said, adding, “Therefore, we, dear brothers and sisters of ours, immigrants from Ethiopia, we are so moved to welcome you here. Welcome to the land of Israel. Welcome to the State of Israel.” 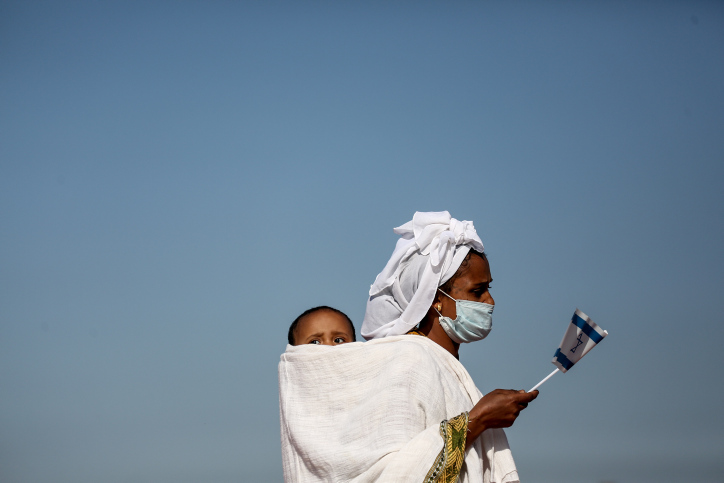 Netanyahu informed Ethiopian Prime Minister Abiy Ahmed in October about his intention to bring to Israel some 2,000 Ethiopian Jews currently in Addis Ababa and Gondar waiting to immigrate. In a phone conversation during which the two leaders discussed regional issues, Ahmed readily agreed to the move and stressed the special bond between the people of Ethiopia and Israel.

Ahmed also congratulated Netanyahu on the Abraham Accords—the U.S.-brokered peace agreements that Israel reached with the United Arab Emirates and Bahrain in September—saying that the positive ramifications of the deals will only be understood by future generations.

Approximately 13,000 Jews currently reside in Addis Ababa, the Ethiopian capital, and in Gondar in the northern part of the African country. Most live in poverty and are waiting to be taken to Israel, which they consider their homeland. Many have family members who have been living in Israel since “Operation Moses” in 1984 and “Operation Solomon” in 1991, when the Israel Air Force Israel airlifted a total of some 20,000 Jews out of Ethiopia.

“Some 250 people have left for Israel within the past year until COVID-19 came. Now the travel has stopped, but Israeli officials are conducting interviews online,” said Nigusie Alemu Eyasu, program director for the Ethiopian Jews’ Community.

Due to Israel’s coronavirus restrictions on gatherings, the new immigrants who arrived on Thursday were not greeted by their family members at the airport and entered the required two-week quarantine, according to Keren Hayesod.