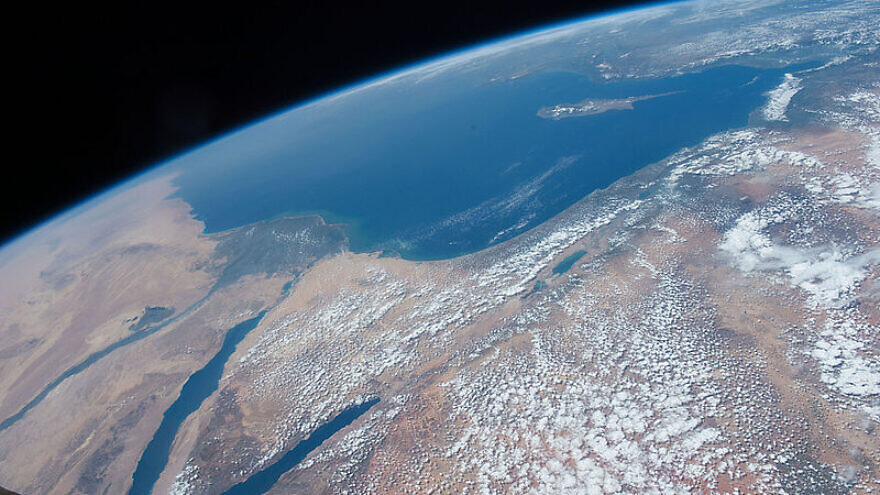 The Middle East as seen from 250 miles above in this April 14, 2016 photo from the International Space Station. Countries seen, from left, along the Mediterranean coast include Egypt, Gaza, Saudi Arabia, Israel, Lebanon, Syria and Turkey. Credit: NASA via Wikimedia Commons.
Spread the word.
Help JNS grow!
Share now:

(November 16, 2020 / Israel Hayom) Eytan Stibbe, a former Israeli fighter pilot, will soon become the second astronaut in the country’s history, the Israel Space Agency announced on Monday in a special televised statement from the President’s Residence in Jerusalem.

Stibbe is slated to take off for the International Space Station in late 2021 for a mission of a little more than a week.

Israel’s first astronaut, Ilan Ramon, and the six other members of the 2003 STS-107 mission of Space Shuttle Columbia were killed in a shuttle reentry disaster just 16 minutes before they were due to land back on Earth.

Tal Ramon, his son, took part in the press conference at the President’s Residence where Stibbe’s space mission was announced.

The 2021 mission is slated to last for 200 hours, which Stibbe is meant to use to conduct a series of experiments intended to advance Israeli technologies and scientific developments by researchers and startups, according to the ISA.

Stibbe is slated to travel into space on a shuttle launched from Florida. His training is expected to begin early next year.

“As a child, on dark nights I used to look up to the sky and wonder what’s there beyond what I could see,” Stibbe said in a statement. “It takes great courage for us to be able to release ourselves from that which ties us down, to leave gravity.”

Israeli President Reuven Rivlin said the announcement marked “a day of national joy, and great pride. An Israeli pilot with a blue-and-white flag embroidered on his shoulder will prove once again, as we have been showing here for 72 years, that even the sky is no limit for us.”

Rivlin lauded Stibbe as “Israel’s representative in the human effort to understand the miraculous mechanism that enables life on this globe, and to crack the secrets of the universe. Go in peace, and return in peace,” he concluded.