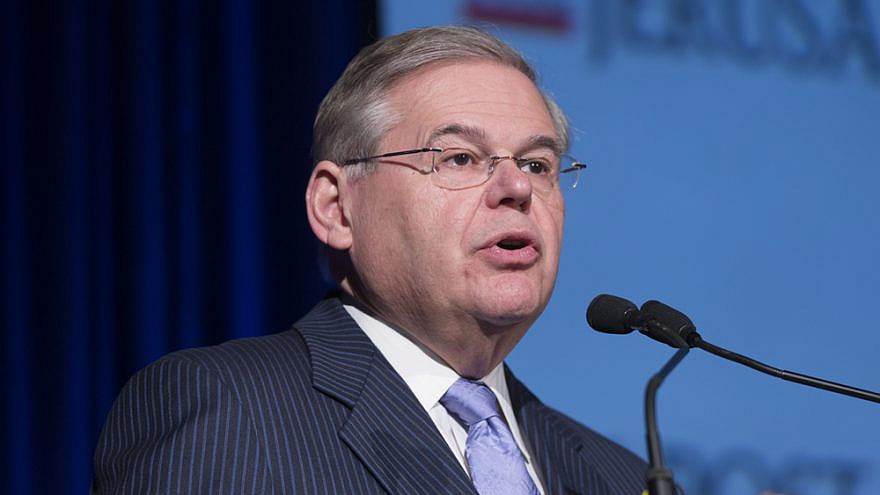 (June 4, 2021 / JNS) Senate Foreign Relations Committee chairman Robert Menendez (D-N.J.) said on Thursday that the relationship between the United States and Israel is more important than any one person on the day after it became clear that Israel’s Prime Minister Benjamin Netanyahu will likely not continue in his position.

Menendez spoke in a video-recorded introduction during the final session of the first virtual leadership policy summit of the Israel Policy Forum.

“Our relationship is rooted in shared democratic values and a shared interest in promoting peace and stability for Israel, its neighbors and the whole region in protecting and defending a Jewish and democratic state where all people can live in freedom and dignity,” he said.

Menendez said he still deeply believes that negotiating a two-state solution between Israel and the Palestinians is the most viable option for long-term stability in the region and that America should continue to play a role to facilitate that outcome.

Yet he cautioned the United States and other nations against trying to force that outcome and warned against small factions trying to capitalize on the violence.

“Unfortunately, the most recent round of tragic violence has reminded us that however small their faction may be, the actors who actively do not want this outcome are willing to use varying degrees of violence to promote their own agenda and make a sustainable, peaceful outcome all the more difficult,” he said. “But let me be clear: In the face of a terrorist organization committed to Israel’s destruction, willing to indiscriminately attack civilians and put others directly in harm’s way, Israel has every right to defend herself and her population, full stop.”

Menendez, who has long been a stalwart supporter of Israel, did criticize the Jewish state’s actions during the recent Gaza conflict, when he said he was “deeply troubled” by Israel’s strike on the media tower in Gaza that housed the offices of the Associated Press and Al-Jazeera.

Nevertheless, as the chair of the Senate’s Foreign Relations Committee, the Democratic senator has an influential role to play as the Biden administration pursues its efforts to rebuild the Gaza Strip, restore ties with the Palestinian Authority and negotiates with world powers and Iran over returning to the nuclear deal. Israel and its supporters in Washington are concerned over the Biden administration’s moves, especially on Iran. Menendez opposed the 2015 Iran nuclear deal.

‘Ways to empower those who work towards cooperation’

Menendez laid out a three-pronged strategy he thinks can overcome the elements in the way.

The first, he said, was to push back on all efforts to use the U.S.-Israel relationship for partisan political gain.

He singled out those who have called for halting, slowing down or conditioning aid to Israel as Hamas in the Gaza Strip launched thousands of rockets into civilian areas and elicited a military response from Israel, as well as those calling for the United States to withhold assistance to Palestinians that Congress had authorized and appropriated in full compliance with the Taylor Force Act and all other applicable laws—an action, he said, that gives the nations less of an entry point to negotiate peace.

The United States, he said, should also push back against the delegitimization of Israel on the global stage, including stopping the BDS movement from “seeping into completely unrelated conversations.”

His second recommendation was for the United States to engage more productively with the Palestinians, as opposed to what he said was the Trump administration’s “shutoff” concerning engagement. Including the Palestinians at the negotiating table is more likely to garner results such as ending the martyr payment system—known as “pay for slay” which financially rewards terrorists and their families—as well as reforming U.N. Relief and Works Agency (UNRWA).

The senator also said that the United States needs to continue strengthening the new alliances formed under the Abraham Accords—namely, the United Arab Emirates, Bahrain, Sudan and Morocco. Still, he added, those alliances should not be rewarded with sales of advanced U.S. weapon systems that could potentially threaten Israel’s Qualitative Military Edge and American national security unless the sales “meet all the measurements of U.S. national security interests we establish in considering arms sales.”

Lastly, Menendez said America must be a reliable and honest friend to Israel, but must find nuance in telling the truth while standing by it when it is under attack.

“At this moment, we must find ways to empower those who continue to work towards cooperation and a two-state solution,” he said. “While the big decision is about the fate of Israelis and Palestinians will be driven by high-profile political acts of courage, the people making those choices will be driven by the people they represent. So now, let us focus on building up those voices who want to work in support of peace, who want to work in support of prosperity—those people who are willing to do the hard work.” 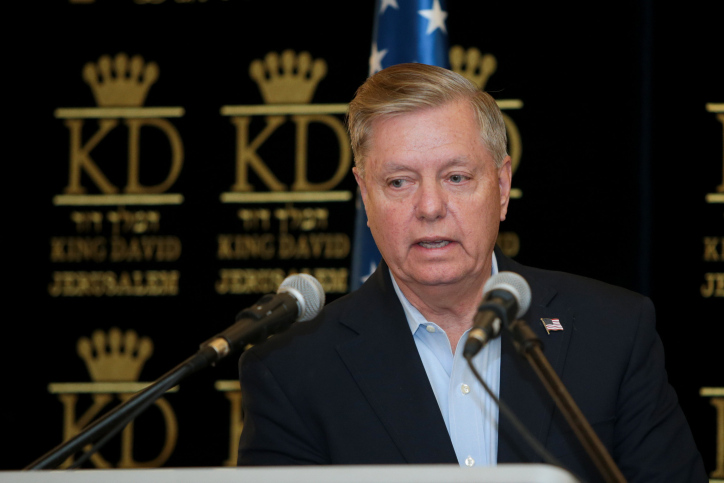 U.S. Sen. Lindsey Graham speaks during a press conference in Jerusalem, on July 2, 2019. Photo by Flash90.

While Menendez did not speak about Iran during his address to IPF, he and Republican colleague Sen. Lindsey Graham of South Carolina co-wrote an op-ed in The Washington Post that day advising the Biden administration to pursue a different strategy from rejoining the 2015 Iran nuclear deal, officially the Joint Comprehensive Plan of Action.

The senators wrote that if Iran was truly interested in abandoning its ambition to build a nuclear weapon and pursuing nuclear-enrichment capabilities solely for power generation, then it should have no problem in agreeing to receive nuclear material from a nuclear fuel bank established by the International Atomic Energy Agency. When Tehran agrees to the arrangement, the United States should also agree to more sanctions relief.

The ability for all countries to access nuclear fuel for commercial energy with it being monitored internationally would prevent a nuclear arms race in the Middle East, according to Graham and Menendez.

“If Iranian leaders truly desire a peaceful nuclear program, then they ought to welcome the creation of a nuclear fuel bank for the Persian Gulf region,” wrote Menendez and Graham. “The IAEA has already established a nuclear fuel bank that any member can access in case of a disruption in existing fuel arrangements. This could be expanded to guarantee that any gulf state can fuel its commercial nuclear reactors from an IAEA fuel bank on the condition of forgoing domestic uranium enrichment and reprocessing.”

They concluded that “a regional nuclear fuel bank could provide a reliable, affordable and transparent source of nuclear fuel for any state that sought a peaceful commercial nuclear program. This approach could multilateralize the nuclear issue and stop a nuclear arms race in the Middle East.”