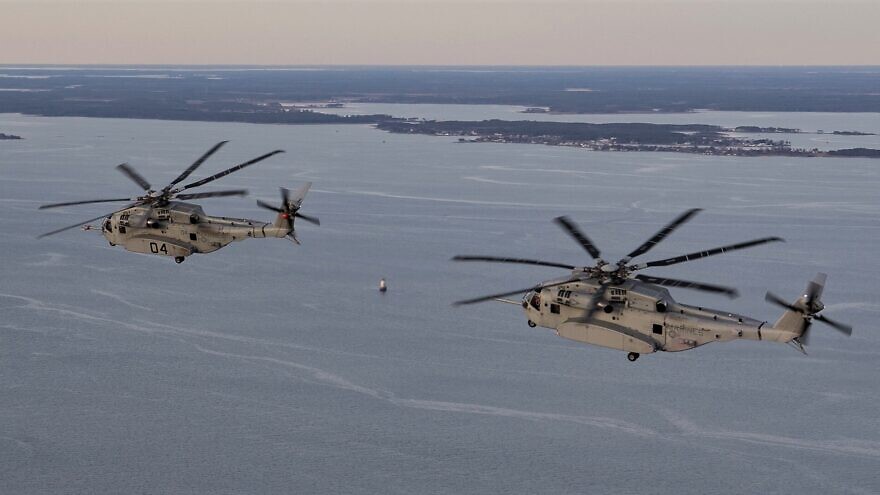 Senior Israel Air Force officials fly on heavy-lift helicopters similar to the ones they are set to receive in 2025. Photo courtesy of Sikorsky Aircraft Corporation.
Spread the word.
Help JNS grow!
Share now:

IAF Chief of Staff Brig. Gen. Eyal Grinboim and his staff met with Maj. Gen. Gregory Masiello, program executive officer for air anti-submarine warfare, assault and special-mission programs. According to the report, Masiello and Col. Jack Perrin, manager of the heavy-lift helicopter program, “gave the IAF group an overview of the CH-53K, and a status update on current tests and production.”

“The visit included an opportunity to copilot the aircraft,” the report stated. “The flight demonstrated the power and capabilities of the CH-53K aircraft.”

Grinboim’s visit to the program office was the first since Israel’s decision in late 2021 to purchase 12 Sikorsky-made CH-53K and begin to modernize its aging fleet of transport helicopters.

The IAF signed a Letter of Offer and Acceptance on Dec. 30 with the U.S. government. The first deliveries are planned for 2025.

“As the long-range logistic support backbone for the U.S. Marine Corps, the CH-53K will support Israeli special operations programs first, as well as provide the Israeli Defense Forces with a platform that has the speed, safety and gross weight capability to support all of its missions, including troop and cargo transport, and search and rescue,” said the report.

It added that for the United States, the CH-53K will transport Marines, heavy equipment and supplies “during ship-to-shore movement in support of amphibious assault and subsequent operations ashore.”