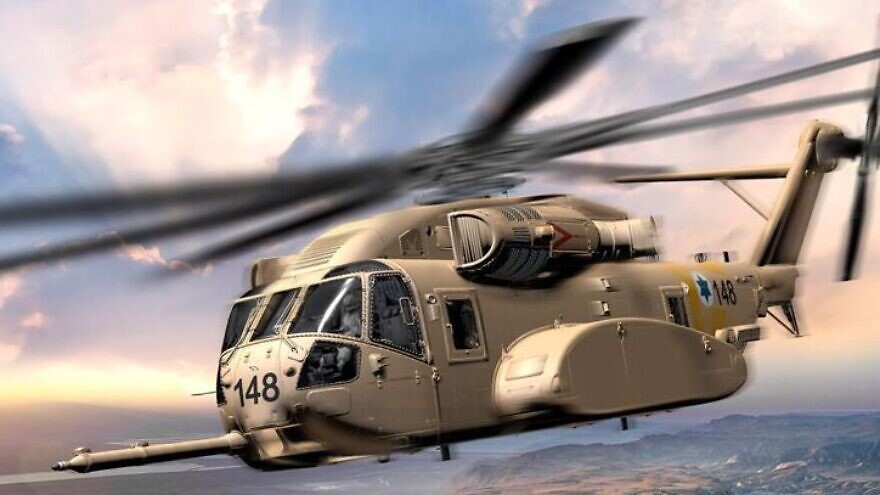 (January 4, 2022 / JNS) The signing of a Letter of Agreement between Israel and the United States on Dec. 30 for the purchase of 12 Lockheed Martin-Sikorsky-made heavy-lift helicopters, of the CH-53K King Stallion model, represents a long-awaited step that will enable the Israeli Air Force to begin modernizing its aging fleet of transport helicopters.

While unrelated, the timing of the agreement comes after Monday’s tragic and deadly crash of the Eurocopter AS565 Panther helicopter off Haifa’s coastline, in which two IAF officers were killed. The cause of that crash has yet to be established, and the helicopter model in question is different from the heavy-lift fleet aircraft.

The IAF received its first pair of “Yasur” Sikorsky-made CH-53 helicopters all the way back in 1969, building up its fleet in the years that followed. In subsequent decades, it relied on ingenious maintenance and upgrade programs to keep the aging fleet in the air and extend its lifecycle, while budgetary issues kept delaying the IAF’s ability to procure replacement platforms.

The helicopters play a number of key roles, such as transporting combat personnel, supplying forces, rescue operations, patrols, and massive troop deployment. They can also conduct electronic warfare missions, and enable special forces to conduct raids on facilities deep in enemy territory—as they did during the 2006 Second Lebanon War.

Yet the time to replace them has passed, and the IAF cannot rely on its maintenance program indefinitely to operate its two squadrons of veteran CH-53s.

The Dec. 30 agreement for the purchase of 12 new CH-53Ks (at an estimated cost of $2 billion, drawn from U.S. foreign military funding for Israel), with an option to purchase six more, means that the first helicopters are due in Israel in 2026.

The new helicopters will be able to take both personnel and armored vehicles into combat zones. They employ the latest fly-by-wire technology (purely digital electric control systems), and they come with a simulator that enables much of the flight training to take place on the ground, at a cheaper cost.

Originally scheduled to arrive in 2025, the minor delay in delivery means that the IAF will have to keep relying on its maintenance capabilities for another four years.

It is fair to assume that the IAF will install many of its own systems onboard the aircraft once it arrives, to make it suitable for Israel’s unique set of threats.

‘The most powerful helicopter ever produced’

The Defense Ministry described the new helicopters as a milestone in the strengthening of the IDF’s capabilities and “force buildup and preparedness to face existing and future threats.”

Israel first announced its decision to purchase the new helicopters in February 2021. In the lead-up to the decision, IAF officials traveled to the United States and conducted in-depth flight evaluations of the CH-53K together with Lockheed Martin-Sikorsky representatives.

Lockheed Martin’s production facility in Stratford, Conn., is producing all of the foreign orders.

Lockheed officials describe the CH-53K as the most powerful helicopter ever produced in the United States.

During a briefing with journalists held in May 2019, Beth Parcella, director of the international CH-53K program at Lockheed Martin, said, “It will meet the future warfighting requirements of the U.S. Marine Corps for the next 50 years. It has multiple mission designs: humanitarian, troop transport, sea-to-shore operations, and medical evacuations.”

The CH-53K can carry 16,300 kilograms for 110 nautical miles (170 kilometers) and an enlarged cabin compared to its predecessor.

Flight crews are not required to manage their three engines.

According to Parcella, the U.S. Marine Corps played a key role in helping Sikorsky design the helicopter, concluding in 2005 that “there is no aircraft on the market that could meet its future requirements. Then they awarded the sole source contract to Sikorsky. Since then, we have developed it full cloth. It fits the footprint of a legacy CH-53. But make no mistake, this is a new 21st-century design, designed in a completely digital environment. It is designed with maintainers in mind.”

Rob Pupalaikis, a test pilot for the CH-53K program and a former U.S. Army pilot, said during the briefing that large helicopters designed in the 1960s and ’70s were made to “carry big stuff, and if they’re hard to fly, the pilots will be trained harder.”

The CH-53K is different, in that it is built specifically for degraded visual environments, and automates multiple stages of flight, taking plenty of burden off the pilot’s plate.

“The helicopter can robustly handle those conditions without a pilot having to do a lot of flying,” Pupalaikis stated at the time.

This means that in a dust cloud, he explained, the helicopter can enter a hold and a deceleration mode, “letting the helicopter do all of the work for you. It brings you down to a hover height of your choice, the speed of your choice, and from that point you lower control and it puts you on the ground. Similarly, on the way up, it is totally stable in position hold, you push it from park to hover, and then fly away.”

Such capabilities will mean that future IAF crews will arrive at combat missions with new advantages and that Israel’s future transport helicopter squadrons will finally be suitable for the 21st century.