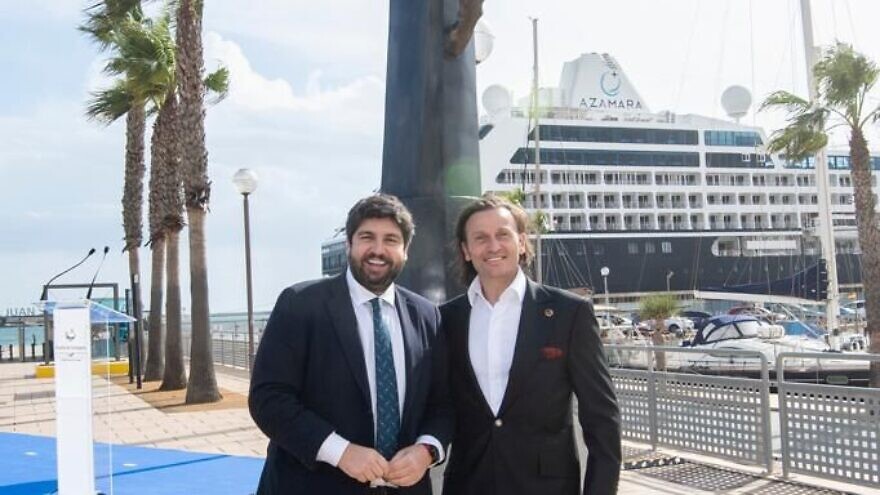 A monument called “El Abrazo” (“The Embrace”) was erected in the port of Cartagena, Spain marking 530 years since the Alhambra Decree that forced the expulsion of Jews from Spain. Credit: Courtesy.
Spread the word.
Help JNS grow!
Share now:

(April 5, 2022 / JNS) The board of the Hispanic Jewish Foundation (Fundación HispanoJudía) erected a monument in the port of Cartagena in Spain to mark 530 years since the Alhambra Decree that forced the expulsion of Jews from Spain.

The foundation said it commissioned the piece, “El Abrazo” (“The Embrace”), for the José Sacal Foundation “as a gesture of the new relationship between the Hispanic and Jewish worlds.” Mexican Jewish artist José Sacal died during the coronavirus pandemic.

The monument’s location is also significant because the port of Cartagena was the last place in the Iberian Peninsula that Jews saw before they left Spain by sea following the anti-Jewish decree.

The monument’s unveiling was attended by the regional government of Murcia, led by its president, Fernando Lopez Mira; the mayor of Cartagena; Hispanic Jewish Foundation president David Hatchwell; and 30 members of its board of trustees from various countries.

On March 31, 1492, Spain’s Catholic monarchs, Isabella I of Castile and Ferdinand II of Aragon, signed a decree ordering the expulsion of practicing Jews from their kingdoms by July 31 of that year. Those who did not leave or convert to Christianity were sentenced to death.

The Alhambra Decree was in effect until the Spanish Constitution of 1869 officially granted freedom of religion. By then, hundreds of thousands of Jews had fled Spain.

“The decree was the last stroke of anti-Semitism that ended one of the most magnificent Jewish Diaspora communities in history,” said Hatchwell. “What occurred in the Iberian Peninsula over the following 500 years was the cruel and complete eradication of anything associated with Judaism. However, Spain is currently experiencing a revival of its Jewish community.”

López Mira said the statue honors “all those who were forced from their homes and left their lives behind, but who nonetheless never gave up on their dream to return.”

Spain established diplomatic relations with Israel in 1986. In 2015, a law was passed that gives the right to the descendants of Sephardic Jews to obtain Spanish citizenship.