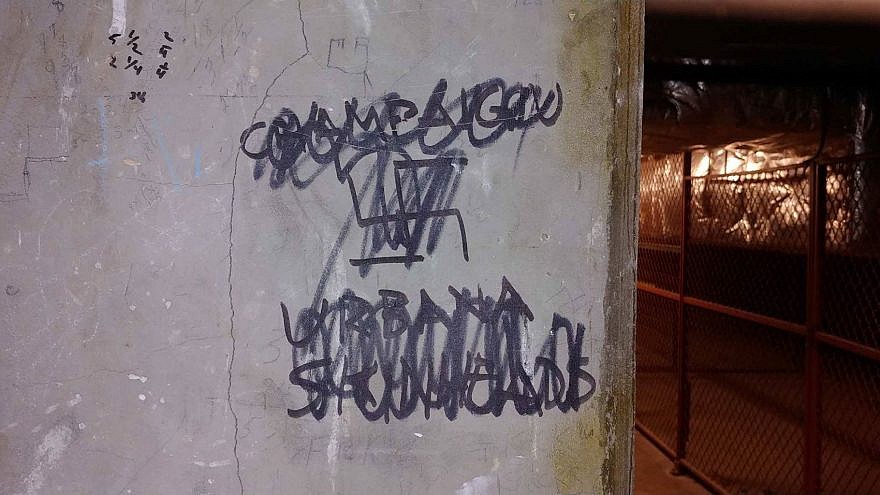 A swastika scrawled in a tunnel connecting chemistry buildings at the University of Illinois-Champaign was discovered between Nov. 16 and Nov. 19, 2018. Credit: Elan Karoll.
Spread the word.
Help JNS grow!
Share now:

(October 26, 2021 / JNS) A new national survey conducted for Hillel International and the Anti-Defamation League revealed information about the number of Jewish college students across the United States who personally experienced anti-Semitism on campus during the last academic year.

According to the survey, released on Tuesday, 32 percent of Jewish students were targeted in anti-Semitic incidents, which most commonly were offensive comments online or in-person, and damage or defacement of property. A total of 79 percent said that it happened to them more than once.

Additionally, 31 percent of Jewish students witnessed anti-Semitic activity on campus that was not directed at them. Many respondents said they saw swastikas drawn on campus, in addition to the vandalism of Jewish fraternities, sororities and cultural buildings.

A smaller sampling, 15 percent of Jewish college students, also said they felt the need to hide their Jewish identity from others on campus, and just 12 percent said they were blamed for the actions of the Israeli government because of their Jewish faith.

The survey has a margin of error of plus or minus 4 percent. It was conducted by College Pulse, an online survey and analytics company that focuses on college students, from July 7 to Aug. 21. It included 756 undergraduate students who identify as Jewish and are currently enrolled in 270 different four-year colleges and universities across America.