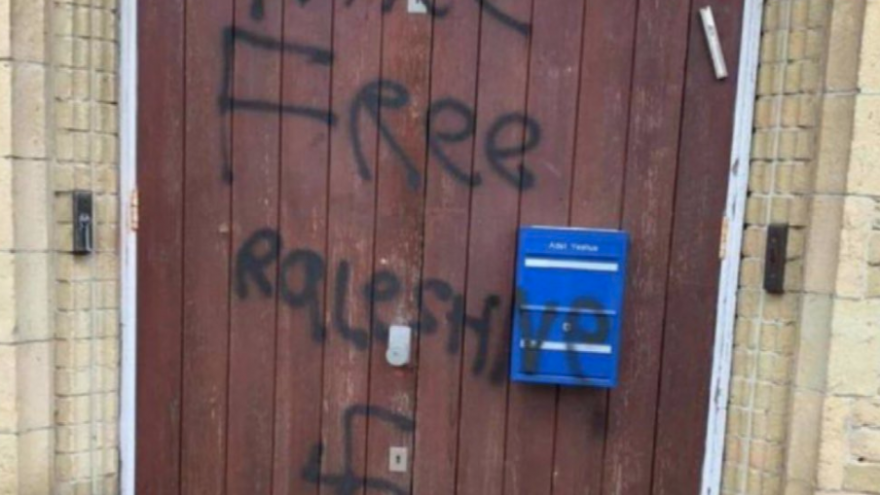 A photo of a synagogue in Norwich, England, circulating online shows a swastika along with the word “ki** and “Free Palestine.” Source: Screenshot.
Spread the word.
Help JNS grow!
Share now:

(May 14, 2021 / JNS) Law enforcement in Norwich, England, is asking for the public’s help after a synagogue was vandalized overnight.

According to the Norfolk Constabulary, “The incident happened sometime between 4 p.m. on Thursday 13 May and 7:30 a.m. on Friday 14 May when offensive graffiti was sprayed onto the door of a synagogue in Essex Street.”

An investigation is ongoing, and officers “are conducting reassurance patrols in the area. Police are appealing for anyone who may have witnessed the incident or has any information concerning it, to come forward.”

A photo of the synagogue that is circulating online shows a swastika, along with the word “ki**” and “Free Palestine.”

This incident comes amid concerns about potential anti-Semitic attacks on Jews and Jewish institutions across Europe as Hamas continues to fire rockets at Israel.

The Community Security Trust, the security arm for the Jewish community in the United Kingdom, released a statement earlier saying it has “recorded a sharp rise in anti-Semitic incidents in the U.K., linked to the conflict in Israel and Gaza. This includes verbal abuse, threats, and a very large amount of hatred in social media and online. We have also seen numerous anti-Israel demonstrations featuring large crowds of angry protesters, a minority of whom have used anti-Semitic chants or placards. This may heighten local tension and potentially cause more anti-Semitism.

“CST expects the levels of anti-Semitism to continue or indeed worsen until the conflict in Israel and Gaza subsides … .”