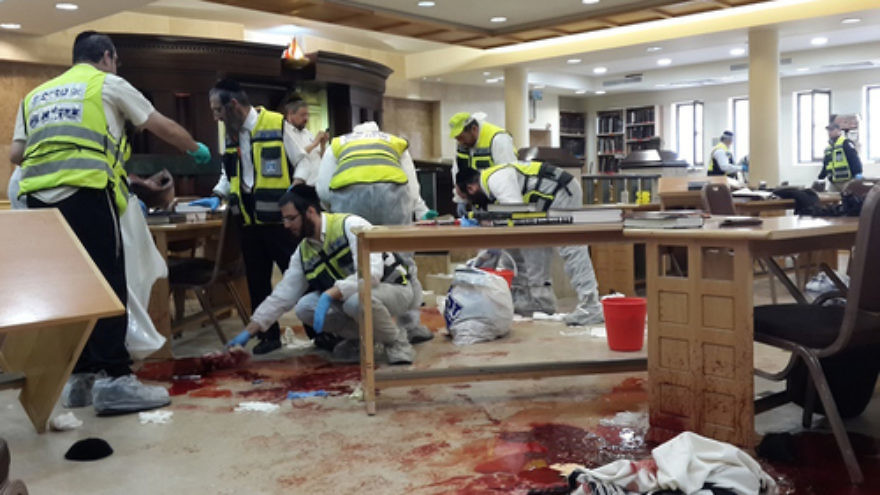 The scenario has been repeated more times than I can remember: Palestinian terrorists murder Israelis. The Obama administration condemns the attack. And that’s it. No change in U.S. policy, no penalties or consequences for those who encourage and praise the killers. The Palestinians are, quite literally, getting away with murder.

Secretary of State John Kerry condemned the Nov. 18 slaughter of four Jews in a synagogue in Jerusalem’s Har Nof neighborhood. He even acknowledged that it was “a pure result of incitement, of calls for days of rage” by the Palestinian leadership. Indeed it was. It’s too bad it took a massacre to get Secretary Kerry to admit that. If only he had spoken out against Palestinian incitement weeks or months ago.

But “speaking out” is not enough. Bland verbal condemnations of incitement don’t make any difference. Palestinian Authority (PA) President Mahmoud Abbas and has colleagues don’t take America’s words seriously. There have to be actions. The Palestinian leaders need to see that there will be real consequences for their incitement.

Secretary Kerry said that Palestinian leaders “must begin to take serious steps to restrain any kind of incitement that comes from their language, from other people’s language, and exhibit the kind of leadership that is necessary to put this region on a different path.”

But what if they don’t?  What’s he going to do about it?

Back in 1998, President Bill Clinton’s administration established a Trilateral Committee on Incitement. (That’s what Israel received in exchange for agreeing to the Wye River Memorandum.) But the committee turned out to be a farce. The Israeli members of the committee would complain about Palestinian leaders making inciting statements, and the Palestinians would respond by pointing to some individual Israeli newspaper columnist who said something strongly critical of the Palestinians, and they would say that, too, was incitement.

The problem was that the Clinton administration refused to define “incitement.” It refused to acknowledge the difference between what a Palestinian official said and what an individual Israeli pundit said. The U.S. preferred to play the “both sides are guilty” game. It was like putting Holocaust survivors and Holocaust deniers in a room together and declaring that each side has its own equally valid perspective.

President Obama’s response to the Har Nof massacre took the same “both sides” approach. He declared, “At this sensitive moment in Jerusalem, it is all the more important for Israeli and Palestinian leaders and ordinary citizens to work cooperatively together to lower tensions, reject violence, and seek a path forward towards peace.”

Calling on “Israeli and Palestinian leaders” to “lower tensions and reject violence” is saying that they are both currently not doing enough to lower tensions or reject violence. Both sides are to blame. Both sides need to act. This kind of moral equivalency is false and outrageous. Israel has done everything possible to lower tensions. Israel is the victim. The Palestinians are the aggressors. But President Obama refuses to acknowledge that simple truth.

If the Obama administration is really interested in lowering tensions and getting the Palestinians to reject violence, there is plenty it can do. Here are a few first steps:

—Revive the Trilateral Commission on Incitement, but start by defining incitement, and then impose real penalties on the inciters.

—The PA has a policy of paying salaries to Palestinian terrorists who are imprisoned by Israel. Whatever they pay the prisoners should be deducted from America’s $500-million annual aid to the PA. The PA also pays the families of terrorists who are killed in action–meaning that the families of the Jamal cousins, who carried out the Har Nof massacre, are about to receive large checks from the PA. Deduct that from the U.S. aid package, too.

—The Har Nof attack was perpetrated by the Popular Front for the Liberation of Palestine. It’s the second-largest faction in the PLO, of which Abbas is chairman. The U.S. should demand that Abbas expel the PFLP from the PLO. If he refuses, declare him to be partially responsible for the Har Nof attack, and put him on the “U.S. Watch List,” which prohibits terrorists from entering the U.S.

—There is a park in Ramallah, Mahmoud Abbas’s capital, that is named after Dalal Mughrabi, leader of the Palestinian terror squad that murdered 38 Israelis in a 1978 attack, including the niece of U.S. Senator Abraham Ribicoff. Every Palestinian child who walks those streets gets the message—he sees who is regarded as a hero, who he is supposed to emulate. The U.S. should demand that Mughrabi’s name be removed. And if Abbas refuses, there need to be consequences.

I am flying to Israel this week with a heavy heart. I am filled with grief for the families of the latest terror victims. I am worried about my children who live there and have to go to work every morning, not knowing if they will return home that night. And I am anguished by the thought that my own government could do so much to combat Palestinian terrorism—and yet chooses to do next to nothing.

Stephen M. Flatow is a New Jersey attorney whose daughter Alisa was murdered in a 1995 bus bombing by the Palestinian terrorist group Islamic Jihad.