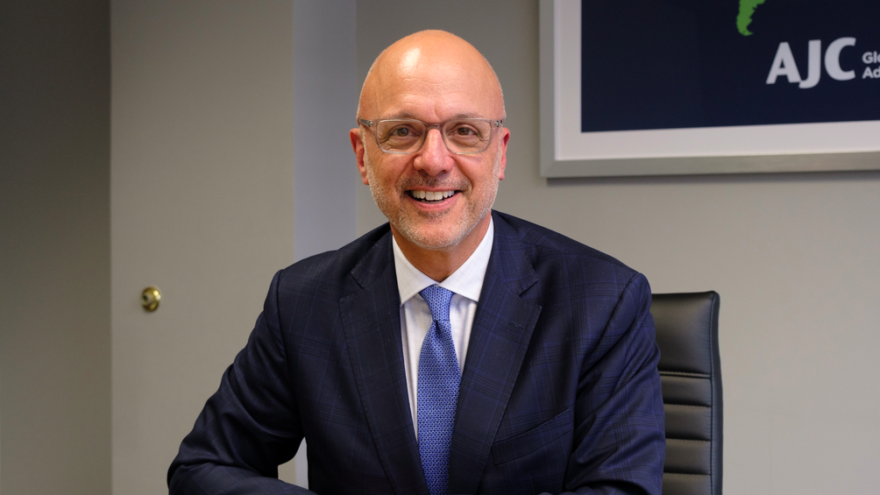 (October 21, 2022 / JNS) In an era when Israel and other issues of concern to the Jewish community are often political football, former Democratic Congressman from Florida Ted Deutch affirmed the role of the American Jewish Committee, where he took over as CEO earlier this month, as a nonpartisan pro-Israel organization.

“I have a long personal record of bipartisanship, of doing what I think is in the best interest of the Jewish community regardless of how it might be viewed in a partisan lens,” Deutch told JNS during a half-hour interview in a conference room of AJC’s Washington, D.C., office. “There’s nobody who better understands the problems created by hyper-partisanship than someone who just left the United States House of Representatives.”

He touted his record of bipartisanship when it came to foreign affairs spanning his 12 years in Congress and four years in the Florida Senate.

Those who were paying attention to his record, he said, will see that he has worked with Republicans throughout his career on key issues pertaining to Israel.

Deutch said that in the Florida Senate, he worked with the GOP-controlled legislature to craft legislation that was the first in the nation to divest Florida’s pension funds from companies helping Iran develop nuclear weapons.

The bill, which was opposed by the state’s pension fund administrators, became a model for other states to follow.

“We understood how important it was to stand up to Iran’s aggression and their nuclear weapons goals,” he said.

In Washington, his subcommittee chairmanship allowed him to work across party lines passing laws and resolutions going after the Iran-backed terrorist organization Hezbollah, standing with Israel and expanding U.S.-Israel cooperation.

As former President Barack Obama completed the Joint Comprehensive Plan of Action with Iran in 2015, Deutch was one of a small group of Democratic lawmakers to oppose his own party’s president on the deal, for reasons he said have “stood up over time.”

During heated debates over funding of additional interceptor rockets for Israel’s Iron Dome in September 2021, Deutch did not hold back from criticizing his progressive Democratic colleagues known as the “Squad” for their demonization of Israel.

“We can have an opportunity to debate lots of issues on the House floor. But to falsely characterize the State of Israel is consistent with those—let’s be clear—it’s consistent with those who advocate for the dismantling of the one Jewish state in the world. And when there is no place on the map for one Jewish state, that’s anti-Semitism, and I reject that,” he said in response to Rep. Rashida Tlaib (D-Mich.) accusing Israel of committing war crimes, human rights abuses and apartheid.

“In fact, it’s one of the things I’m most excited about in the new position is the intense focus on being nonpartisan and in doing things the way that I always have, but in doing things that more and more are unusual in Washington, which is providing an opportunity for the Jewish community to advocate for itself, all around the world, regardless of whether you come to this organization and you’re a Democrat or you’re a Republican,” he said.

But he added, just as there are many conservative Republicans who wouldn’t dare touch anti-Semitism, it’s important to note that there are many young progressives, citing Rep. Ritchie Torres (D-N.Y.) as an example.

“There are few members who are more progressive than Ritchie,” Deutch said. “Ritchie understands that being pro-Israel is consistent with his progressive views.”

While he said that there are some politicians who like to benefit in a partisan way from their support for Israel, Deutch believes that support for Israel has not become too partisan. In his experience, support for Israel is still strong and bipartisan, with lawmakers recognizing that the U.S.-Israeli relationship is critically important for both countries.

Still, he said that this support should never be taken for granted and that hard work from organizations like AJC is needed to maintain it.

Such work includes the many international and national level AJC branches throughout the country and world, numbering 24 offices across the U.S. and 14 overseas. 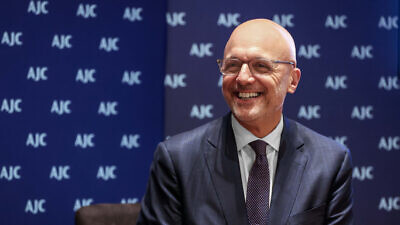 He credited his predecessor, David Harris, who served as CEO for 32 years, for building up the organization’s footprint nationally and internationally and said he plans to continue to pursue the mission of “enhancing the wellbeing of the Jewish people in Israel and advancing democratic values.”

This includes outreach to groups that have recently been targets of the anti-Israel trend of intersectionality.

Deutch said that the organization’s offices across the country work on inter-group relations, including with Black, Hispanic and Asian populations, in addition to interfaith work.

In Washington, Congressional groups such as the Black-Jewish Caucus, which was spearheaded by AJC, provide a forum to come together on issues important to both communities.

That week of the interview, reactions were still coming in after rapper Kanye West’s anti-Semitic rants on social media from the weekend, to which the caucus strongly responded.

“I think the progress is evidenced by that statement that came out today. The progress is knowing that there are partners that we can work with within communities that are different than our own, that also face challenges of their own, and being able to confront those challenges together,” Deutch said. “We can never throw up our hands and bemoan the fact that we’ve got these challenges, and that there’s anti-Semitism that we have to confront. We need to look for partners, AJC has been working hard to establish those relationships in regions all around the country.”

Advocating for the U.S.-Israel relationship and against anti-Semitism shouldn’t start when an elected official gets to Congress, he said, and the AJC has been using its local resources to advocate for Israel at various levels of government.

“We need to make sure that our mayors understand the importance of Israel and fighting anti-Semitism and that’s the Mayors Against Anti-Semitism campaign AJC has run. And we need to make sure our county commissioners and state elected [officials] understand the role that they can play in strengthening the relationship with Israel and why it matters to us,” Deutch said. “And we’re building support and allies and some of them are going to run for Congress and then it would be natural for them at that point to really be strong proponents for the U.S.-Israel alliance.”

Deutch said that he spent his whole life focused on the issues he will tackle as head of AJC.

“I’m a proud Jew and a committed Zionist. And the opportunity for me to focus 100% of my time on these issues and to advocate on behalf of the entire Jewish community around the world was a unique opportunity,” Deutch said. “I was not looking to leave Congress but it was an opportunity I couldn’t pass up.”

Deutch talked most passionately about a new window to advocate for Israel made possible by the signing of the Abraham Accords—a normalization of relations between some of Israel’s Arab neighbors in 2020.

AJC, which now has an office in Abu Dhabi, was active in helping build these relationships for decades and is now working on bringing leaders from the U.S. and Europe to Israel and the Abraham Accords member states.

“I think we need to recognize that this is a moment that we cannot let pass,” Deutch said. “That every chance we have to give people the opportunity to see Israel and the Abraham Accords countries together, and what that means for the region and for the world—that opportunity we have to take advantage of right now.”