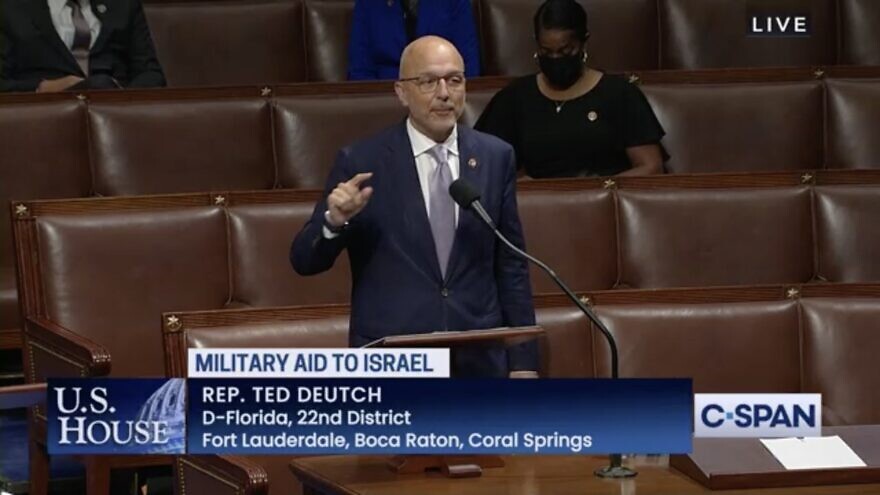 (September 23, 2021 / JNS) Pro-Israel Democrats scrambled on Thursday to restore approximately $1 billion to help fund the replenishment of Israel’s Iron Dome air-defense system after funding was stripped earlier this week from the House of Representatives’ legislation due to an effort by progressive members.

The funding had previously been included in the short-term Continuing Resolution (CR) that was passed along partisan lines on Wednesday but removed from the bill on Tuesday after Democrats realized that it would not receive support from Republicans, as it raised the debt ceiling. Facing the prospect of no Republican support to pass the bill, House Democrats sought to pass the legislation on partisan lines, needing every Democrat to vote for it.

The Congressional Progressive Caucus, led by Rep. Pramila Jayapal (D-Wash.) met with Democratic leaders on Tuesday and indicated that its members would not support the CR if the Iron Dome interceptor funding was included in the bill. The progressive caucus includes members of the far-left group of representatives known collectively as “The Squad.”

Provisions for Iron Dome funding were then removed and passed, while Republicans questioned the Democratic Party’s support for Israel.

“The Iron Dome exists to defend civilians inside our nation’s great ally, Israel, against offensive air strikes. We saw the Iron Dome’s importance and effectiveness several months ago when the terror group, Hamas, fired thousands of rockets at Israel,” Rep. Lee Zeldin (R-N.Y.), a member of the House Foreign Affairs Committee and co-chair of the House Republican Israel Caucus, said in a statement. “It’s very telling that ‘The Squad’ and their allies despise it so much. It’s even more telling that Speaker [Nancy] Pelosi and Democratic leadership are willing to put Israel’s safety at risk because they are unwilling to stand up to the most radical voices in their party.”

Despite not being able to pass the funding within the government funding bill, Rep. Rosa DeLauro (D-Conn.), chair of the House Appropriations Committee, Majority Leader Steny Hoyer (D-Md.) and a group of pro-Israel Democratic members introduced Iron Dome funding in a standalone bill on Thursday.

While the Iron Dome Supplemental Appropriations Act of 2022 enjoyed overwhelming support, it sparked heated debate on the House floor while under consideration.

Rep. Debbie Wasserman Schultz (D-Fla.) and a member of the appropriations committee said she supported the bill and was proud to help introduce it.

“I’m proud to have worked on a strategy with other pro-Israel Democrats in our House leadership to ensure there is no question about our commitment to the safety and security of our closest ally in the Middle East, Israel,” she said. “I urge the United States Senate to take up this urgent funding bill immediately to defend our ally Israel and increase prospects for peace and avoid the [continuing resolution] debt limit debate.”

Democrats throughout the debate blamed Republicans for not supporting the original bill, which would have included Iron Dome funding. Republicans said the Democratic Party was now being led by the anti-Israel, anti-Semitic members of the progressive caucus, rather than U.S. President Joe Biden, who supports funding for Iron Dome, and congressional leaders. 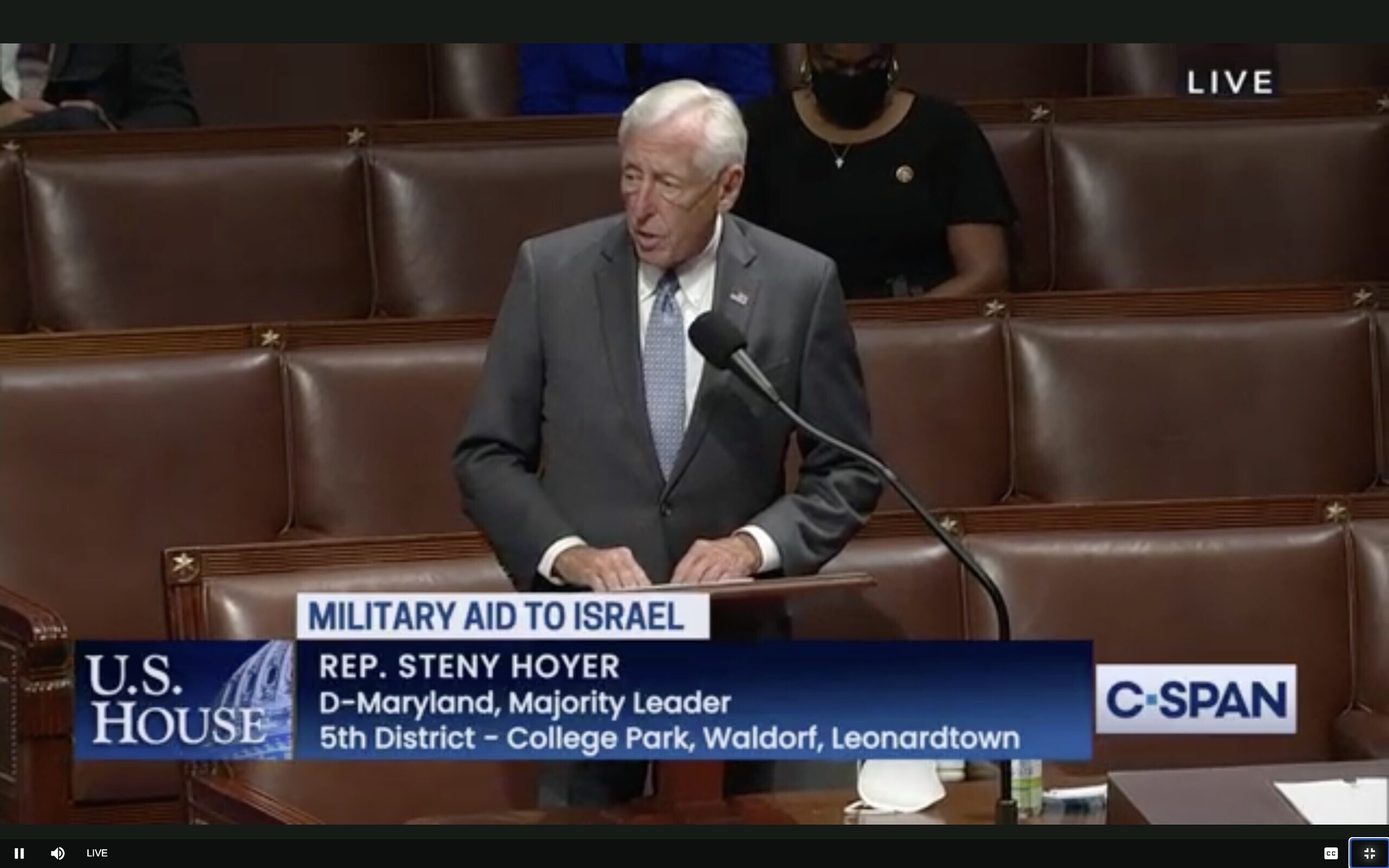 “Interestingly, we didn’t see the same visceral reaction to leaving more than a billion dollars worth of artillery in the hands of terrorists and Afghanistan as we’re seeing with this defensive system,” said Rep. Steve Womack (R-Ark.), ranking member of the House Budget Committee. “They are openly opposing a capability that protects women and children from terrorist rocket attacks.”

The debate continued along these lines until Rep. Rashida Tlaib (D-Mich.) had her turn to speak on the House floor.

“I will not support an effort to enable and support war crimes, human-rights abuses and violence. We cannot be talking only about Israelis need for safety at a time when Palestinians are living under a violent apartheid system and are dying from what, Human Rights Watch has said, are war crimes,” said Tlaib. “The bill claims to be ‘a replenishment’ for weapons apartheid Israel used in a crisis it manufactured, when it attacked worshippers at one of the most holiest Islamic locations, the Al-Aqsa Mosque, committing, again, numerous, numerous war crimes.”

Tlaib said the funding represents a 140-time increase in Iron Dome funding and that American taxpayer dollars should not go to countries that do not comply with human-rights laws.

“The Israeli government is an apartheid regime—not my words, the words of Human Rights Watch and Israel’s own human-rights watch organization B’Tselem,” she continued. “I urge my colleagues, please stand with me in supporting human rights for all.” 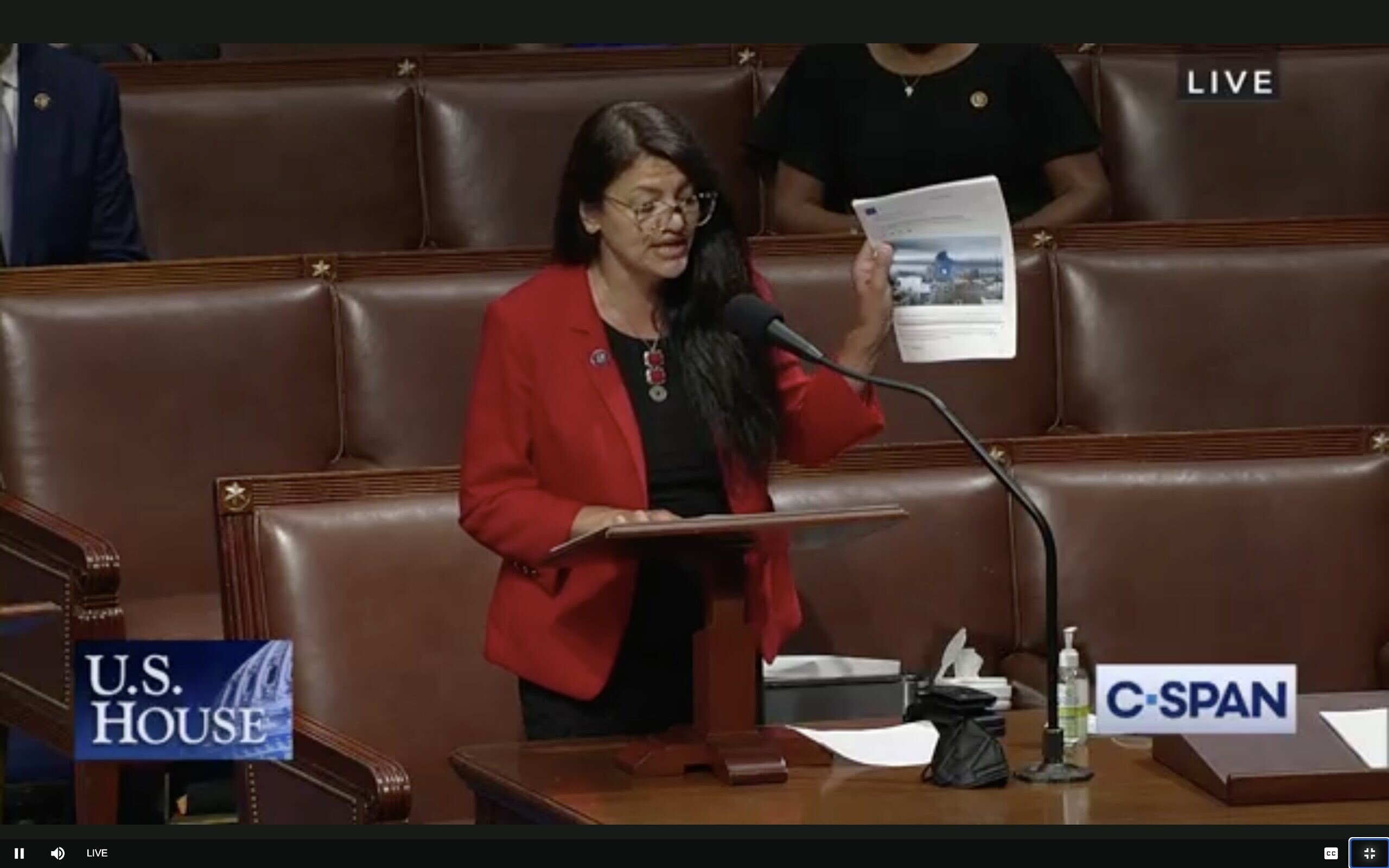 Rep. Rashida Tlaib (D-Mich.) on the floor of the House speaking about a bill to fund the Iron Dome missile-defense system to Israel. Source: Screenshot/C-SPAN.

After saving up his side’s time for most of the debate, Rep. Chuck Fleischmann (R-Tenn.) unloaded on the Democrats and Tlaib.

“Mr. Speaker, the truth is finally come out on the floor of the House in the United States of America,” he said. “I heard some of my Democratic colleagues stand with me, with Israel, with our ally, to fight terrorism with a defensive weapon system,” he said. “… We heard right now from my colleague across the aisle with a shocking statement. She opposes this because they have a vocal minority in the majority party that is anti-Israel, that is anti-Semitic, and as Americans, we can never stand for that!”

“You just saw something on this floor I thought I would never see. Not only as a member of this House, but as an American,” he said. “Let us stand with Israel, let’s combat anti-Semitism, wherever it is in the world—whether it’s in the United States, whether it’s from terrorism.”

Fleischmann’s call was answered shortly by Rep. Ted Deutch (D-Fla.), who held up a prepared speech he was going to present on the floor but decided to go off-script after Tlaib’s diatribe.

“I cannot, I cannot allow one of my colleagues to stand on the floor of the House of Representatives and label the Jewish democratic State of Israel an apartheid state. I reject it,” said Deutch. “Today, this caucus, this body, the House of Representatives, will overwhelmingly stand with our ally the state of Israel in replenishing this defensive system. If you believe in human rights, if you believe in saving lives—Israeli lives and Palestinian lives—I say to my colleague, who just besmirched our ally, then you will support this legislation.

Hoyer pushed back against the Republicans accusing Democrats of not supporting Israel by pointing out that had Republicans supported the CR, the supplemental appropriations bill would not have been necessary.

“This is not a partisan issue. And very frankly, the [Continuing Resolution] that was brought to the floor the other day would have said we are going to pay the debts of the United States because we don’t welch, and we are going to fund Iron Dome,” said Hoyer. “Unfortunately, because to a person, our Republican colleagues would have refused and said they would not vote for that resolution … we could not pass it.”

“While a small handful of anti-Israel lawmakers sought to strip these vital funds from an earlier bill, Democratic leadership and the vast majority of House Democrats quickly voiced their support for Israel’s right to defend itself and vowed to replenish Iron Dome by passing a standalone funding bill,” Mark Mellman, president and CEO of Democratic Majority for Israel, said in a news release.

“Iron Dome, co-developed by the United States and Israel, is used to protect all Israelis—Jewish and Arab alike—from incoming missile attacks. By ensuring this purely defensive and life-saving system remains capable of neutralizing rocket threats, the U.S. helps disincentivize terrorists in Gaza and throughout the region,” he added.

In a news release, AIPAC thanked Democrats and Republicans for passing the bill, saying that not only does it show there is a solid bipartisan majority supporting Israel’s security in Congress, it also repudiates those who would undermine the U.S.-Israeli relationship. AIPAC urged the Senate to move quickly to pass the legislation.

While praising the overwhelming support for the bill, Nathan Diament, executive director for public policy at the Orthodox Union, said he was troubled that some Congress members had the “misguided view that a missile-defense system does anything other than defend innocent civilians from attacks launched by hostile terrorist groups and thus delayed this important strategic funding.”