(November 14, 2022 / Israel21c) Nadav Israeli smiles as he peers through binoculars at a flock of Eurasian jackdaws soaring over Kibbutz Kfar Ruppin in the Jordan Valley.

It’s mid-September, the beginning of a migration season, when about 500 million birds rest and feed in Israel on their journey from Europe and Asia to Africa.

“Israel is the last ‘gas station’ for 3,000 kilometers. If they don’t find enough food here, they won’t make it over the Sahara Desert,” explains Israeli, northern project manager of BirdLife Israel for the Society for the Protection of Nature in Israel (SPNI).

Until a year ago, migrating birds had fewer places to stop on their trek across Israel.

Like many kibbutzim in this part of the Jordan Valley, Kfar Ruppin sits on spring-fed wetlands whose water sources were diverted in the 1930s to establish fish farms. Ecologically, this policy spelled disaster.

“Fish farming wasn’t great for the birds or the wildlife,” says Israeli, who was raised on another fish-farming kibbutz, Ayelet Hashachar, near the Hula Nature Reserve.

With millions of birds, reptiles, amphibians and small mammals in need of habitats, SPNI decided to shift the paradigm for nature protection from preservation to rewilding.

Kfar Ruppin was chosen as the pilot site for this bold, $11 million project, dubbed Start-Up Nature.

What happened at Hula

To understand the significance of Start-Up Nature, let’s take a brief detour north to the Hula Valley in the Upper Galilee.

The 3.3-mile-long marshy Lake Hula was drained in the 1950s to create agricultural fields — not to control malaria-carrying mosquitoes, as is popularly believed. That ill-conceived tactic had been discontinued by then because malaria was largely eradicated in Israel. Moreover, ecologists understood that healthy biodiversity keeps swamp mosquito populations under control naturally. 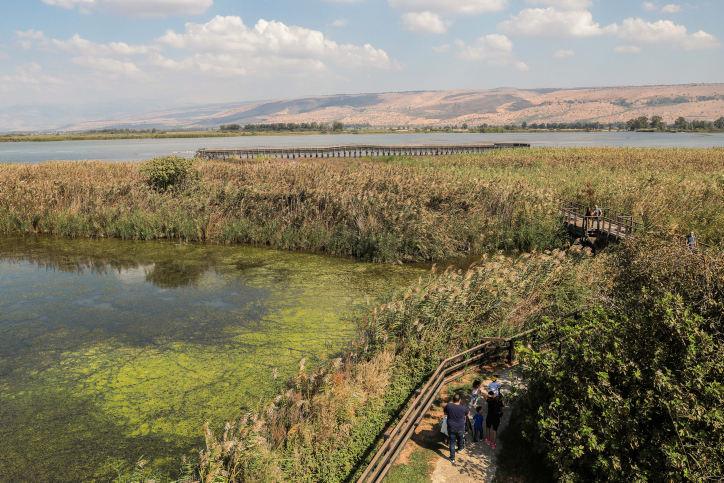 In the 1990s, Keren Kayemeth L’Israel-Jewish National Fund (KKL-JNF) led a national project to restore a small portion of Hula Lake to its essential place in the ecosystem. “Israel had close to 200,000 dunams of natural wetlands until about 150 years ago. Now we’re left with less than 10 percent,” says Israeli.

Start-Up Nature seeks to create “mini-Hulas” across Israel to achieve a better balance of nature for the benefit of birds and the entire ecosystem—including humans. Start-Up Nature is the brainchild of SPNI Director of Nature Conservation and Environmental Protection Dan Alon, who played a crucial role in figuring out how the myriad flocks that came back to the Hula Valley could coexist with the area’s farms.

“What I’ve observed over three decades is that in our small, crowded country, development needs and climate change have quickened the pace of environmental degradation,” said Alon. “In terms of crucial habitats needed to sustain the annual migration of a half billion birds, there just aren’t enough wild wetlands to protect—the water has been used up, dried up or diverted to agriculture.”

But over the past 15 years, fish farming in Israel became difficult as water prices rose and imported fish prices dropped. While Israel does need more renewable energy, said Alon, “solar fields should be on places where they don’t conflict with nature. All these fish farms are located on freshwater streams.” A view of the Ashalim solar-power station in the Negev Desert, June 19, 2018. Photo by Miriam Alster/Flash90.

Through Start-Up Nature, kibbutzim have another choice: they can work with SPNI to reestablish wetlands and build ecotourism sites.

“Rewilding has more benefits than we originally thought, not only for the sake of biodiversity but also for capturing and storing carbon, as well as for education and tourism,” says Israeli.

One company, Terrra, plans an initiative with SPNI to trade the carbon offset from the Kfar Ruppin site and invest the money into further rewilding projects.

“These 200 dunams [50 acres] will not save the world by offsetting all the carbon emissions, nor will rewilding at least 10,000 dunams (2,471 acres) around Israel that we hope to do, but it can serve as an example and help us rewild more land,” said Israeli.

Both sides of the Jordan

“Start-Up Nature represents the best of what Israel is: Vision, innovation, and the Jewish values of humanity and responsibility,” said Leshem. Professor Yossi Leshem, director of the International Center for the Study of Bird Migration of Latrun, seen together with contestants looking through their binoculars in the “First International Champions of the Flyway”—a 24-hour bird-spotting competition in Eilat and the Negev, April 1, 2014. Photo by Nati Shohat/Flash90.

Leshem’s close Jordanian ties are enabling Start-Up Nature to inspire similar projects over the border running alongside Kfar Ruppin. The original wetlands in Jordan, like other countries in the Mediterranean basin such as Turkey, Syria and Lebanon, have all but disappeared.

Gen. Mansour Abu Rashid, chairman of Amman Institute for Peace and Development and a longtime SPNI partner, has secured initial permits in Jordan to start a pilot on the other side of the fence.

Bringing back the water

Standing on a ridge overlooking the border and the Amud Reservoir—a former commercial fishpond filled with reeds that will be mowed before winter—Israeli explains that this scenic spot between the Gilboa and Gilad mountains was once a floodplain for the Jordan River.

In the 1930s, the Degania dam was built to regulate flow from the Sea of Galilee into the lower Jordan River, and the river’s curve was blocked to create the reservoir for Kfar Ruppin’s fish farms, fed by the Jordan River and underground springs.

After the fish operation ceased, the kibbutz tried unsuccessfully to grow wheat in the former reservoir.

“Now we are jointly growing nature here,” Israeli said. “All we need to do is bring back the water.”

When the Amud Reservoir rewilding began in February 2021, he said, “the Israel Nature and Parks Authority was already returning to nature many of the area’s underground streams, and we worked together to make a little diversion to bring the water here through gravitation.” Israelis hike in the Nahal Amud nature reserve in northern Israel during the Passover holiday, on April 17, 2022. Photo by David Cohen/Flash90.

It wasn’t long before dozens of species of birds, waterfowl and wildlife found their way to the Amud Reservoir.

“I was amazed by how quickly they came,” said Israeli.

“By springtime, the reservoir was hopping with life. You could hear the toads and frogs singing at night; it was amazing. We will get jungle cats, otters, wild boars, jackals and caracals here,” he predicted.

“We are basically doing Creation here, and it’s not easy,” Israeli said with a smile.

“Even with advice from the biggest experts in Israel, we make mistakes all the time. But that’s what a pilot is for,” he added.

“We will learn what works and what doesn’t and then copy-paste the idea of gradually rewilding agricultural land in other places. Only it will look different in every place because the soil and temperature and water systems are different.” The second Start-Up Nature project has begun on the Mediterranean coast at Kibbutz Ma’agan Michael, which sits on another major bird migration flyway.

The 33-acre Ma’agan Michael plan includes four ponds, a visitor center, wheelchair-accessible trails, bird hides and blinds, and a migration research outpost in collaboration with the University of Haifa. A view of the sea from Kibbutz Ma’agan Michael, on the Mediterranean coast of Israel. June 16, 2012. Photo by Moshe Shai/Flash90.

Build it and they will come

According to the newest State of the World’s Birds report from BirdLife International, nearly half of all bird species are dwindling due to intensive agriculture, logging, invasive species, exploitation of natural resources and climate change.

The restored Amud Reservoir, and a birding park constructed last year elsewhere in Kfar Ruppin, are fighting this trend by offering birds a healthy habitat and a waystation. Feathered adventurers find this destination instinctively—no Waze necessary. Sitting in a wooden hide built next to a pond, Israeli raised his binoculars and sees barn swallows winging their way from Scandinavia to Africa. He saw black-footed kites and other raptors flying through from eastern Europe and western Asia.

“This area wasn’t a natural wetland before,” he explained. “There were several fishponds here and a small stream. We’re diverting the stream’s water to make small birding ponds next to birding hides.”

A public birding center and lodges in the kibbutz accommodate day trippers and overnight birdwatchers.

“We can bring school groups and teach them about habitat restoration and management and why it is important. We can teach them about Israel as a migration hotspot and the integration of water and land that all life relies on,” said Israeli.

Alon points out that the rewilded areas are “not only going to save rare species such as the greater spotted eagle and the black francolin, but they’re also good for people and the economy” by potentially generating millions of ecotourism dollars.

Thinking outside the box

Worldwide rewilding initiatives have been progressing for years, with the dual aims of wildlife conservation and sequestering excess carbon emissions. Wetlands are even better than forests at capturing and holding carbon, said Israeli.

In Europe and North America, land can be purchased by NGOs for habitat restoration. But in Israel, land can only be leased. SPNI therefore can’t buy land for Start-Up Nature, but rather works in cooperation with the kibbutzim and raises money to maintain the projects.

“What other countries can learn from this is to think outside the box, and that’s why we call it Start-Up Nature—it uses the Israeli way of thinking creatively to achieve our goals,” said Israeli.

“The contractors left the area a year ago and now we have a professional gardener who comes with a team of specialists to take care of the plants. The gardener says that in the entire north of Israel, he’s never seen such healthy vegetation—close to 50 different species.”

The early success of the Kfar Ruppin project is encouraging, but it remains to be seen how well it achieves those goals.

“In rewilding projects around the world, it takes 10 to 15 years before a habitat goes back to full capacity. In arid habitats, it can take hundreds of years to regrow,” Israeli explained.

I ask Israeli what level of capacity Kfar Ruppin Wetland Reserve has reached in its first year.

“How does that song go?” he replied. “We’ve only just begun.”

No matter where you live, you can see Israeli nature live and up close via bimonthly webinars offered by the Society for the Protection of Nature in Israel. To access past webinars and register for future webinars, click here.