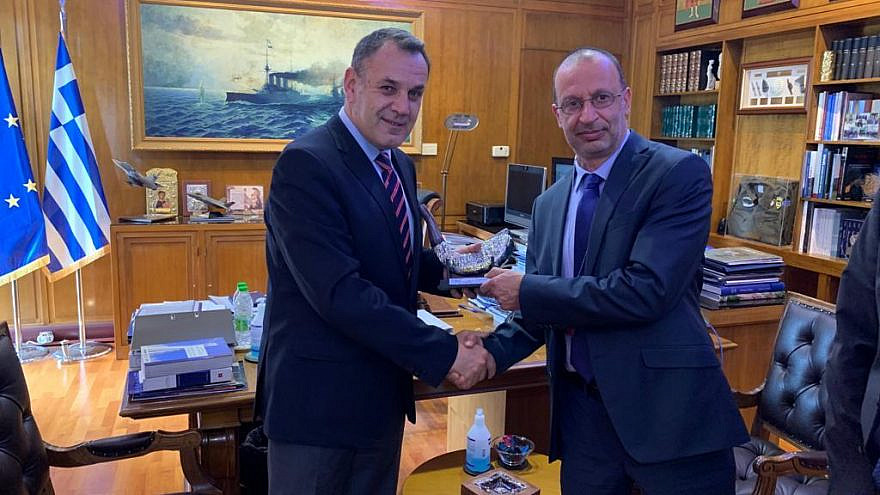 (April 21, 2021 / JNS) In the biggest defense agreement yet between Israel and Greece, officials from both countries signed a government-to-government contract last week in Athens, which will see Israel’s Elbit Systems company construct a state-of-the-art international flight training center in Greece.

The agreement, worth approximately $1.6 billion, assigns Elbit to establish and operate the center for 22 years.

Yoram Shmuely, executive vice president and general manager of Elbit’s Aerospace Division, told JNS on Tuesday that the sector of military pilot training worldwide suffers from shortages and pressure, whether for combat or transport aircraft aircrews.

The process of training air personnel is long, taking between two to three years. Many states send their teams to the United States for training since they lack their own facilities, explained Shmuely, resulting in an expensive process. The Americans, for their part, are themselves busy and not rushing to train foreign aircrews.

“As a result, there has been pressure in this area for a while,” said Shmuely.

Elbit has become involved in every stage of Israel Air Force training and is now using this same experience and infrastructure to construct training centers overseas. In fact, it is currently operating the flight training center for the Royal Air Force in the United Kingdom via its British partner, the KBR company. Now, it is set to begin building a new training center in Greece. 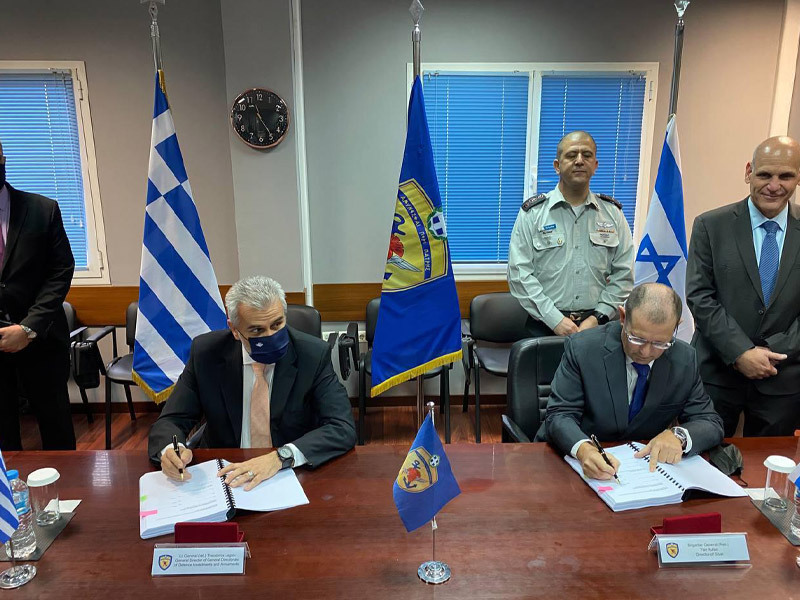 The Greece-Israel signing ceremony in Athens: At right is Brig. Gen. (Res.) Yair Kulas, head of the International Defense Cooperation Directorate at the Defense Ministry, and on the left is Greece’s Director-General of the General Directorate of Defense Investments and Armaments, Lt. Gen. Theodoros Lagios, April 16, 2021. Credit: Israeli Defense Ministry.

‘This is how you build a strategic alliance’

The contract was made possible due to geostrategic trends that have seen an Israeli-Greek alliance blossom in recent years with each country guided by its own threat assessments and regional interests.

Just this week, Israeli F-15 and F-16 jets took part in a joint air drill with the Hellenic Air Force in Greece, an exercise that includes reserve pilots who are Elbit employees.

“The agreement involves the setting up all infrastructure, platforms and simulators,” said Shmuely, adding that “the flight school will be designed to be international.”

Greece is planning to extend the center to include the participation of some of its allies, a development that will end up significantly expanding the training center with time.

Under the agreement, Elbit will supply the Greek center with 10 M-346 training aircraft (produced by Italian company Leonardo) and will install upgrades onboard the Hellenic Air Force’s T-6 training aircraft. These aircraft are used by the IAF for training as well.

“There are lots of similarities with the IAF’s training center,” Shmuely confirmed, both with the ground-based simulators and the techniques that will be used to train pilots in the air. “The training systems onboard the planes mean we can inject training scenarios as they fly. They can train against aircraft that don’t exist in the air as they fly.”

The training system activates the plane’s radar, combat systems and other systems, making the training highly realistic. The crews can practice attacking missions or defending against threats like surface-to-air missile batteries and enemy aircraft.

“They will have to deal with those surroundings. This is how the IAF trains; the concept will enter the training center in Greece, too,” said Shmuely.

At the same time, he said, not all training needs are similar since each air force has its own scenarios and interests.

In the past, air forces used to handle training on their own, buying aircraft and simulators and training their aircrews in processes that were both expensive and inefficient, said Shmuely. As budget-related needs for efficiency arose, air forces began outsourcing these services to more efficient civilian defense companies, he noted.

The center in Greece will take about four years to set up and enter into full capacity.

Shmuely paid tribute to the close cooperation with the Israeli Defense Ministry, calling the connection with it “especially important in achieving something that goes beyond business interests. It promotes strategic alliances, creating links between the two air forces and two defense ministries. This is how you build a strategic alliance. It is based on friendship built over years, not just a meeting between officials.”