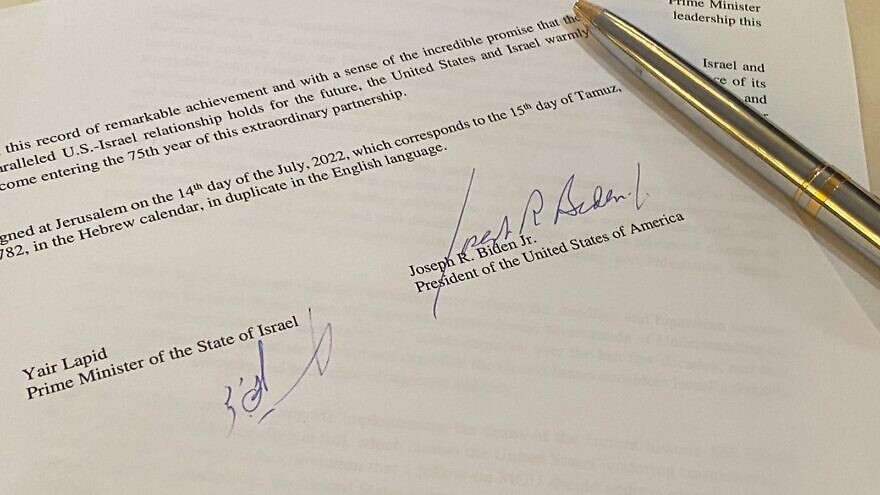 (July 14, 2022 / JNS) The following is the full text of the The Jerusalem U.S.-Israel Strategic Partnership Joint Declaration, signed in Jerusalem on July 14, 2022, by U.S. President Joe Biden and Israeli Prime Minister Yair Lapid:

The leaders of the United States and Israel, President Biden and Prime Minister Lapid, met in Jerusalem on 14 July 2022, and adopted the following Joint Declaration on the US-Israel Strategic Partnership:

The United States and Israel reaffirm the unbreakable bonds between our two countries and the enduring commitment of the United States to Israel’s security. Our countries further reaffirm that the strategic U.S.-Israel partnership is based on a bedrock of shared values, shared interests, and true friendship. Furthermore, the United States and Israel affirm that among the values the countries share is an unwavering commitment to democracy, the rule of law, and the calling of “Tikkun Olam,” repairing the world. The leaders express appreciation to former Prime Minister Bennett, who led the most diverse government in Israel’s history, and under whose leadership this extraordinary partnership has continued to grow stronger.

The United States stresses that integral to this pledge is the commitment never to allow Iran to acquire a nuclear weapon, and that it is prepared to use all elements of its national power to ensure that outcome. The United States further affirms the commitment to work together with other partners to confront Iran’s aggression and destabilizing activities, whether advanced directly or through proxies and terrorist organizations such as Hezbollah, Hamas, and Palestinian Islamic Jihad.

The United States strongly supports implementing the terms of the current historic $38 billion Memorandum of Understanding in full, which honors the United States’ enduring commitment to Israel’s security, as well as its conviction that a follow-on MOU should address emerging threats and new realities. In addition, the United States is committed to seeking additional missile defense assistance in excess of MOU levels, in exceptional circumstances such as the hostilities with Hamas over eleven days in May 2021. Israel appreciates the U.S. commitment to the MOU and for providing an additional $1 billion over MOU levels in supplemental missile defense funding following the 2021 conflict. Further, the countries express enthusiasm to move forward the U.S.-Israel defense partnership through cooperation in cutting-edge defense technologies such as high energy laser weapons systems to defend the skies of Israel and in the future those of other U.S. and Israel security partners.

Israel thanks the United States for its ongoing and extensive support for deepening and broadening the historic Abraham Accords. The countries affirm that Israel’s peace and normalization agreements with the United Arab Emirates, Bahrain, and Morocco constitute a critical addition to Israel’s strategic peace treaties with Egypt and Jordan, all of which are important to the future of the Middle East region and to the cause of regional security, prosperity, and peace. The countries note that the historic Negev Summit, initiated and hosted by Prime Minister Lapid, was a landmark event in joint U.S.-Israeli efforts to build a new regional framework that is changing the face of the Middle East.

The United States and Israel welcome in this regard the meeting held in Manama, Bahrain on June 27th, forming the Negev Forum on regional cooperation. The United States welcomes these developments and is committed to continue playing an active role, including in the context of President Biden’s upcoming visit to Saudi Arabia, in building a robust regional architecture; to deepen the ties between Israel and all of its regional partners; to advance Israel’s regional integration over time; and to expand the circle of peace to include ever more Arab and Muslim States.

The United States and Israel also welcome the opportunity to participate in a quadrilateral (hybrid) meeting, together with the leaders of India and the United Arab Emirates, in the context of the I2U2 initiative, bringing together these four countries to advance cooperation in economy and strategic infrastructure, and demonstrating the importance of this new partnership, first launched by their Foreign Ministers in October 2021.

The United States and Israel reiterate their concerns regarding the ongoing attacks against Ukraine, their commitment to Ukraine’s sovereignty and territorial integrity, and affirm the importance of continued humanitarian assistance to the people of Ukraine.

The United States and Israel affirm that they will continue to work together to combat all efforts to boycott or de-legitimize Israel, to deny its right to self-defense, or to unfairly single it out in any forum, including at the United Nations or the International Criminal Court. While fully respecting the right to freedom of expression, they firmly reject the BDS campaign. The two countries will use the tools at their disposal to fight every scourge and source of antisemitism and to respond whenever legitimate criticism crosses over into bigotry and hatred or attempts to undermine Israel’s rightful and legitimate place among the family of nations. In this context, they express their deep concern over the global surge in antisemitism and reassert their commitment to counter this ancient hatred in all of its manifestations. The United States is proud to stand with the Jewish and democratic State of Israel, and with its people, whose uncommon courage, resilience, and spirit of innovation are an inspiration to so many worldwide.

The United States and Israel commit to continuing to discuss the challenges and opportunities in Israeli-Palestinian relations. The countries condemn the deplorable series of terrorist attacks against Israeli citizens in recent months and affirm the need to confront radical forces, such as Hamas, seeking to inflame tension and instigate violence and terrorism. President Biden reaffirms his longstanding and consistent support of a two-state solution and for advancing toward a reality in which Israelis and Palestinians alike can enjoy equal measures of security, freedom and prosperity. The United States stands ready to work with Israel, the Palestinian Authority, and regional stakeholders toward that goal. The leaders also affirm their shared commitment to initiatives that strengthen the Palestinian economy and improve the quality of life of Palestinians.

The United States and Israel enjoy extensive bilateral cooperation and dialogue between their two countries in many critical spheres – from groundbreaking collaboration in science and technology, to unique intelligence sharing and joint military exercises, to shared efforts in confronting pressing global challenges such as climate change, food security, and healthcare. To complement the extensive existing scientific and technological cooperation between their two countries, and to bring their cooperation to a new height, the leaders launched a new U.S.-Israel Strategic High-Level Dialogue on Technology to form a U.S.-Israel technological partnership in critical and emerging technologies, as well as in areas of global concern: pandemic preparedness, climate change, artificial intelligence, and trusted technology. This new technological partnership will be designed to boost the countries’ mutual innovation ecosystems and address geostrategic challenges.

In this same spirit, the United States and Israel affirm their commitment to continue their shared and accelerated efforts to enable Israeli passport holders to be included in the U.S. Visa Waiver Program as soon as possible, as well as their support for increased collaboration on operational cyber exchange and on combatting cybercrime. The leaders state that all of these initiatives, and countless other joint endeavors, undertaken between their peoples at every level of government and civil society demonstrate that the U.S.-Israel strategic partnership is indispensable and makes an outsized contribution not only to the good of American and Israeli citizens but also to the good of the Middle East and of the world.

With this record of remarkable achievement and with a sense of the incredible promise that the unparalleled U.S.-Israel relationship holds for the future, the United States and Israel warmly welcome entering the 75th year of this extraordinary partnership.