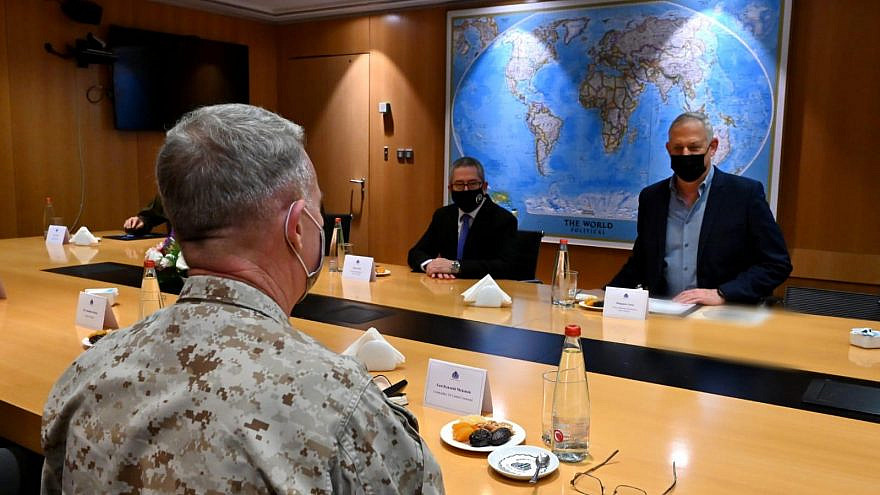 (January 29, 2021 / JNS) The commander of the United States Central Command, Gen. Kenneth McKenzie, arrived in Israel on Thursday to meet with senior defense officials to discuss regional priorities and challenges, including the Iranian threat.

McKenzie met with Israeli Defense Minister Benny Gantz on Friday to talk about the “importance of the close collaboration and coordination between the Israeli and American armed forces, vital to the shared interests of the two countries and to regional and global stability,” according to the Defense Minister’s office.

Gantz and McKenzie were joined by Israel Defense Forces Chief of Staff Aviv Kochavi, who briefed the U.S. commander on Israel’s defense policy. Earlier this week, Kochavi warned the Biden administration not to rejoin or renegotiate the Iran nuclear deal.

The visit by McKenzie is the first since it was announced that Israel was being transferred to CENTCOM from the Pentagon’s European Command. The decision, which was made in the last days of the Trump administration, places Israel with other Middle East countries, such as Saudi Arabia, the United Arab Emirates and Qatar, among others.

In the past, concern was expressed that placing Israel in CENTCOM could create friction with America’s Arab allies. In light of the Abraham Accords and the shared threat of Iran, this issue has diminished.