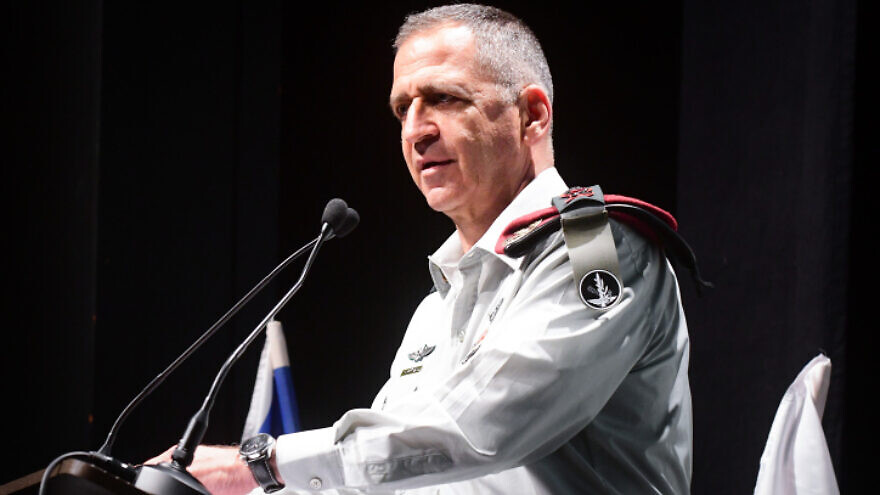 IDF Chief of Staff Aviv Kochavi speaks at a conference of the Union of Local Authorities ahead of the opening of the school year in Ganei Tikva on Aug. 18, 2022. Photo by Avshalom Sassoni/Flash90.
Spread the word.
Help JNS grow!
Share now:

(November 27, 2022 / JNS) Israel Defense Forces Chief of Staff Lt. Gen. Aviv Kochavi on Saturday called on soldiers to strive for “winning while maintaining humanity,” after two soldiers were suspended on Friday following a filmed confrontation with left-wing activists in Hebron.

The footage showed one soldier, from the Givati infantry brigade, praising National Security Minister Itamar Ben-Gvir, telling left-wing activists that the minister would “create order here,” while a second is seen grabbing the head of an activist, wrestling him to the ground, and punching him in the face.

Both soldiers have been suspended.

In a letter, Kochavi wrote, “At the end of last week, we also witnessed an IDF soldier who did not only act in opposition to the IDF’s values and speak profanely toward civilians, but also expressed himself politically … The IDF is a people’s army, which has no room for expressing political views or taking actions that derive from political considerations.”

Kochavi praised the IDF for fulfilling its “mission as the Israel Defense Forces every day,” saying “it prevents many terrorist attacks by operating military personnel in a professional and ethical manner. The units of the IDF operating in ‘Operation Break the Wave’ are worthy of all gratitude, particularly due to the complex challenges they face, the foremost among them conducting operational activity in densely populated areas.”

However, he added, “Unfortunately, unlike the use of force customary to the IDF, which is carried out in a professional, legal and ethical manner, several cases of violent and unjustified use of force have occurred recently, including this past weekend. These incidents included severe verbal and physical violence toward both Israelis and Palestinians … IDF soldiers are permitted to use force in accordance with defined principles and rules, and they have the authorities and tools required to do so. That said, they are strictly prohibited from using force when unnecessary: when it is not necessary to carry out the mission, when it is not necessary for self defense, and certainly not because of a loss of temper or to take revenge. Any incident of this sort is severe, wrong, unethical and unlawful.”

Kochavi went on to write that “incidents such as these tarnish the name of the unit in which the soldier serves, the name of the IDF and the name of the State of Israel. I am aware of the complicated reality in which you operate and the challenges you are faced with. It is truly complex, but properly balancing the operation of force and the restraint of force is part of the professionalism and set of values expected of a soldier and a commander. The vast majority of IDF soldiers do not behave this way; on the contrary, abnormal behavior such as this requires denunciation and severe punishment. “

In a statement on Friday, the IDF said that “a physical and verbal violent altercation occurred between IDF soldiers and civilians in the area of the city of Hebron. The actions of the soldiers as documented are severe and not in accordance with the values of the IDF. The incident will be investigated by the Commanding Officer of the Central Command, Maj. Gen. Yehuda Fuchs, and the violent incident will also be investigated by the Military Police. the findings will be passed on for the Military Advocate’s examination.”

Responding to the incident, Ben-Gvir stated, “I don’t like punches in anyone’s face, but we must examine what happened from the start. The fact that a soldier shouted ‘Ben-Gvir’ is a reason to suspend him? I’m asking for clarifications of this in the Cabinet. To give our soldiers backing. To see what is being done to them in Hebron,” he said, according to Israel News Network.