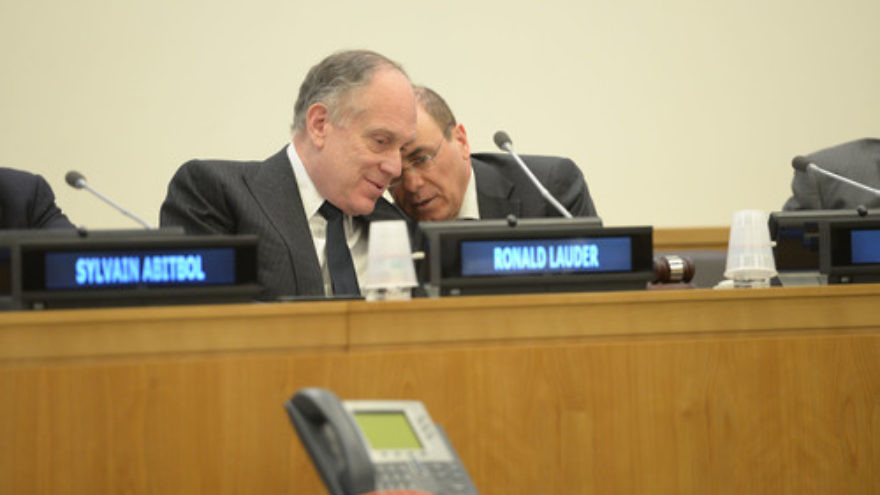 (November 25, 2013 / JNS) NEW YORK—On a boat departing Egypt for America in 1963, Lucette Lagnado’s father screamed “Take us back to Cairo!” He would never come to peace with how his family of six was forced to flee Egypt—together with 850,000 other Jewish refugees from Arab countries following the establishment of Israel—and neither has Lucette, author of two books on the subject, including her award-winning childhood memoir “The Man in the White Sharkskin Suit: My Family’s Exodus from Old Cairo to the New World.”

Asked if writing on her family’s experience has been therapeutic, Lagando said it has rather been“necessary.”

“It’s like a wound that doesn’t heal, ever,” she told JNS.org. “I really believe that. There’s never a point where I think, ‘Aha, I’ve come to terms with this.’ It’s a relentless battle.”

On the front line of that battle, according to Jewish and Israeli leaders, is the United Nations. Since 1947, among the 687 U.N. resolutions on the Israeli-Palestinian conflict, 101 have referenced Palestinian refugees, but none have called attention to the plight of Jewish refugees from Arab nations.

“Over the last 65 years, the U.N. and its agencies have spent tens of billions of dollars on Palestinian refugees, but not a cent on Jewish refugees,” said Silvan Shalom—Israel’s Minister of Energy and Water, whose grandfather was once the leader of the Jewish community in Gabes, Tunisia—during a Nov. 21 conference on Jewish refugees at the U.N. titled “The Untold Story of the Middle East.”

The story of Jews expelled from Iraq has recently drawn significant attention due to the current exhibition in Washington, DC of 24 artifacts from the “Iraqi Jewish Archive,” a collection of 2,700 Jewish books and documents recovered in 2003 in the basement of the Iraqi intelligence ministry and restored by the National Archives and Records Administration. The U.S. has said it plans to return the archive to the Iraqi government following the exhibition, in line with a written agreement between the two countries, but Iraqi Jews say Saddam Hussein’s government confiscated the materials from them.

Malcolm Hoenlein, executive vice chairman of the Conference of Presidents of Major American Jewish Organizations, at the U.N. conference reiterated a recent statement issued by 42 groups, addressed to Secretary of State John Kerry, that the archive should be protected and remain continually accessible to Jews.

“We urge our government not to send them back to an uncertain fate in Iraq, where hundreds of holy Torah scrolls remain in disuse and decay,” Hoenlein said.

Israeli Ambassador to the U.N. Ron Prosor told JNS.org regarding the Iraqi archive, “There were a lot of resources and assets put together in order to compile it the way it is; it was saved, and we don’t want it to be lost again.” Robert Singer, CEO of the World Jewish Congress, told JNS.org that the fact that 42 groups signed the statement to Kerry shows “a unified position of the Jewish community on this issue.”

Middle East affairs commentator Linda Menuchin fled Iraq in 1970, and her mother and sister left afterward, but her father stayed and was abducted on the eve of Yom Kippur in 1972. At the conference, she said Iraq’s policies toward Jews included cutting off their phone lines, banning them from university, and forbidding them from traveling farther than 80 kilometers from home. She said her father was adamant about waiting for a passport before leaving Iraq and “cared for Iraq and the Iraqis.”

“I don’t know if he ever imagined that Iraq would betray him the way it did,” Menuchin said.

The story of Menuchin’s family and her father’s disappearance is documented in the film “Shadow in Baghdad.”

“I lend my voice to this story because I believe that… telling the truth is very important for reconciliation,” Menuchin said.

After the establishment of Israel in 1948, Egyptians raided the family home of Levana Zamir, who is now president of the International Association of Jews from Egypt. Authorities took her uncle to prison, where he remained for two years, and confiscated the printing house owned by her family.

“All of the sudden for me, being a Jew was a crime,” she recalled at the conference.

Zamir’s family would move first to France and later to Israel, which she called “a huge refugee camp.”

“More than 55 percent of Israeli citizens are refugees from Arab countries,” she said, calling the state of Israel “a miracle.”

Israeli minister Shalom said that in Tunisia, where his family lived, the government outlawed Jewish courts and community councils in 1958, while synagogues and Jewish cemeteries were desecrated.

“We packed up what we were able to take with us and began the dangerous journey to Israel,” he said. His family would settle in a small apartment in Be’ersheva.

Shalom said the land confiscated from the Jews of Arab countries amounted to 40,000 square miles.

“Arab countries must accept responsibility for the billions of dollars of property they confiscated,” he said, adding that the U.N. “must also accept its share of responsibility.”

The Canadian parliament, meanwhile, recently recommended that Canada officially recognize and encourage the need for justice for Jewish refugees from Arab countries as part of any resolution to the Arab-Israeli conflict. World Jewish Congress President Ronald Lauder said at the conference, “We hope that all countries follow Canada’s lead.” Also commenting on the Canadian initiative, Hoenlein said it should be replicated and that “recognition of the truth can only help foster a better climate for peace.”

Prosor said Jewish refugees who settled in Israel “went on to become some of our greatest statesman” and “lifted the state of Israel to new heights.” He said he has made it his mission to tell the Jewish refugees’ story on the global stage of the U.N.

“Open the doors of this institution to the forgotten Jewish refugees,” he urged.

Sylvain Abitbol, executive vice chairman of Justice for Jews from Arab Countries, was born in Morocco and said he was “one of the lucky ones” compared to Jews from less tolerant Arab countries. Yet Moroccan Jews still felt compelled to leave, he said.

Asking the crowd at the U.N. why now is the time for a push for greater recognition of Jewish refugees from Arab countries, he pointed to the need to respond to current detractors of Israel who call the country an illegitimate state.

“We must underscore in every opportunity that Jews are indigenous people of the Middle East,” Abitbol said.